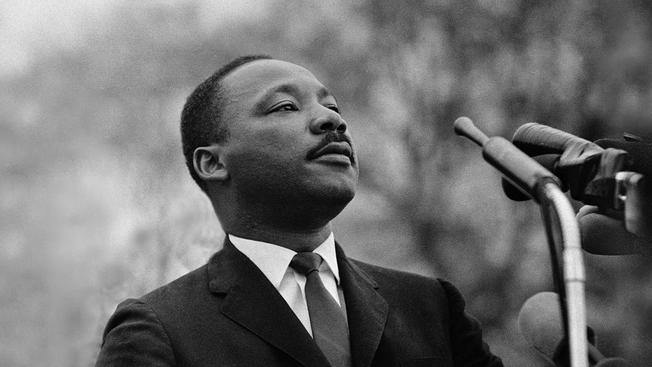 In the basement of Mother Bethel African Methodist Episcopal Church at Sixth and Lombard Streets, a slab seals the tomb of founder Richard Allen.

“I have fought the good fight,” read the lines of Scripture carved on the stone. “I have finished my course. I have kept the faith.”

The final words urge anyone reading to “go and do likewise.”

Outside at the intersection on Monday, thousands gathered to honor the legacy of the Rev. Dr. Martin Luther King Jr. and more important, they said, to fight that good fight here in Philadelphia and nationwide as the inauguration of President-elect Donald Trump approaches. Trump was not the choice of voters in Philadelphia and remains a controversial figure.

“We’ve come to resist,” the Rev. Mark Kelly Tyler of Mother Bethel said at a podium, his voice booming through loudspeakers down every street.

“In the city of Philadelphia, the city of brotherly love and sisterly love, we will resist anything that says, ‘Turn back the clock.’ ”

The Martin Luther King Jr. Day of Action, Resistance, and Empowerment March march to Mother Bethel began around 11 a.m. Monday at Sixth and Market Streets under the banner of reclaiming King’s legacy of “activism and resistance.”

The crowd was diverse, a mix of young and old gathered with varied interests and common causes, including Teamsters, members of the Philadelphia Federation of Teachers, Quakers, and Black Lives Matter. One man waved a silk dove high above the crowd on a long pole, and children tried to grab the streamers that fluttered down from its tail.

Participants wore painted capes and carried signs, some as simple as “Love Always Wins” with others that said “Trump Makes America Hate Again.”

“He’s supported by the KKK. People don’t seem to understand or care about that,” Greta Haebel, 50, said about her sign.

Kerry Durst of Queen Village brought her daughters Maya and Brynn in a double-wide baby stroller, and the sign that covered their laps touched on just about everything.

As the march moved south on Sixth Street, Asa Khalif, a Black Lives Matter leader in the city, stayed in the front, leading chants of “no justice, no peace, no racist police” with his bullhorn.

Khalif also called out Michael Grant, better known as “Philly Jesus,” accusing him of being a “homophobic bigot” when he tried to join the ranks at the front. Several marchers attempted to block Grant’s path, and he repeatedly told them to stop touching him before police got involved to clear a path for him.

Khalif was one of more than a dozen speakers who took the podium outside Mother Bethel, and nearly all of them had pointed remarks for Trump.

Councilwoman Helen Gym said it was hard to comprehend the sea change the country will see in the White House.

“Our values were not elected on November 8th,” Gym said.

On Monday morning, before the march, more than 1,000 people gathered in the Girard College armory to begin the nation’s largest Martin Luther King Day of Service event.

“You can be successful and you can accumulate and you can earn and you can have things, but unless you understand that changing someone’s life for the better is more important, you’re never going to find happiness,” Kenney said.

Trump was dubbed the “elephant in the gymnasium,” and speakers urged the crowd to ramp up its efforts in the coming years.

“This democracy is our democracy, and the reality is that we have to protect it, and we protect it with service,” said U.S. Rep. Dwight Evans (D., Phila.).

Out on the armory floor, volunteers were making dresses out of pillowcases for children in Haiti and Africa, mixing ready-made meals in plastic bags, and turning old stuffed animals into toys for shelter dogs and cats. Volunteers could send valentines to the elderly and thank-you letters to President Obama.

“We do it because we understand what service means,” said Jenavia Weaver, coordinator at the Community College of Philadelphia’s Student Leadership and Involvement Center. “If we could all do a little more service for others, the world would be a better place.”