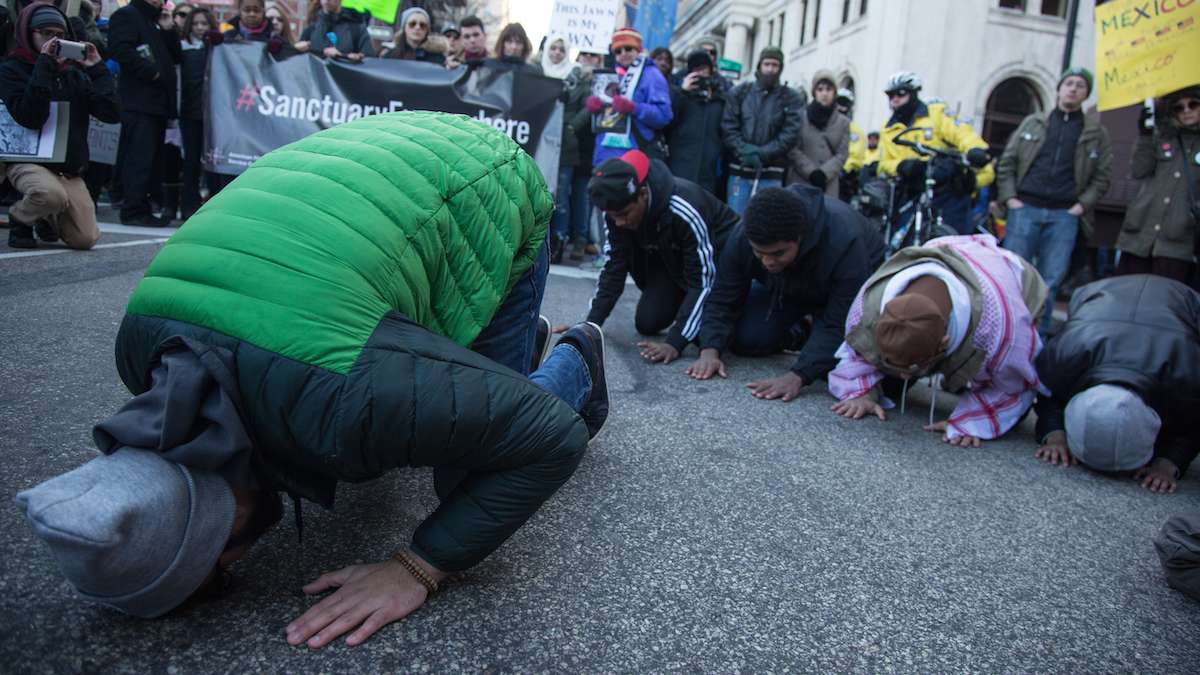 By POWER InterfaithFebruary 6, 2017No Comments

They brought children and dogs and hundreds of signs. Slogans included “It does not say RSVP on the Statue of Liberty,” “Fight ignorance, Not immigration” and “I like my cheesesteaks wiz wit equal rights and protections for all immigrants.”

Participants included everyone from locals to out-of-towners who just happened to be in the area for the event.

Trevor Reynolds came with his grown daughter Lexi. Reynolds has lived in Cherry Hill, New Jersey, for more than 35 years but is originally from Antigua in the Caribbean.

Reynolds and his daughter had signs that said, “Say no to bullying in the schoolhouse or the White House” and “America is Inclusion, Trump is Exclusion.”

He thought the ruling by a federal judge Friday that temporarily stops the travel and refugee ban is great for now.

“It’s great that the system works,” he said. “I just hope that it continues. I just hope it’s not a short lived stopgap measure. I hope it’s a long-term solution, and that people would really wake up and see that if you’re bullying Muslims, you’re bullying all of us. If you’re taking away the rights of whoever, then you are affecting every single American.”

Reynolds and his mother are both naturalized American citizens who were supposed to travel to Antigua last week.

“She’s completely scared of leaving the country,” he said of his mother. “I just think it shows it’s not just the people in the Middle East, but it’s every American here. We don’t know what to expect day to day. And people are running scared, and it’s not right and it shouldn’t be.”

Susan Phillips traveled from York, Pennsylvania with her husband, Bob, to attend the rally. Phillips wore the identifiable pink hat of the D.C. Women’s March and held a sign that said, “Save humanity from Trump’s insanity.”

Phillips attended the Washington, D.C. Women’s March with her daughter, Samantha Varneke, who was also at the March for Humanity.

Phillips was elated about the judge’s ruling that temporarily stopped the ban, allowing travel from Iraq, Iran, Libya, Sudan, Somalia, Syria and Yemen.

“I am just so glad we have courts because if we didn’t have courts and the people in charge were in charge of our Congress and the White House and everything else I would be terrified,” she said. “Thank God for the courts. And I’ve never been more happy that America has so many lawyers.”

After the rally, the estimated 3,000 protesters marched from the plaza down to Independence Mall and back. A second line brass band played music, and the crowd chanted things like: “No walls. No registry. No white supremacy,” “Hands too small to build the wall,” and “No hate. No fear. Refugees are welcome here.”

Protesters outside Vice President Mike Pence’s speech at Congress Hall joined the March for Humanity. The City of Brotherly Love has been a hotbed of protests lately. Last week, thousands protested the president’s appearance in Philadelphia, outside the GOP’s congressional retreat at Loew’s Hotel in Center City and the Philadelphia International Airport after the deportation and detention of immigrants arriving in the city.

Temple University freshman Thomas Davidenko originally created the event on Facebook under the pseudonym Thomas Paine after being angered by the executive order. Once thousands RSVPed, the 19-year-old was quickly overwhelmed. He reached out to local organizations and partnered with the American Friends Service Committee, a Quaker social justice organization headquartered in Philadelphia.

The organizers called for opposing the travel ban and for “Sanctuary Everywhere.”

“#SanctuaryEverywhere is the simple idea that everyday people can come together to keep each other safe,” said Kerry Kennedy, AFSC associate general secretary for international programs, in a press release. “This means welcoming refugees, working to stop deportations, standing up to Islamophobia and working to ensure that Black Lives Matter by interrupting anti-black violence.”