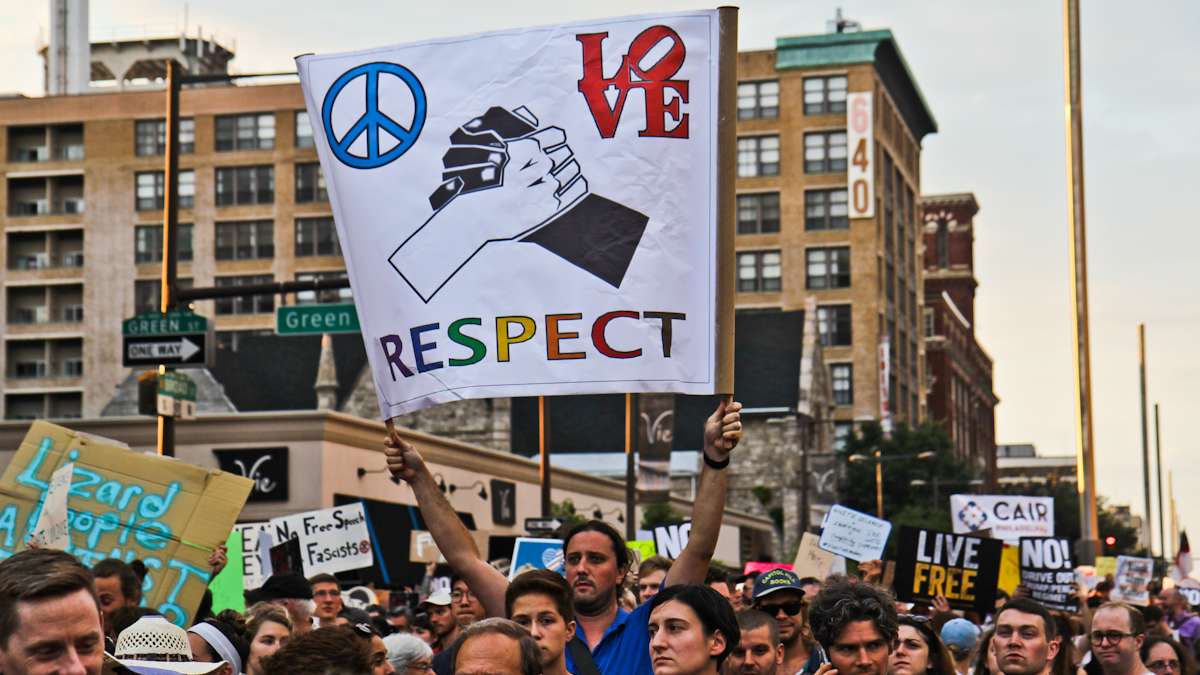 A protest against the rise of the white supremacy movement flooded Broad Street near Philadelphia City Hall Wednesday night.

The event was organized by POWER, an interfaith group, in response to the white supremacist and neo-Nazi rally in Charlottesville, Virginia on Saturday.

That rally turned deadly when James Alex Fields Jr., a 20-year-old Ohio man described as an admirer of Adolf Hitler and Nazi Germany, drove his car into a crowd of counter-protesters, according to police. A 32-year-old woman was killed and more than a dozen were hurt.

The event brought out people who had never protested before, like Jason Woolf of North Philadelphia.

“I just couldn’t sit by anymore and not do anything,” said Woolf. “I don’t know what I’m doing here but at least it’s something.”

The organizers connected the violence in Charlottesville to what they call “systems of white supremacy,” such as the criminal justice system, and public school funding that is unfair to non-white students.

“What happened in Charlottesville Virginia has happened to African people in this country for more than three hundred years,” said community organizer Asantewaa Nkrumah-Ture. “It’s nothing new. That type of racism and white supremacy takes place when you close our schools and our neighborhoods and you put more police in our schools that are left.”

She said protestors and supporters should also pay attention to issues like gentrification, raising the minimum wage and policing.

For instance, Nkrumah-Ture pointed to a case from 2015 in which a dozen mostly white Philadelphia police officers punched and kicked Tyree Carroll, a 24-year-old unarmed black man, while he was on the ground. An internal affairs investigation found no wrongdoing by the police, but a judge ruled earlier this year that Carroll was stopped illegally.

Quite a few protestors brought their young children with them, like Amy Emmett, who came with her seven-year-old son. She says she’s partly here for him, and that she hasn’t been this politically active since graduate school.

“In the last several years…I hid in my white privilege, in my economic privilege,” she said. “Activism with the possibility of confrontation has frightened me.”

But now Emmett said she cannot stay silent while others are hateful.

“There are so many organizations online: we’re signing petitions, we’re calling our representatives. It’s kind of wonderfully endless right now the ways you can plug in and be supportive,” she said.

While the rally ended peacefully at the Arch Street Methodist Church, a small group of demonstrators lingered near the Rizzo statue, which was guarded by rows of police officers behind barricades.

After some moments of tension as protestors taunted the officers, the group dispersed.

View tweets and images from rally