About 2,000 people, chanting denunciations of racism, fascism, President Trump, and former Mayor Frank L. Rizzo, marched down North Broad Street on Wednesday night in a rally aimed at showing solidarity with victims of the weekend confrontation in Charlottesville, Va.

The protesters also called for change at home.

“White supremacy is not relegated to the southern states,” the Rev. Mark Kelly Tyler of the interfaith clergy group POWER, which organized the event, said just before the marchers set off from Congregation Rodeph Shalom, 615 N. Broad.

“We felt the need not just to show sympathy with Charlottesville, but also to really put on display the manifestations of white supremacy in Philadelphia,” said the Rev. Gregory Holston, POWER’s executive director and pastor at Janes Memorial United Methodist Church.

“Where have you been?” a speaker asked the white marchers in the crowd. “Did you not listen to the cries of my people for the last 400 years?”

Attendees spoke of immigration and deportations, and of the death of David Jones, who was fatally shot in North Philadelphia by a Philadelphia police officer in June.

Along their half-mile “Philly Is Charlottesville” march to Arch Street United Methodist Church, speakers and marchers connected the violence in Charlottesville to Philadelphia, with a rabbi referencing recent local acts of anti-Semitism, including the desecration of a cemetery and a man who was arrested for urinating on a synagogue’s front door.

After a woman was killed when a man allegedly drove a car into a group of counterprotesters at the white nationalist rally in Charlottesville and after Trump said he believed “both sides” were to blame for the violence there, organizers said they felt compelled to march.

“It was disgusting, sad, upsetting, disturbing — like living 100 years ago,” said Meanda Hall, 34, a union leader and hotel housekeeper, of watching the events in Charlottesville unfold.

One protester’s sign read, “You’re either not okay with Nazis or you’re wrong.”

Another declared, “We must take sides! Never again!”

“I’m supposed to be here, as a school teacher and a human being,” said Shaun Pritchard, 39, of West Philadelphia.

Marchers also chanted about removing the statue of the controversial former mayor and police commissioner that stands at Thomas Paine Plaza outside the Municipal Services Building. In recent days, others have called for the statue’s removal, and a man from New Jersey egged the statue Wednesday morning. (Also, 15,000 people have signed an online petition to keep the statue in its place.) The statue was protected by three levels of fencing and a large police presence blocking access to the plaza.

A smaller group of protesters remained by the statue after the rally at the church. At times they were loud and boisterous. 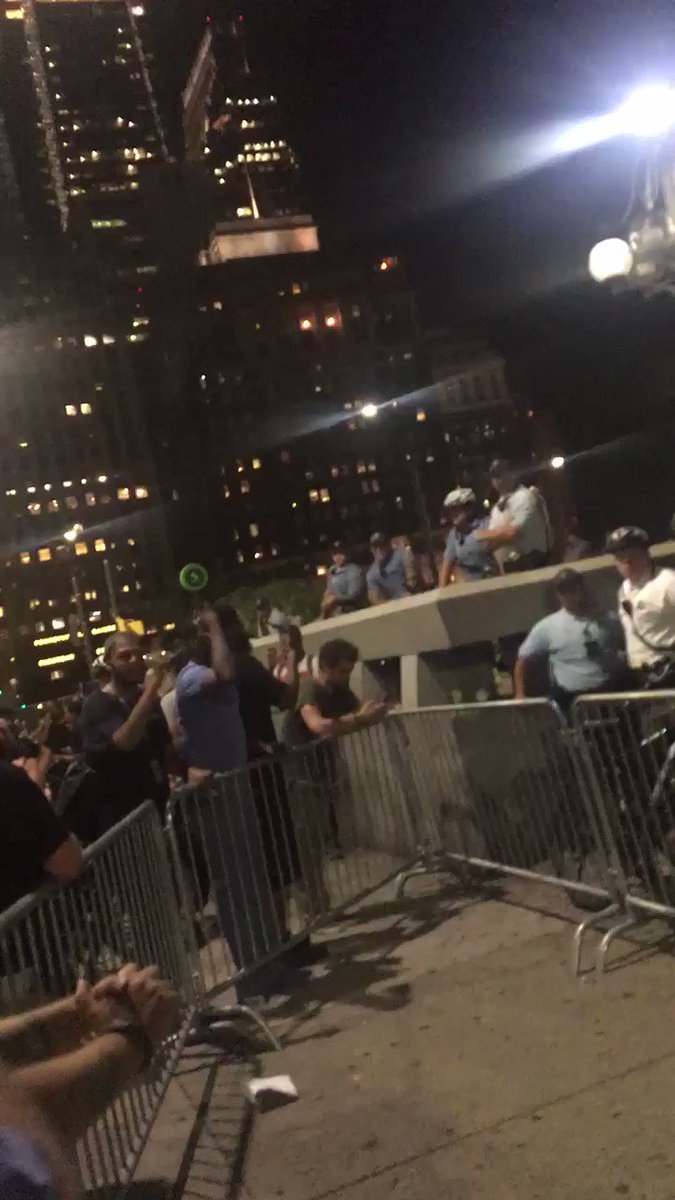 “The statue is going down one way or another,” said Asa Khalif of Pennsylvania’s Black Lives Matter chapter. “It stands for generational hurt, oppression, injustice, homophobia, anti-blackness.”

He said protesters would not attempt to remove the statue during the march, though, as he didn’t want to overshadow POWER’s moment.

Holston said he agreed with calls to bring down the statue.

“In my view it should never have been put up in the first place,” he said. “But we understand that the manifestation of white supremacy in our institutions has a much more devastating effect than whether a statue is there or not.” 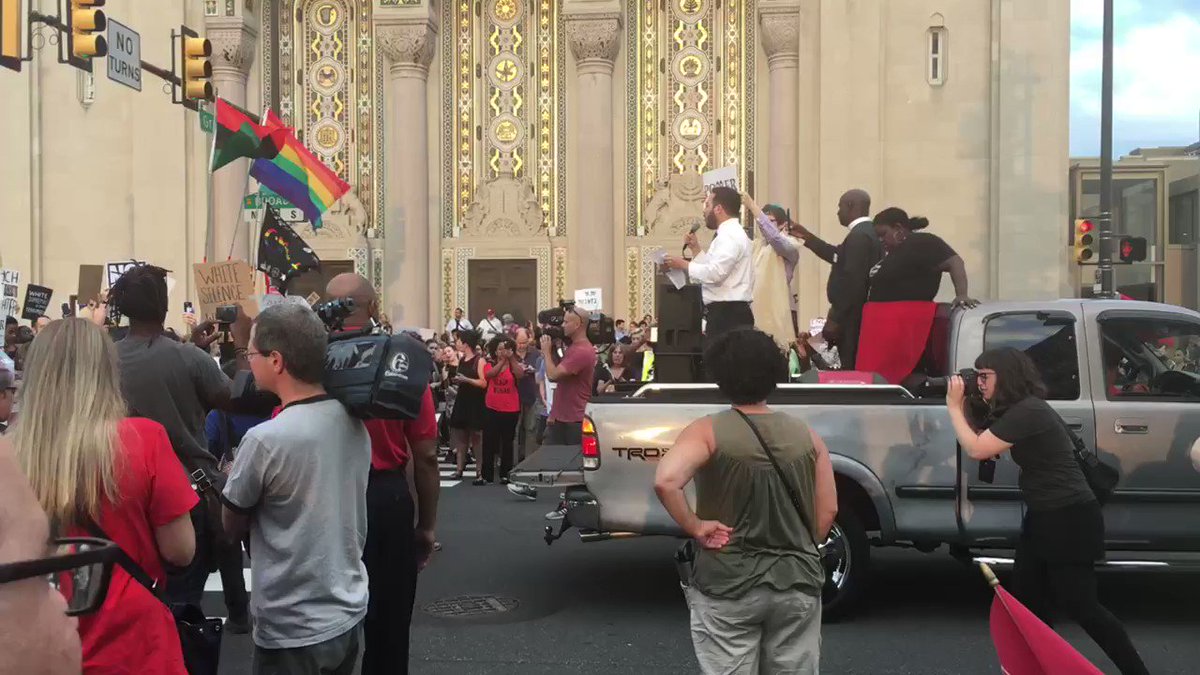 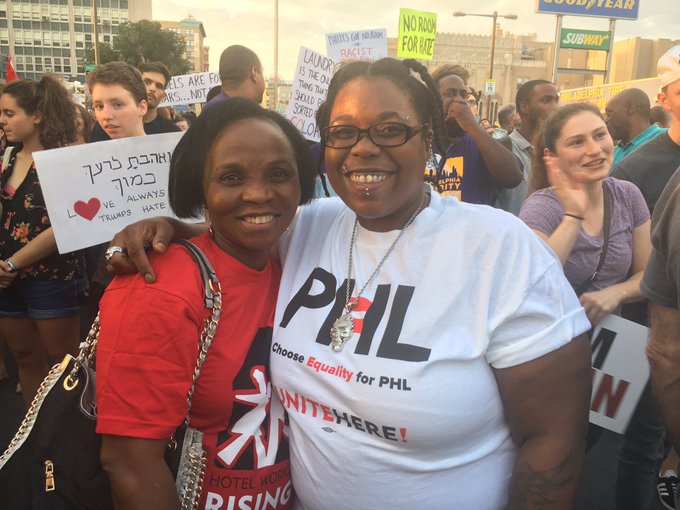 The march began shortly after 7 p.m. with chants of “Whose streets? Our streets!” 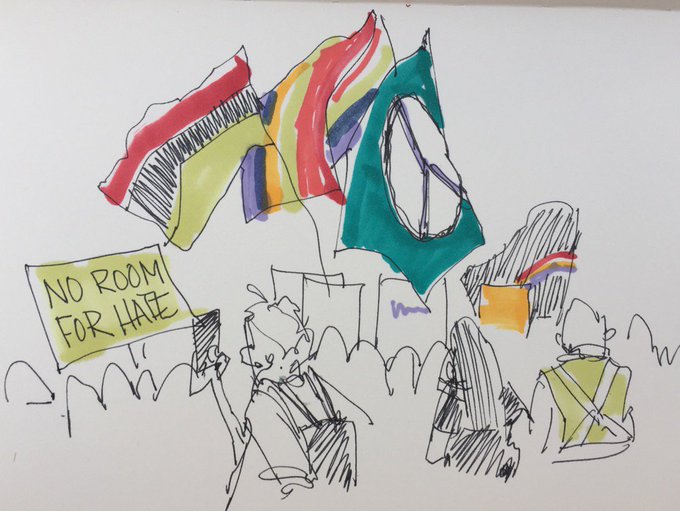 The mood was largely positive and upbeat, with only a brief confrontation with a lone counterprotester in a “feminism is cancer” shirt. 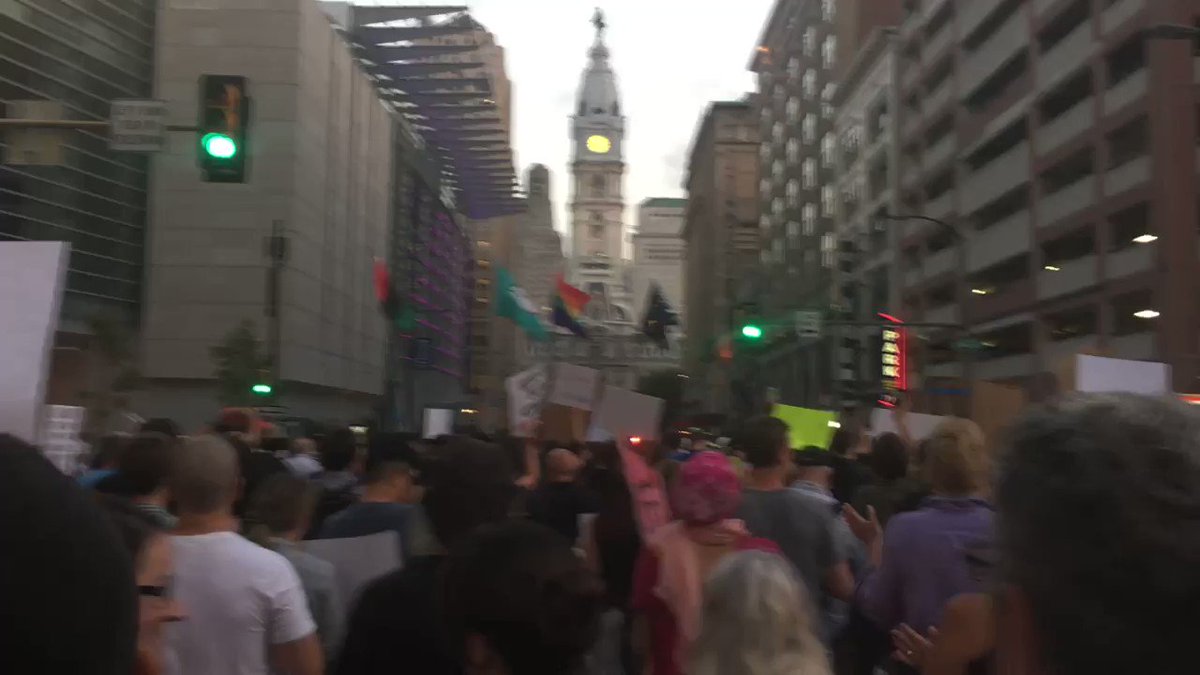 Organizers had outlined three goals for the march: They would highlight disparities in Pennsylvania’s school funding system, call on Mayor Kenney to end the Police Department’s stop-and-frisk policies and “fully fund” an independent policy advisory board, Holston said, and demand that Council President Darrell L. Clarke push a $15 living wage for the city’s contractors and subcontractors. Most of the city’s impoverished, Holston said, are people of color: “Anything we can do to raise wages helps dismantle white supremacy.”

He added: “We’re not saying any of these leaders practice white supremacy. But the institutions that they are the gatekeepers of practice it, and part of every politician’s work has to be dismantling all the remnants of white supremacy.”

Lauren Hitt, a spokeswoman for Kenney, said the administration has increased the Police Advisory Commission’s funding by nearly $150,000 and increased its paid staff by 50 percent.

“We look forward to seating the 13 new commissioners and our new executive director soon,” she said.

Kenney, she said, “also agrees that no person should be stopped by police because of the color of their skin. [Police Commissioner Richard Ross] has implemented several new reforms specific to ‘stop-and-frisk,’ including progressive discipline for officers. The reforms led to a 72 percent decrease in stops last year.” 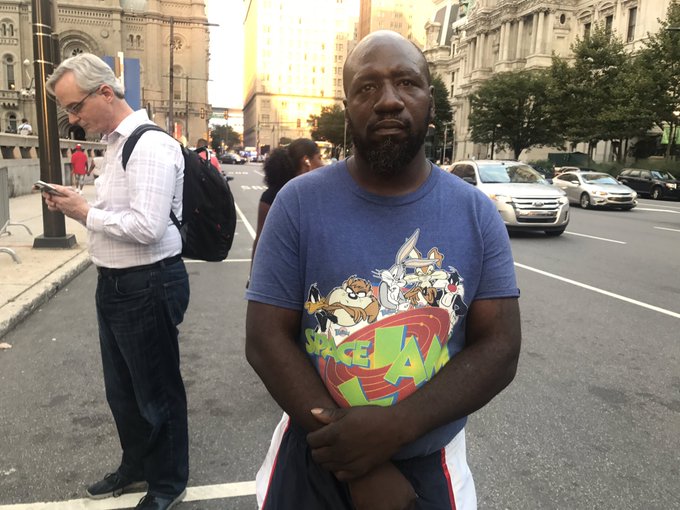 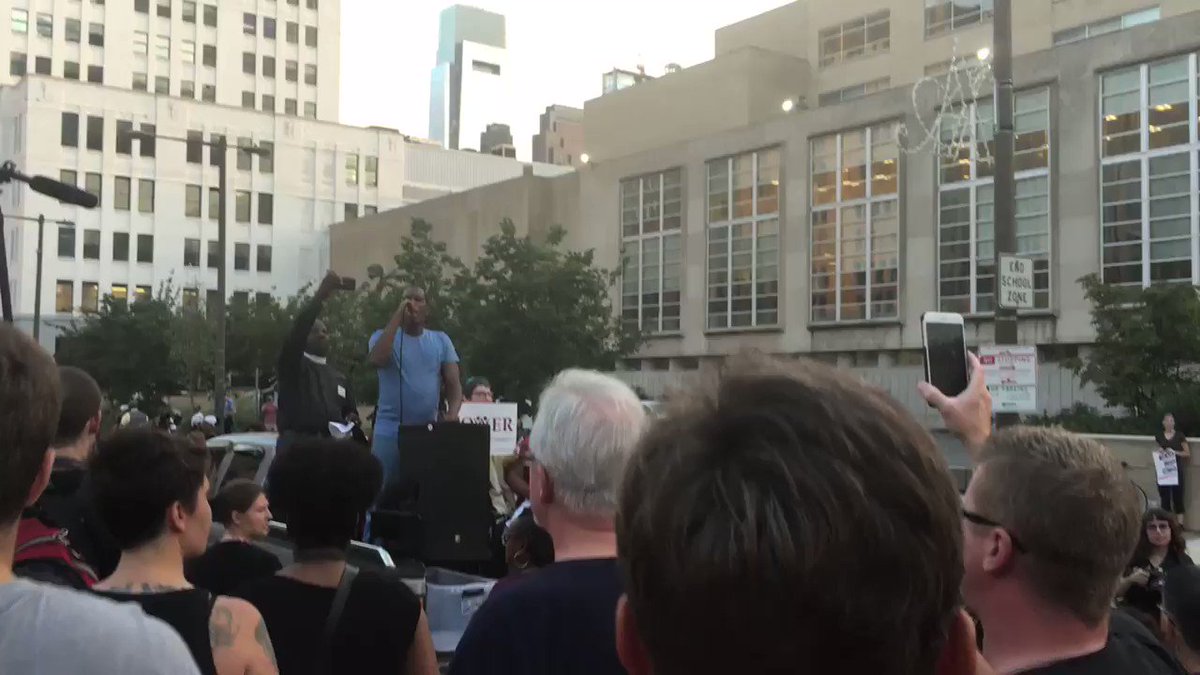 A heavy police presence, including Ross, was on hand. Larry Krasner, the Democratic candidate for district attorney, was among the marchers and advertised the rally on his campaign website.

“We have a president telling our country that Nazis are good people,” he said through a spokesperson. “Everybody should come out and march.”

Marchers said they, too, felt an obligation to come.

“What other choice do we have as American citizens?” asked a woman who asked that she be quoted only by her first name, Carla. As a child, she said, she and her family had emigrated from Chile; she became an American citizen five years ago. “I feel it’s my obligation to fight for the rights of others. It’s time to rise up.”