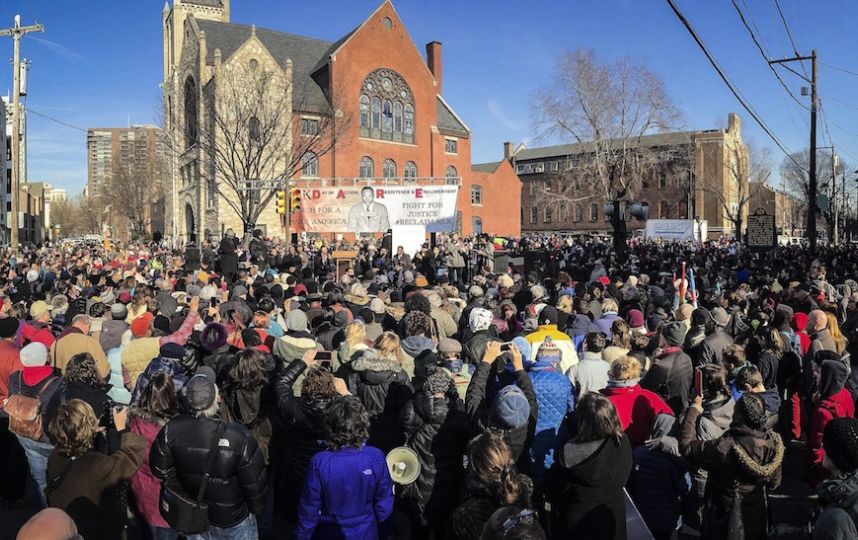 Thousands join march for a better America on MLK day

Martin Luther King Jr. Day was celebrated Monday in Philadelphia with volunteer projects, charitable activities and a renewed call for a “revolution of values” to honor the civil rights leader’s legacy.

One of the largest events in the city was a march organized by the Reclaim MLK coalition, which calls for King’s legacy to be honored through activism and uprising. With days to go before Donald Trump’s inauguration as president, the calls took on an increased urgency.

“In his own time, King called for a revolution of values in American society and spoke of ‘the fierce urgency of Now,’” said the Rev. Mark Tyler, senior pastor of Mother Bethel A.M.E. Church and lead organizer of the march. “Today, as we face many of the same problems, but also greater challenges that have put our most basic democratic institutions under attack, we reiterate his call to organize, to take to the streets, and to fight for a nation all of us.”

An estimated 2,500 people attended the “March for a Better America,” which began at the President’s House slave quarters at Independence Mall and concluded with a rally at Mother Bethel A.M.E. Church.

The MLK Day of Action, Resistance, and Empowerment (DARE) Coalition, which organized these events, also released a statement of values asserting “all Americans’ civil and human rights.”

These included the right to “shared prosperity,” including “full employment, a living wage, a guaranteed income, pay equity for women and hunger-free communities;” as well as the right to be free from all forms of racism, including “intentional, unintentional, implicit, explicit, institutional, personal, disparate treatment and disparate impact;” and “the right to care for our common home, Earth.”

The Rev. Gregory Holston, executive director of Philadelphians Organized to Witness, Empower, and Rebuild (POWER.), urged attendees to not despair about the current situation, but to reject “the cynical politics of inequality and exclusion, of hate and division.”

A general mood of resistance to the incoming president was evident during the march.

As City Councilwoman at Large Helen Gym put it, “Philadelphia and cities like it, energized by the power of the movements for racial, economic, and environmental justice that are sweeping the nation, are building the path forward. We are creating the moral agenda for our time.”