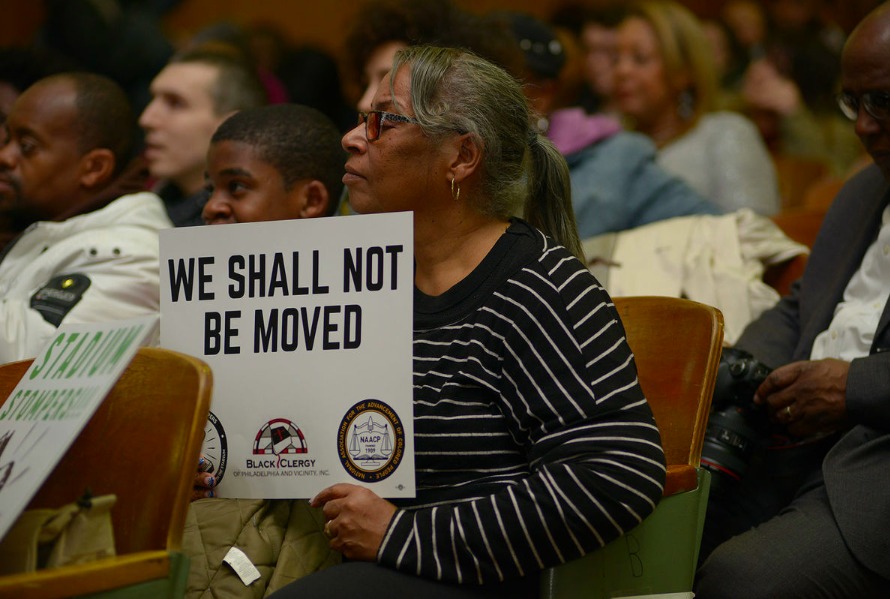 By POWER InterfaithMarch 5, 2018No Comments

Nearly 400 people packed in the Carver Engineering and Sciences High School on Thursday evening, declaring “We will not move,” in opposition to Temple University’s proposed football stadium around 15th and Norris streets.

The meeting was organized by the Stadium Stompers as a response to Temple’s January announcement that they are taking “the next step” to build the stadium.

“We’ve been begging [city council] to do a community meeting since May 5, 2016. We went on record to ask [City Council President] Darrell Clarke to host a community meeting here, he has failed to do that,” said Stadium Stomper steering committee member Ruth Birchett.

“We need representation on this issue and our councilperson, our senators and our state reps should not let Temple disrespect this neighborhood in this manner. You don’t place a massive $140 million project without asking the community what they think. It’s the legacy of our community that’s been dwindling over the decades and this is a nail in the coffin.”

Birchett and others characterized Temple’s proposal as colonization that will push Black people out of the neighborhood.

“There’s something wrong with that. Whenever they start to try to pour money in the community, you better believe they don’t want any Black folks around. if you don’t understand that race is dug deep in this thing, that race is a factor in this thing, that all of the stadium stuff is about removing some Black folks from North Philly and [attracting] some people with some money with a lighter hue down to live here, then you got the whole situation wrong.”

Holston said that they should rethink their elected officials who do not support their movement.

“You need to make it your prerogative to tell that council he better do what you tell him to do…and say no … to a stadium.” Holston continued that if the elected officials go against their wishes, the community should “vote them out.” Holston then led the audience in chanting “Vote them out!” toward the closing of the meeting.

Marsha E. Thrower, a resident of the Diamond Park apartments on 15th street, which houses people living with disabilities, and seniors, was one of the people from the community who spoke at the meeting. She said she and more than 20 others would be displaced by the building of the stadium because the proposed location is “directly across the street” from the apartments.

“It would have to be totally closed. We would be forced to go elsewhere,” she said. “I’m very unhappy because I thought I was going to live there the rest of my life in comfort. They don’t give a (sic).”

Temple’s Faculty Senate is also against the stadium. Senate member Mary Stricker stated that the body “passed a resolution opposing” it. “Temple faculty say no to this, unequivocally,” she said.

Giving brief remarks at the meeting, NAACP President Rodney Muhammad advised that unity would be the key for the Stompers and their supporters to be effective.

“The NAACP is standing with them. We are not going to let [anybody] break us up. It’s too much of that already,” Muhammad said.

“We shall not be moved — that’s the first command we have. After that, we got to come up with our plan and put something in our neighborhood we know we are going to need, so they know we mean business.”

Temple University Director of Strategic Marketing and Communications Brandon Lausch shared that an informational meeting will be held at Mitten Hall, 1913 Broad St., on Tuesday at 6:30 p.m for the public.