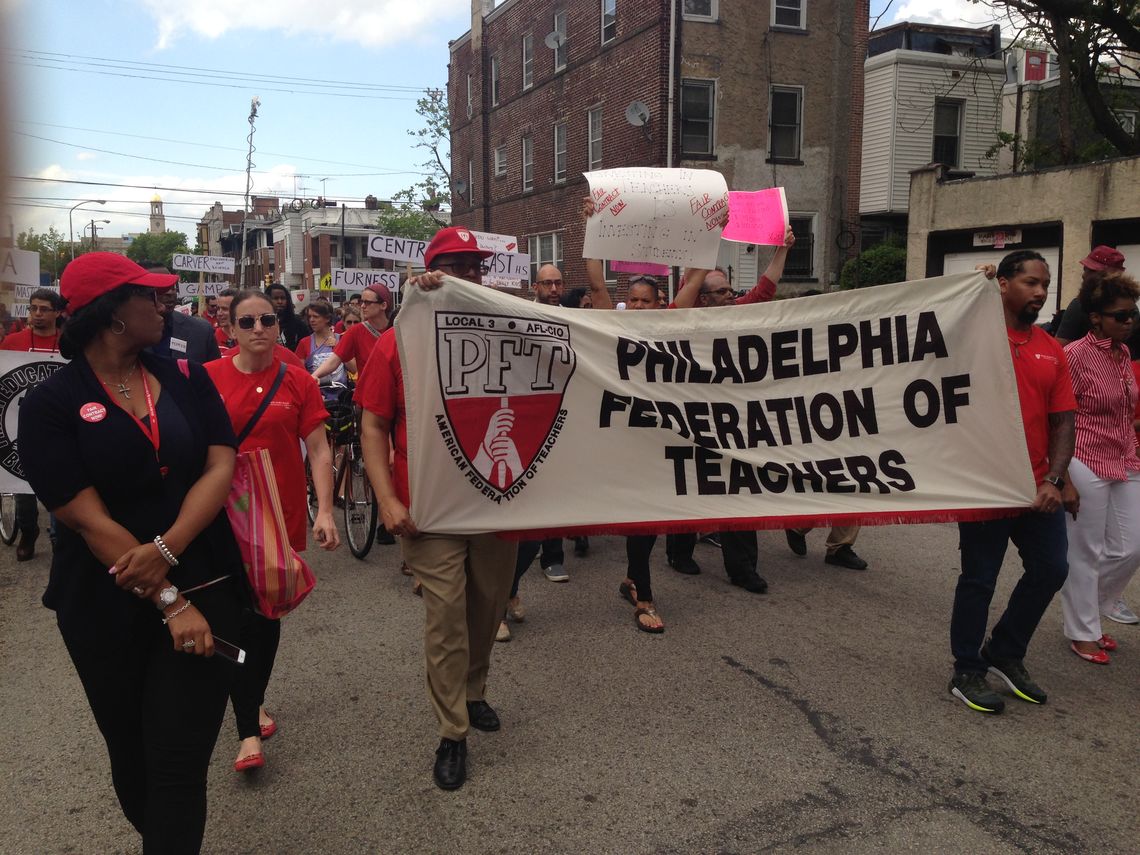 Teachers rally over ‘longest fight in the history of the PFT’

By POWER InterfaithMay 2, 2017No Comments

BY: by GREG WINDLE

Drums rolled as members of the Philadelphia Federation of Teachers rallied outside Lea Elementary school in west Philadelphia to protest their 1,339 days without a contract and to honor six teachers who are leaving the District because of years of frozen wages.

“This fight for a contract has been the longest fight in the history of the PFT,” said union President Jerry Jordan as he addressed the crowd.

“The [School Reform Commission] finds money for what it wants to spend money on,” Jordan said. “It’s our job to educate these children, but the SRC’s job is to provide fair working conditions and fair salaries.”

Jim Roebuck, minority chairman of the House Education Committee, spoke about his wife, who was a music teacher.

“I know how committed she was, how hard she worked, and how much money she took out of her own pocket,” Roebuck said. “I am fully committed to support you in any way I can… let me know what you need me to do, and I will do it.”

The crowd of teachers exploded in cheers.

Before introducing the six teachers who are leaving the District, Jordan asked the crowd to honor the many teachers who called his office, saying they wanted to be there, but couldn’t come because they were scheduled to work at their second jobs, and couldn’t afford to lose the income.

“I have worked seven days a week during the last eight and a half school years to make ends meet and pay off the student loans that I have from undergraduate and graduate school,” said Emily Cashin, a Spanish teacher at Carver in her 11th year with the District, who works a second job waiting tables on weekends.

“Three thousand is the number of dollars I was offered as a bonus to teach Spanish. I was never informed when it was canceled,” she said.

“I am tired of being looked down as not deserving the basic rights of a professional,” Cashin said. “This fall I will not return to teaching… today we defend our profession.”

She urged that if no contract is approved this year, all teachers should start working “to the letter of the contract,” meaning they would refuse to work any hour that they are not compensated for because of the lack of a contract.

Clint Kanopka, an eight-year physics teacher at Palumbo whose record of perfect attendance made headlines, said he is tired of the disrespect shown him after the work he’s done bringing in “hundreds of thousands in grants” for the school. He used much of the grant money founding the school’s robotics team.

The lack of a contract was his reason for feeling disrespected, and ultimately leaving his job.

“This year I’m making $15,000 less than I ought to be — about $40,000 throughout the freeze,” Kanopka said. “The District, by not offering a fair contract, is overtly signaling that they do not value talent.”

“Without strong public schools this city is doomed,” Kanopka said. “We must overpower and overcome because without resistance, without us, there is no hope for this city.”

The crowd erupted after his closing line.

“I want to start a family,” said Meghan Donnelly, and eight-year teacher now at Palumbo, adding that she can’t do so without the ability to plan her financial future, which is impossible without a contract. “Every year for five years our bills have gone up but our salaries have stayed the same.”

“A teacher’s working conditions are a child’s learning conditions,” she said. “High teacher turnover hurts our schools, especially the most vulnerable.”

By the time she was done, she was choking up. “Half of my heart is staying in Philadelphia,” she said.

“I don’t know how they survive,” said Ronald Morris, a veteran teacher of 25 years with the District, as he looked at the younger teachers standing next to him on the steps of the brick elementary school. “I’m tired. I’m feeling totally unappreciated. I’m feeling disrespected.”

He said he would have kept teaching for years, but instead retirement’s coming earlier than expected.

Bryan Steinberg, a teacher at Rush in his eighth year with the District, said he loves his school so much, and he would like to come back to teaching, but he’ll only consider it if Philadelphia’s teachers have a contract.

Steinberg had a message for SRC Commissioner Bill Green, who he said always talks about the need for teachers to sacrifice.

“But he was texting on his phone while students and teachers were testifying” at the SRC meeting last Thursday, Steinberg said. “And then he left three hours early. I can’t deal with that kind of hypocrisy.”

Steinberg said he earns $54,000, and under the terms of the old contract he would be entitled $68,000 for his step raises and a degree he’s earned on the job. He’ll be getting his real estate license this summer, and plans to reapply for a teaching jobs if the District has given the union a fair contract.

“You are valuable and you have worth,” said Reverend Gregory Holston — director of the interfaith advocacy group POWER, who was himself a teacher at Audenreid and whose wife is in her 25th year teaching at Central.

He said that POWER’s research has found school districts “of color” across Pennsylvania get, on average, $2,000 less per pupil than mostly white districts.

“Don’t be guilted into doing what you don’t have to do,” he told the crowd before announcing he was leading activists to lobby in Harrisburg for more money for the city’s schools on June 21. “It’s our fight. It’s a black fight — it’s a white fight — it’s a city of Philadelphia fight!”

The crowd stood cheering, shouting, and hugging each other before joining together and marching down 47th Street toward Clark Park.

A street-wide banner carried by a half-dozen teachers at the front read Philadelphia Federation of Teachers. Countless white signs with black letters poked out of the crowd with the names of teachers’ schools written across them: KCAPA, Furness, Central, Workshop School, Northeast, Carver, Mifflin, Masterman, GAMP — displaying their pride in their schools.