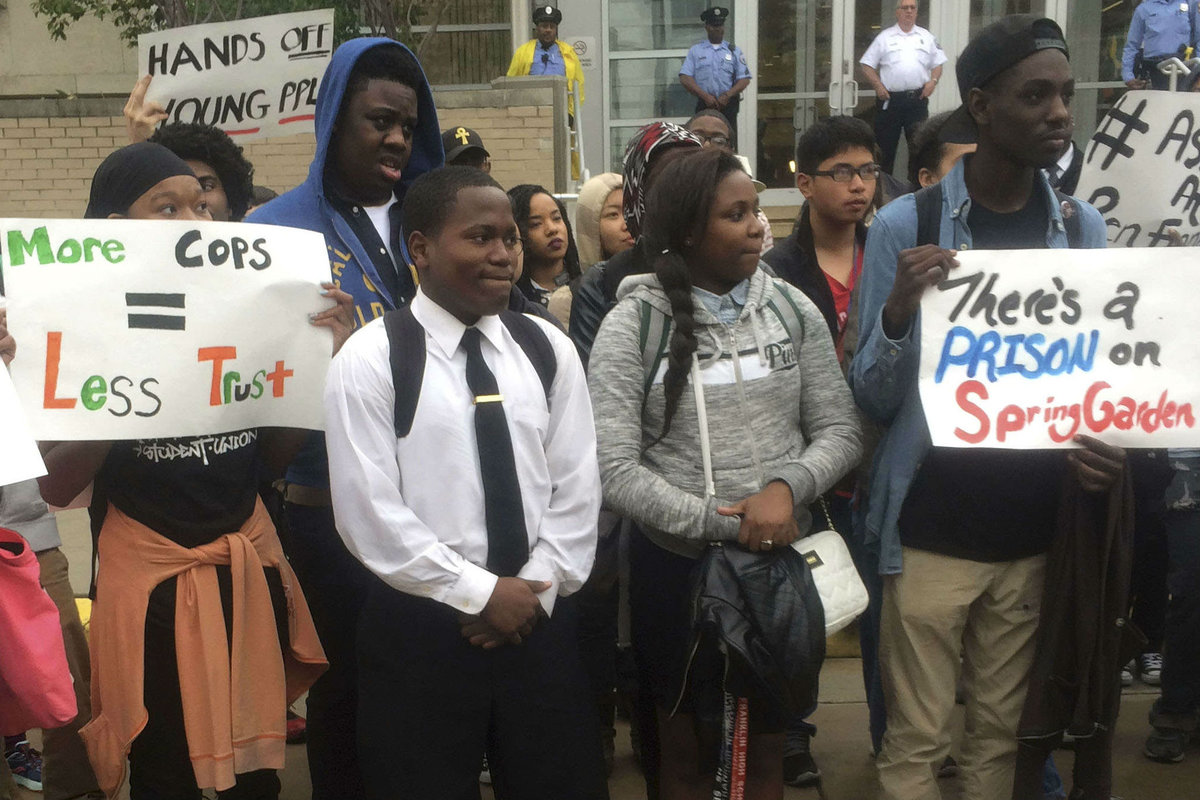 By POWER InterfaithMay 18, 2016No Comments

IT ALL STARTED when Brian Burney said he was going to use the bathroom at Benjamin Franklin High School, and Jeffrey Maciocha asked if he had a hall pass.

Moments later, the 11th-grader was on the ground after arguing with the police officer.

“I threw an orange at the wall out of frustration,” Burney said. “He punched me in my face, and put me down to the ground, and then put me in a choke hold.”

Burney made his comments after a 45-minute protest outside the Philadelphia School District administration building Tuesday afternoon. Several community organizations took part, arguing that the alleged assault on May 5 was unjust and that the district spends too much on school policing.

Chants of “No justice! No peace! No more school police!” rang out several times among the 50 to 60 people who gathered in the rain.

Raven Hill, a School District spokeswoman, said that as of Tuesday, there were no updates on the incident. Last week, district officials said Burney was restrained by Maciocha, but not in a choke hold, after cursing at him and calling him names as well as throwing the orange.

One of the speakers at the protest was Councilwoman Helen Gym. “City Council is deeply concerned about this issue,” Gym said afterward. “If there’s any situation in which potential excessive and unnecessary force is being used against students, we have an explicit policy that that’s not going to be tolerated in any way.”

During her speech, Gym said she and five other Council members had signed a letter asking School Reform Commission Chair Marjorie Neff and Superintendent William R. Hite Jr. to investigate the alleged assault.

They also want the district to disclose its standards and procedures for school police officers, and create a complaint system so students and parents can raise concerns about security-staff issues.

Jerry Jordan, president of the Philadelphia Federation of Teachers, said the district must be accountable for what happened.

“All students deserve to be treated with dignity,” he said repeatedly.

The Rev. Leslie Callahan, a pastor at St. Paul’s Baptist Church and member of POWER (Philadelphians Organized to Witness Empower and Rebuild), said there are inconsistencies in how police officers treat students in schools throughout the district.