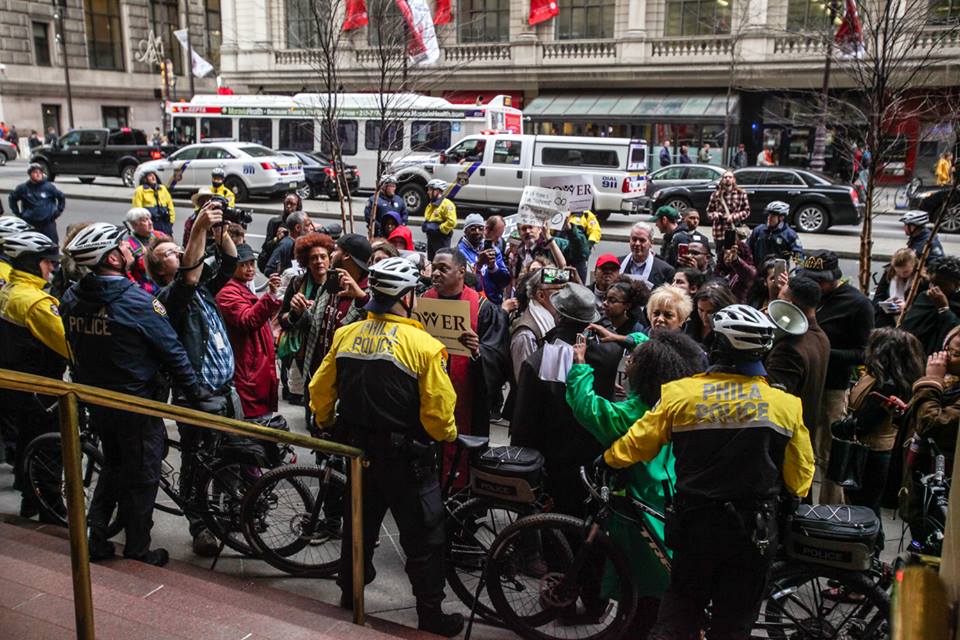 PHILADELPHIA –  The Center City Starbucks manager who called police, leading to the controversial arrest of two black men, is no longer an employee at the store, a company spokesperson confirms.

Starbucks CEO Kevin Johnson says the company is reviewing the arrest of two black men in a Philadelphia store last week and expects to train store managers on “unconscious bias.”

Johnson, who met with Mayor Jim Kenney and Police Commissioner Richard Ross on Monday, said he hopes to meet the two men who were arrested in the next couple of days. He says he’s like to have a dialogue with them and listen with “compassion and empathy” about what they went through.

“We’re looking at all aspects to ensure that this never happens again,” Johnson said Monday.

Asked if the incident was a case of racism, he responded: “Starbucks was built around the concept of a third place where we create a warm and welcoming environment for all customers. What I do know is that did not happen in this instance. And that is what we’re focused on.”

“I believe Starbucks will cooperate fully with our probes of the matter, particularly the Philadelphia Commission on Human Relations’ review of Starbucks’ policies. All parties agree that the outcome of this incident was extremely unfortunate and that’s why we are reviewing the incident seriously. This is not just a Starbucks issue. This is a societal issue. People can react differently to others based on skin color, and that is wrong.  We have work to do, and we need to do so productively.”

City Councilman Kenyatta Johnson, members of the Urban League and the NAACP talked to reporters after meeting with Starbucks officials.

Meanwhile, activists took over the shop Monday to protest the arrests.

“We don’t want this Starbucks to make any money today. That’s our goal,” said Abdul-Aliy Muhammad, one of the protest’s organizers and co-founder of the Black and Brown Workers Collective.

Members of the Urban League and the NAACP were present Monday. They were in attendance to demand justice and equality from Starbucks.

A small number of people in the crowd were yelling out questions about how the police handled the arrest of the two men. Some people yelled out against Police Commissioner Ross and his initial comments concerning the officers, specifically that the officers did what they were supposed to do.

Members of POWER, a group of interfaith clergy leaders marched in during the press conference with the NAACP, chanting, forcing city leaders to explain they are in agreement with the protesters. Most of the protesters are not satisfied with how Starbucks has responded.

“This is not an isolated case. That to think this only happens at this one Starbucks and that if we fix this one, the problem goes away misses the point,” Pastor Mark Tyler, of POWER Interfaith, said.

“It uses gentrification so much in the building of its buildings. It’s implicit in pushing people of color out of our communities and our city,” Reverend Gregory Holston, of POWER Interfaith, said.

Starbucks regional vice president Camille Hymes attempted to talk to the protesters, but was shouted down.

Officials have said police officers were told the men had asked to use the store’s restroom but were denied because they hadn’t bought anything and they refused to leave.

Police haven’t released the names of the men who were arrested and later released after the district attorney’s office said there was lack of evidence that a crime had been committed.