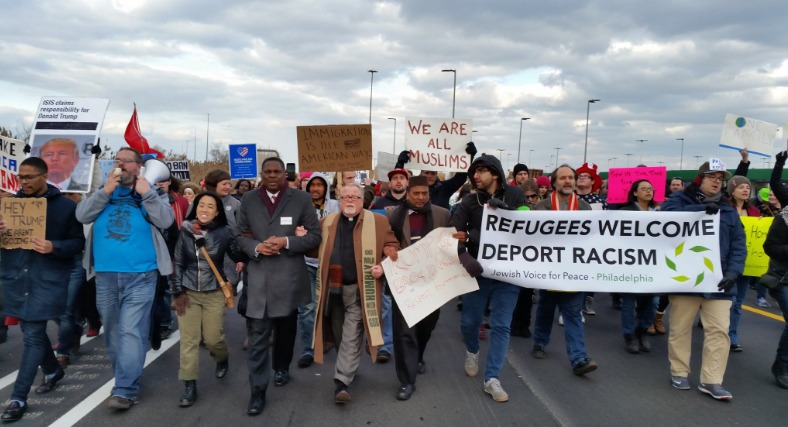 By POWER InterfaithJanuary 30, 2017No Comments

Another protest took place at Philadelphia International Airport, the second in as many days, after travelers arriving from nations subject to President Donald Trump’s travel ban were detained and returned.

Protesters like Ellen Bedenko rallied against President Donald Trump’s executive order temporarily banning travelers from seven majority Muslim nations including Syrian refugees.
Sunday’s protest was the city’s largest since the order was signed Friday.
Among those gathered were the family members of the Syrian Christians detained at PHL Saturday morning.
The 6 people–two brothers, their wives and children– were sent back to Syria by federal authorities complying with the ban. Loved ones said they were legal visa holders immigrating to the US.
By Sunday evening the larger outdoor protest had given way to a small group of protesters inside the terminal flanked by Philadelphia police officers.
Police said one person was arrested, cited, and released in the protest.
Below is a shot from Sunday afternoon and evening, when protesters waved signs, and chanted “Let them in!” and other slogans.

Friday, many flights to the U.S. already were in the air Friday when the president’s order barred entry to citizens of seven predominantly Muslim nations.

Saturday, demonstrators and lawmakers gathered at PHL, demanding the release of the people who’d been detained.

Later that night, a federal judge in New York issued an emergency order temporarily barring the U.S. from deporting people who arrived with valid visas or an approved refugee application. But Trump’s immigration ban caused chaos earlier in the day.

Lawyers and advocates said they didn’t have a hard count on the number of people taken into custody after getting off their flights.

But Sunday morning, the American Civil Liberties Union reported their team of lawyers “received assurance from the U.S. Attorney’s office for the Eastern District of Pennsylvania that everyone detained at the Philadelphia airport under that order on Saturday will be admitted to the United States and released from custody on Sunday.”

Also, “Two people have already been released and are en route to their domestic destinations.”

“As the chief legal officers for over 130 million Americans and foreign residents of our states, we condemn President Trump’s unconstitutional, un-American and unlawful Executive Order and will work together to ensure the federal government obeys the Constitution, respects our history as a nation of immigrants, and does not unlawfully target anyone because of their national origin or faith.

“Religious liberty has been, and always will be, a bedrock principle of our country and no president can change that truth.

“Yesterday, multiple federal courts ordered a stay of the Administration’s dangerous Executive Order. We applaud those decisions and will use all of the tools of our offices to fight this unconstitutional order and preserve our nation’s national security and core values.

“We are confident that the Executive Order will ultimately be struck down by the courts. In the meantime, we are committed to working to ensure that as few people as possible suffer from the chaotic situation that it has created.”

“I am so grateful to all those who worked to see these two new Americans released and reunited with their families, namely the ACLU, the International Refugee Assistance Project, volunteer lawyers, the Philadelphians who demonstrated peacefully last night, Sen. Casey, Gov. Wolf, Congressman Brady, Congressman Evans, State Rep. Brian Sims, State Rep. Jordan Harris and Councilwoman Helen Gym. I also thank our other congressional colleagues Rep. Brendan Boyle, Rep. Charlie Dent and Rep. Brian Fitzpatrick for their vocal opposition to this unconstitutional order. While we will have to continue to work to see this order completely defeated, this is an important victory against hate.

“We’re proud to announce that in addition to the release of anyone detained at the airport yesterday afternoon, all new passengers arriving today will be treated the same as they would have been prior to the executive order.”

Sunday’s protest in support of refugees and other immigrants was held at 2pm at PHL’s Terminal A West.

Saturday, relatives said two families were denied entry to the United States upon arrival at Philadelphia International Airport on Saturday and returned to Qatar.

Sarwad Assali of Allentown told FOX 29 News she had cooked for her family members who were turned away at PHL on Saturday morning.

The family, Syrian Christians with legal immigration visas, was sent back hours after landing on U.S. soil.

The Assalis immigrated to the U.S. decades ago and built a happy life in Allentown. It’s the same American dream they wanted to share with Ghassan Assali’s two brothers, their wives and two children.

Ghassan was already at the airport, waiting to reunite with his family and bring them to the home he bought to get them on their feet.

But he said he was blindsided when federal officials him his brothers would be sent back almost immediately. He says the family is Christian and went through years of legal immigration proceedings before getting valid visas.

Trump said the goal of the temporary travel restriction was to keep out potential terrorists.