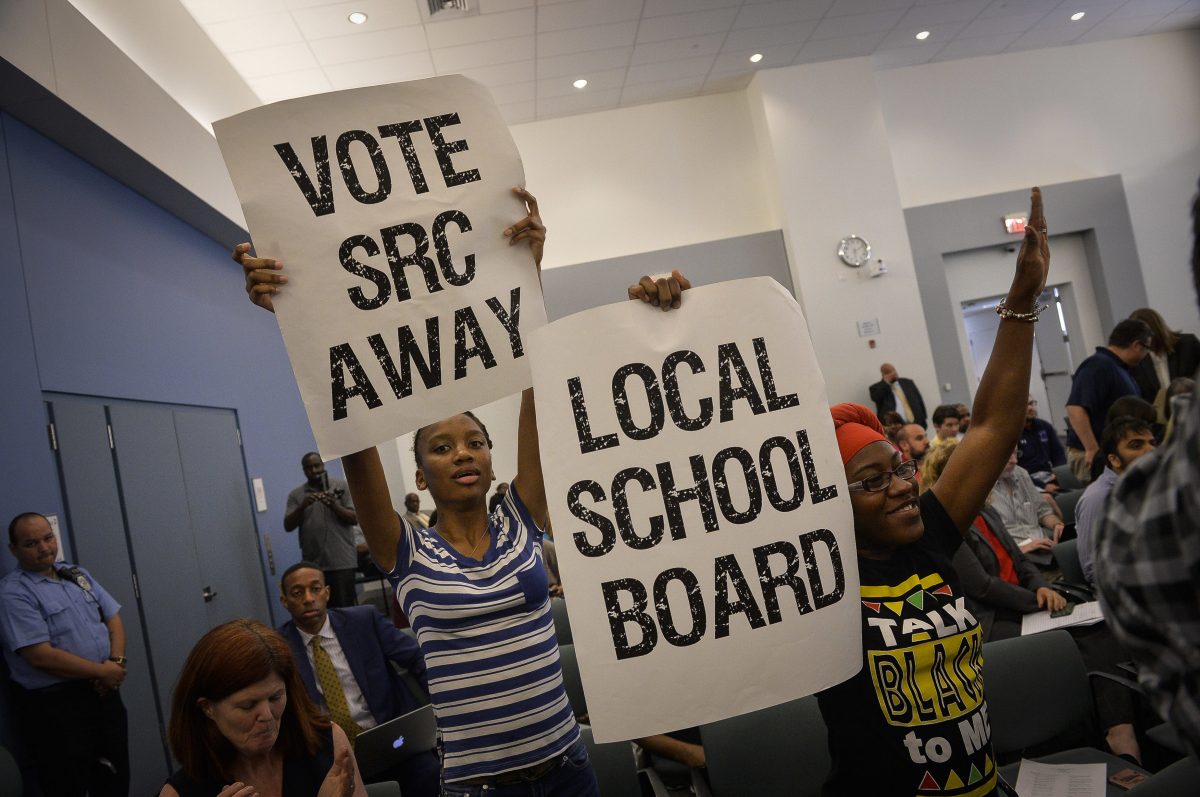 Rally outside District headquarters declares victory with end of SRC

The crowd spilled over the steps of District headquarters and out into the parking lots as Randi Weingarten, president of the American Federation of Teachers, joined Jerry Jordan onstage at a rally celebrating the end of the School Reform Commission, the governing body created in 2001 when the state took over control of Philadelphia schools. They were joined by a cadre of politicians, and activists from an array of groups that have jointly formed the Our City Our Schools coalition.

“The SRC brought us the privatization of our schools,” said Jordan, president of the Philadelphia Federation of Teachers. But, he said, it never solved the District’s financial problems, as the state had claimed it would. “It brought us Christmas Eve layoffs for 50 nurses.”

Weingarten said, “Each and every day we are on a journey for justice for children and democratic control of our schools.

“We stayed together and we fought together! Using collective bargaining for the common good.”

This is only the start, Weingarten said, pointing past the crowd to District headquarters, where the SRC sat in session, getting ready to cast the vote that would decide its fate. “With local control back, we’ll do everything in our power to make sure kids succeed!”

Weingarten was drowned out when the crowd sang the same song as they had when Jordan spoke.

Now the president of the Pennsylvania branch of the American Federation of Teachers, Ted Kirsch led the PFT when the state took over the District and established the School Reform Commission.

Kirsch complimented a Notebook article published that day explaining the SRC’s history, including the role of Act 46, the legislation that allowed for a state takeover of the Philadelphia schools.

“Act 46 was a direct attack on the PFT, and on you, and on the children of Philadelphia!” Kirsch said.

Kendra Brooks represented Parents United and has been organizing in her North Philadelphia neighborhood for a decade.

“The SRC was designed to destroy public education,” Brooks said, looking over the crowd toward the building where the commission was deliberating. “Say what you want about Philly, but we fight to the end!”

Brooks said the Our City Our Schools coalition is creating a “platform,” or proposal, for a new school board called a “People’s School Board.”

A statement by the coalition said it would have three key criteria:

“A board made up of true stakeholders of Philadelphia’s schools, a board that ends the conflicts of interest that have plagued the last 16 years of school governance and a board that’s ready to fight for true racial and economic justice in our schools.”

The statement does not describe the board as either elected or appointed. The new board will be appointed by the mayor.

But before the rally, Brooks said that, personally, she would like to eventually have “a fully elected board.” Yet she still prefers the new board appointed by the mayor to the SRC.

“I’m excited to see how the new board is going to move forward,” Brooks said. “I’m happy the mayor made this decision, and now we’ve got to hold him accountable.”

The SRC, she said, hasn’t been accountable to anyone. “At least with the mayor, we have a democratic process to hold him accountable.”

She said she had been concerned about the SRC since the beginning, but she wasn’t active until it started closing schools, affecting her family directly.

The Rev. Gregory Holston, founder of POWER — an interfaith activist organization that is part of the coalition —gave a passionate speech that left the crowd cheering.

“Teachers did it. Parents did it. Children out here protesting did!” Holston said. “We had to end the SRC because they were sucking the money out of this District!

“Celebrate together knowing that you have achieved what they said was impossible. There is nothing that can be denied us, because we are the people and the people have the power!”

Holston ended by sounding a familiar note: There is still more work to be done.

“I’m still called by that 4th grader in the northwest of this city with asbestos in their school. She doesn’t have the teachers or the counselors to support her,” Holston said, and the crowd was silent. “I hear her crying out every night … until we can say to her that your school is as good as any other school in the suburbs or the white part of town.”

Helen Gym, the city councilwoman elected in 2015 on a platform opposing the SRC, smiled as she waited to speak. As others had, she pointed at the gray building behind the crowd when she spoke.

“We stood up and wept when they closed our public schools. … We did weep, but then we got right back up and we organized!” Gym said, turning her gaze down to the crowd and spreading her arms. “You put in a City Council and a mayor and a new vision for this city to prioritize public education and our children.

“Don’t forget this grassroots movement. Get in the political game. Don’t give up. We’ve got work to do!”

“I know in the suburbs that they’re spending 10,000 more per child,” Hughes said. “Brothers and sisters, that is the fight we’ve got to win.

“That is why we celebrate, so we can build ourselves up for the ultimate fight!”

Antione Little, chair of the Our City Our Schools coalition, released the following statement describing the coalition’s plans:

“Today is a huge step forward for the Philadelphia schools — and a victory for the thousands of parents, students, educators and school staff who have been fighting for true education justice for the past 16 years of the School Reform Commission. The Our City Our Schools coalition is proud to have played a role in making sure state control of our schools ended this year and no later.

“What comes next has the potential to redefine how our schools are run — but only if we make true steps towards a People’s School Board that can undo the damage and distrust caused by the 16 years of the School Reform Commission. We are calling for three key criteria for our next school board — a board made up of the true stakeholders of Philadelphia’s schools, a board that ends the conflicts of interest that have plagued the last 16 years of school governance and a board that’s ready to fight for true racial and economic justice in our schools. We are the parents, educators and students who have been making our schools work for the past 16 years of state control — we are ready to lead.”