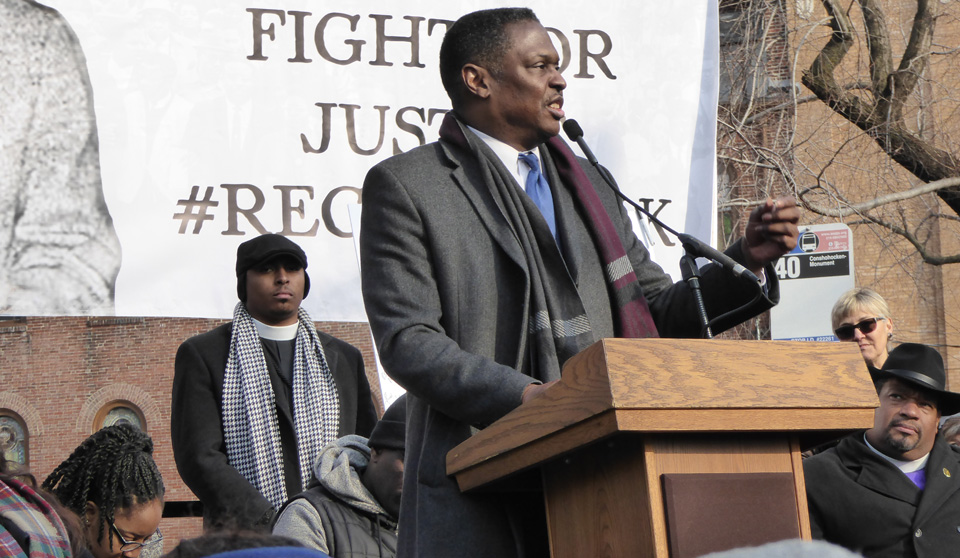 PHILADELPHIA -Mother Bethel AME Church was the first African Methodist Episcopal Church in the U.S. and was the site of the memorable meeting of free black men 200 years ago that voted unanimously to reject plans to “repatriate” or to send free African Americans “back” to settle in Africa.

Today, on the anniversary of that meeting, a dense, diverse and determined crowd of several thousand gathered outside the church at Sixth and Lombard Streets to recall the significance of that meeting and to oppose the agenda of the incoming administration of President-elect Donald Trump. An array of activists and movement leaders took the podium to blast the dangers posed by the Trump presidency and to emphasize the importance of united resistance.

The speakers included clergy of various faiths, labor leaders, elected officials, students and activists in the Black Lives Matter movement. The crowd heard poetry from high school students and from poet and activist Sonia Sanchez, who said, “I woke up this morning with my mind on Brother Martin….”

Many in the crowd carried signs calling for unity and resistance to the Trump agenda, with some calling attention to their particular area of activity: quality public education for all, fair housing, racial equality and an end to racism, and especially to the danger of a quick move by the new administration against people’s healthcare and the Affordable Care Act.

Patti Eakin, president of the nurses’ union, PASNAP, told of her years of working as an emergency room nurse and the people she had treated who, because of their lack of health insurance, did not receive the treatment they needed until it was too late.

The Rev. Gregory Holsten, leader of the POWER coalition (Philadelphians Organized to Witness, Empower and Rebuild) caught the spirit of the day when he told the crowd that the enormous gaps between the deep-pocketed corporations and the majority of the people cried out for change and that, for instance, the Comcast corporation and the University of Pennsylvania, have to share of their enormous wealth. He noted that, despite Philadelphia’s declaring itself a sanctuary city, the “stop and frisk” police policy was still being enforced, in many cases against people as young as middle school age.

Randi Weingarten, president of the American Federation of Teachers, which has declared its intention to oppose efforts to round up and deport undocumented immigrants, said, “I can’t get over the fact that the president-elect chose Martin Luther King weekend to take on John Lewis who acted in a minute more than this president-elect has in his lifetime…. We all must be John Lewis for the next four years…. If there is a Muslim registry, I am going to register; if there is a Latino student being deported, I am going to be there to resist….”

Rev. Jay Broadnax, head of the Philadelphia Black Clergy, took on the issue of fair housing and noted that the agenda coming from Washington threatens to displace millions and said, “Everybody has the right to live where they want…. People are tired of being pushed around by developers who build luxury housing and by absentee landlords….” He called for support for diverse communities.

City Councilwoman and longtime education activist Helen Gym, cited First Lady Michelle Obama saying that, “We can measure a society by its treatment of women and children” and continued, “Women will lead the charge for a higher minimum wage, for education justice…we will build a nation that we will call our own.”

State Sen.Vincent Hughes called for the broadest unity saying, “We must stand together; I can’t think of a better place to be today than right here at Mother Bethel, this historic place of celebration and of liberation.”

The Rev. Mark Tyler, senior pastor of Mother Bethel and chair of the rally, reminded everyone that the event was about organizing as well as demonstrating, saying, “We want to make sure that everyone leaves here with a connection to some group.”

Leaflets were distributed among the crowd with nearby locations where activists could gather for “breakout sessions” with others of their group or interest: labor, racial justice, climate justice, immigrant and economic justice, citizen advocacy training.

The march and rally was organized by the MLK Dare Coalition, and had broad sponsorship from labor, faith-based and religious groups, women’s rights groups, and student groups to name only a few.

Ben Sears is a retired teacher and union activist in Philadelphia.