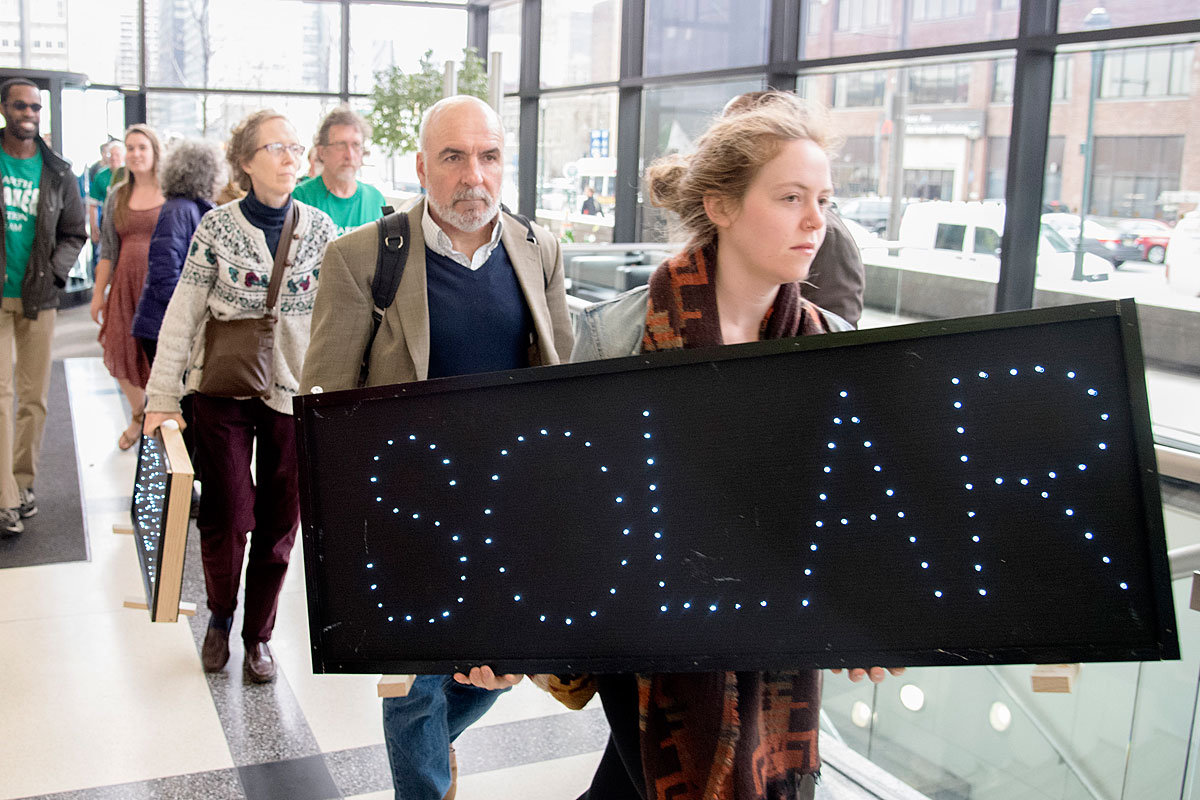 About 50 activists took over the lobby of Peco on Wednesday to hold a “teach-in” to demand that the utility support solar-energy development in North Philadelphia.

The 45-minute protest, which included preaching and poetry, was the latest demonstration organized by the Earth Quaker Action Team (EQAT) to apply pressure on Peco to divert some of its solar spending to impoverished neighborhoods.

“Solar energy is a tool you can use to feed the 40 percent of children who are starving in the city of Philadelphia,” said the Rev. Gregory Holston, pastor of New Vision United Methodist Church in North Philadelphia.

The activists, who have demonstrated every few weeks at the utility’s Market Street headquarters, present a confounding manifestation for Peco, which has not been targeted by activists since it completed construction of the two Limerick nuclear reactors 30 years ago.

Peco says EQAT’s “ultimatum” to support Serenity Soular, a North Philadelphia project with no track record of installing solar panels, presents it with an impossible choice. It buys its power through competitive, blind auctions.

“In fairness to all customers, we procure power in a way that provides the lowest-cost supply as possible,” said Ben Armstrong, a Peco spokesman.

“We just don’t buy that,” said Eileen Flanagan, the EQAT board chair. She says the price of solar power has fallen and is competitive with fossil fuels.

EQAT, whose previous corporate target was a bank that financed mountaintop removal of coal in Appalachia, launched its protests in September after one meeting with Peco.

Flanagan says the direct-action group is uninterested in negotiating.

“There are some groups that try to convince powerful people to make the right choice,” she said. “Our strategy is to make it uncomfortable for them to make the wrong choice.”

The activists say that if the utility does not agree to its demands by May 2, they will step up the campaign.

The Quaker protesters are among a growing number of climate-change activists who are challenging conventional market approaches to energy, aiming to prod Americans to reconsider their dependence on fossil fuels.

Peco says its hands are tied on how it buys power for its default-service customers, the mostly residential and small commercial users who have chosen not to shop for a competitive supplier. About 65 percent of Peco’s customers, who represent 37 percent of the power load, receive default service.

Since Pennsylvania separated distribution companies like Peco from the power-generation business in the 1990s and allowed customers to shop, the utility says the rules it must follow to buy power at auctions is closely prescribed by regulators.

By law, Peco is required to buy power at the lowest cost and not charge a markup.

Peco procures power in twice-yearly auctions, conducted by an independent contractor and supervised by the Pennsylvania Public Utility Commission. The bidders’ identities are not disclosed during the auctions, to eliminate chances of favoritism.

A 2004 law requires power suppliers each year to obtain an incrementally larger percentage of their electricity from alternative energy sources. During the 2015-16 year, energy sellers are required to buy 5.5 percent of their power from renewable sources, including 0.25 percent from solar generators. On June 1, the mandated solar percentage increases to 0.2933 percent.

Peco estimates it will buy 27,096 megawatt hours of solar energy for default customers this year to satisfy the mandate.

About 60 percent of its solar supply comes from Pennsylvania generators, Peco says. The state allows utilities to buy renewable energy from any qualified supplier in the 13-state area that is part of PJM Interconnection, the regional power grid.

The activists want Peco to exceed the legal requirements by rewriting its bidding terms to guarantee that a share of its solar energy comes from North Philadelphia providers that employ local residents.

“The law requires you to do a certain percent,” Holston, a leader of Philadelphians Organized to Witness, Empower and Rebuild (POWER), said at Wednesday’s protest. “But morally, you’re required to do much more.”

Peco could initiate a change in the bidding procedure, but the new process would require PUC approval after a formal review to ensure that it complied with the law, said Tanya McCloskey, Pennsylvania’s acting consumer advocate.