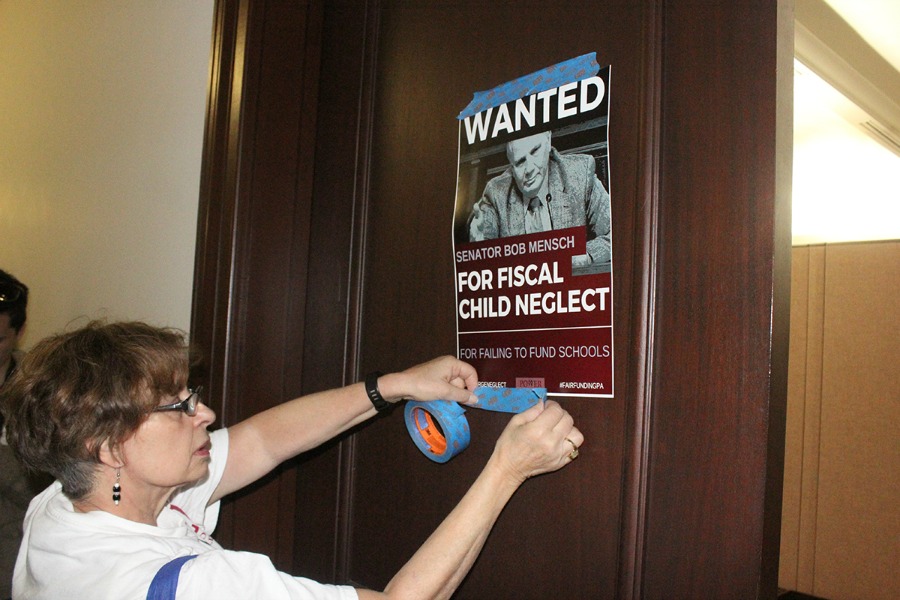 Pennsylvania community and religious leaders presented citizens’ warrants of arrest to state legislators on Thursday at the Pennsylvania State Capitol building, for not voting for adequate education funding.

“We are charging our legislators with fiscal child neglect,” said Rabbi Julie Greenberg, standing outside of the capitol building. “[We] are charging specific legislators for not voting for public education fairly.”

Greenberg, the leader of Congregation Leyv Ha-Ir, is a member of POWER Interfaith, which is the organization that advocated for education funding reform in Harrisburg. The Philadelphia-based religious organization is made up of about 60 congregations and works to empower people to improve their living conditions, Greenberg said.

The lack of funding has left some school distracts without adequate counselors, nurses, books and toilet paper, said Bishop Dwayne Royster, POWER’s executive director. Additionally, there are districts that owe millions of dollars, because of budget cuts and a lack of state appropriations, he said.

“It puts some of the school districts in such a situation that they owe loans in excess of $40 million,” Royster said, “that have to be paid back, with interest, to banks and other financial institutions.”

Carrying “wanted signs,” with names and faces of legislators, about two dozen of POWER’s members made their way into the Capitol building rotunda. They formed a circle around the chamber and chanted, “We charge neglect.” Their voices echoed down the corridors and drew the attention of passersby.

State Sen. Bob Mensch’s office was around the corner from the rotunda, and it became the protestors’ first stop. Outside his office, the group rallied together and decided who would introduce themselves and who would serve the warrant.

Photo by Troy Okum – News Editor / The Slate
The congregation and community leaders plan their next move, outside of Sen. Bob Mensch’s office.

Mensch was not in his office, but POWER left the warrant with his secretary.

“And three — malfeasance against taxpayers — who must borrow millions in funds to run the schools because the legislature failed to pass a budget.”

Another representative gave their demands, which included having the legislature pass a budget by June 30 that funds education based on a specific formula. The Basic Education Funding Commission, co-chaired by Sen. Pat Browne and Rep. Mike Vereb, developed a funding formula that take into account three factors unique to school districts.

These are: Adjustments for small, rural school districts; a measure of a districts median household income; and the district’s ability to generate local tax-related revenue compared to the state average.

The members of POWER left Mensch’s office, taping posters to his door, and moved on to Sen. John Rafferty, Jr.’s office, among others. Methodically, the group picked out members to go into Rafferty’s office, introduced themselves and presented the warrant.

“We came to make demands, we did not come to fight,” said Graie Barasch-Hagans, a community organizer with POWER. “The demand is that we have at least $400 million a year, an annual increase in basic education funding [and] a full-funding formula that was passed by a bi-partisan commission last year.”

After POWER serves the warrants, they will be coming back to the capitol building every Tuesday, eventually to hold a people’s court, Royster said.

“We’re going to be back in three weeks … for the people’s court,” he said. “We are actually going to try them and have a trial for them, right here in the rotunda.”