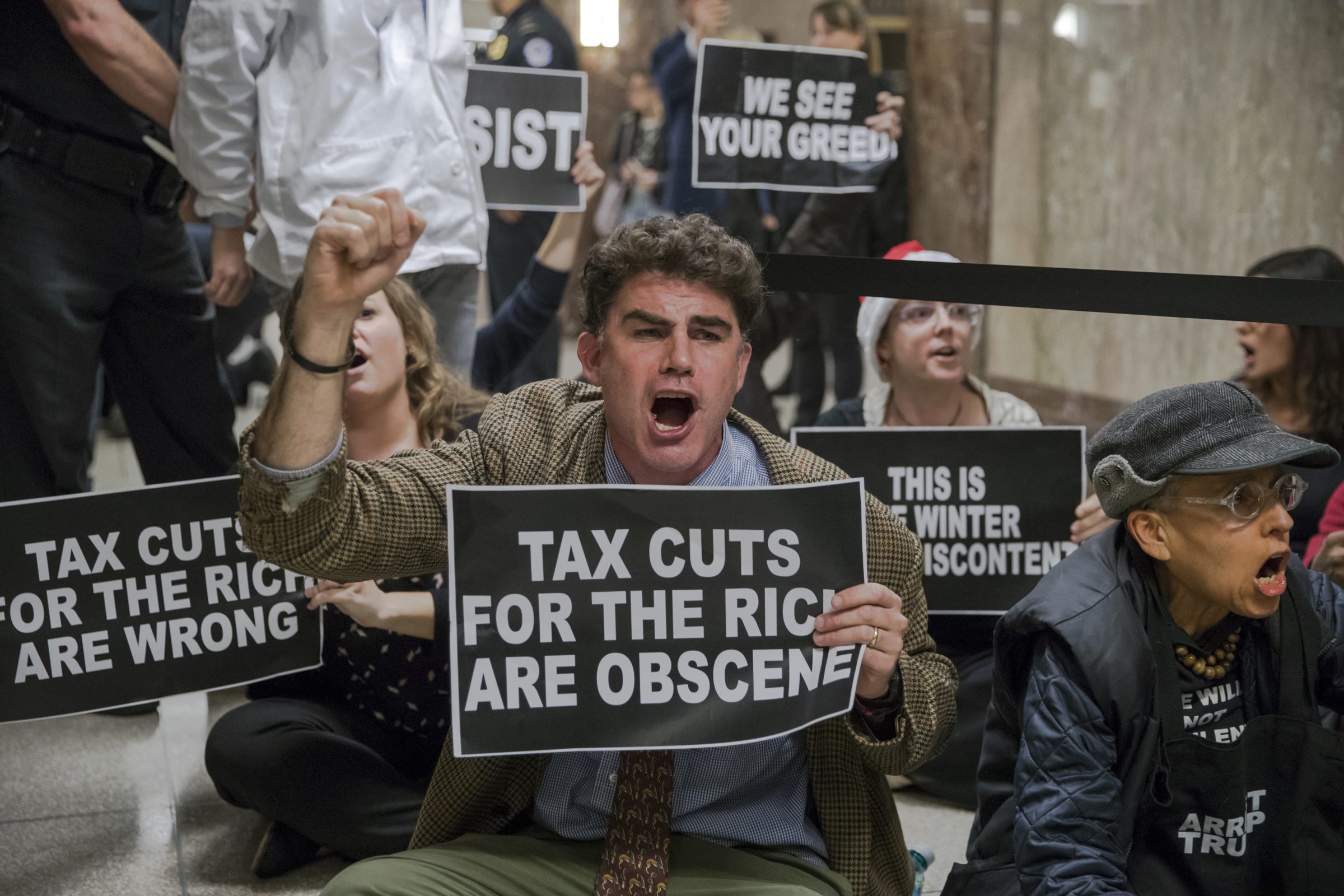 Protesters urge Costello to vote ‘no’ on GOP tax bill

While a group of five demonstrators led by clergy said prayers at the door of Costello’s office, a raucous group of more than 100 protesters later that day met on the courthouse steps.

Local faith leaders met at 10 a.m., and then a group of 18 organizations, hosted by the ALF-CIO, convened at noon. Both groups wanted Costello to hear the same message: Vote ‘no’ on the tax reform bill.

Both organizations merged to sing rewritten Christmas carols, led by Luke Bauerlein, including, “Hark, Costello, Hear Us Sing,” to the tune of “Hark the Herald Angels Sing:”

“Leaves our children worse off yet

“More from us this plan will take.”

The courthouse was decorated for the holidays. Speakers addressed the audience from between two bigger-than-life nutcrackers, just a few feet away from a huge Christmas tree and a banner that read, “Seasons Greetings.”

John Meyerson, chair of the Philadelphia Unemployment Project and former chair of the Southeast PA Area Labor Federation said his message was simple and that in the past he had addressed thousands.

“Never, not once ever, has one of those people told me their life would get better if their boss got a raise,” Meyerson said.

“We will be watching and we will remember in November,” he said.

Lauryn Schothorst, Costello’s chief of staff, reported that he was visiting the district Monday.

“Rep. Costello was meeting with employees and employers at a company in his district today, where he was told the tax bill is expected to increase wages for employees and help companies create more jobs for the community,” Schothorst said. “There are many voices in the district, and while some may focus on several of the same voices, Rep. Costello takes the time to listen to as many as he can, including the many civil conversations he has had with constituents who have reached out to the office in support of the tax bill.”

“Shame on you,” the demonstrators chanted, “Shame, shame, shame.”

Will Fuller, POWER Metro organizer and 6th District constituent, said the bill “rewards the greedy at the expense of the needy. Don’t let the Grinch steal Christmas.”

Most held protest signs high, including a person wearing a President Trump mask.

West Chester University student and Sixth District resident Lilah Saber said that the tax bill does not represent any of the 16,000 students that Costello represents.

Pastor Mark Young of the First United Methodist Church of Phoenixville said that the tax bill is “unbiblical.”

“It’s a transfer of wealth from those who can least afford it to those who least need it,” he said.

The door was locked and demonstrators were not allowed to enter Costello’s office, which recently was closed to the public, except by appointment only. Demonstrators were asked to sign a log at a table outside the office.

Kori Walter, district director, told protesters that the door was locked because demonstrators had become a distraction and were a security risk.

“By refusing to engage in a dialogue with us on this bill, Ryan Costello is deepening the hole that he has already dug for himself with his constituents through his juvenile insults and baseless accusations,” Sweet said. “Voters will not forget that while this wrecking ball is heading straight for the middle class in Pennsylvania’s 6th District, Ryan Costello was hiding out in Paul Ryan’s swamp.”