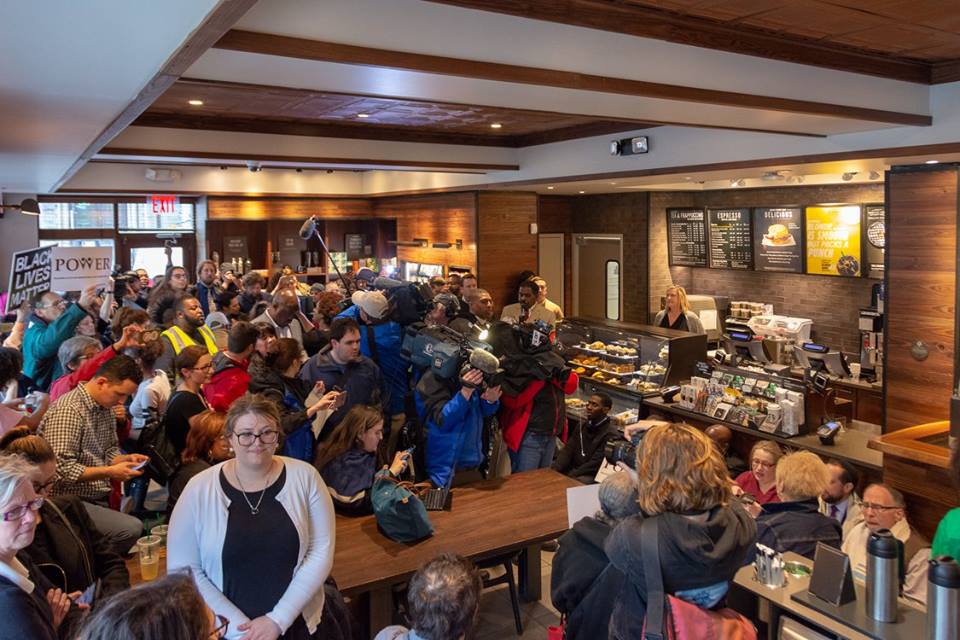 Philadelphians Organized to Witness Empower and Rebuild (POWER) staged sit-ins at two separate Starbucks in Center City Monday evening, protesting what they called the racial profiling and arrest of two Black men in the Starbucks on 18th and Spruce streets on Thursday.

Clergy of different faiths and lay people sat on the floor and in chairs, singing gospel and Negro spirituals, one of which was “Ain’t Gonna Let Nobody Turn Me Around.”

“The outrage is that even though the situation has occurred and even though everyone says over and over, ‘We apologize, we are sorry,’ except for our police commissioner, the simple fact is that Starbucks, as part of its business model, looks for areas that are gentrified … to be a safe haven. A safe haven to who? Certainly not to two African-American men who were sitting there last Thursday,” said the Rev. Gregory Holston, POWER executive director.

The sit-ins were not the “last action,” said the Rev. Mark Tyler, a POWER organizer. “This is not the last action. This is just the first. Right now, we are going to make sure we enforce the demands.”

The list of demands that Tyler referenced include: “that Starbucks pay workers at least $15 an hour; a meeting of POWER and our national partners with top Starbucks leadership including the CEO, COO and board chair to address the role Starbucks has played perpetuating racism and gentrification; policies and procedures regarding customers and investment in Black-owned franchises in African-American communities.”

POWER also listed demands for the Philadelphia Police Department, which include a review and discussion of “implicit bias” training, de-escalation techniques and body camera use policy.

“When [youth] tell us they are stopped by police, and they go in their underwear fondling them, saying they are looking for drugs, it has to be true,” Tyler said in a speech at the protest.

“When they tell us they are stopped for no purpose and put on the ground and made to spread eagle, so that they are just completely humiliated, it has to be true. If it can happen to stockbrokers and real estate brokers in a Starbucks, what happens in North Philadelphia when the cameras are not on? What happens in West Philadelphia when the cameras are not on? We are here to say we stand with the brothers who were accosted here and all the Black and brown brothers who have a similar testimony. We are not going anywhere.”

Tyler added that Police Commissioner Richard Ross’ stance was disappointing even as Starbucks leadership and Mayor Jim Kenney acknowledged the two men should not have been arrested.

“Leadership starts at the top. If the commissioner doesn’t see what’s wrong with it, then rank and file don’t either. He has set the tone. The fact that a white mayor and white CEO can see how wrong the arrest was and the commissioner cannot is disappointing.”

Prior to the POWER protest, several City Council members — including Kenyatta Johnson, Blondell Reynolds Brown and Helen Gym — denounced the incident. Councilman Derek Green and Rev. Kevin Johnson, a congressional candidate in the Third District, did so as well.

“Mayor Kenney certainly described the situation correctly when he said this is what race profiling and racial discrimination looks like in 2018,” said Andrea Custis, CEO of the Urban League. “I’m real proud to have Commissioner Ross as our police commissioner, but we missed an opportunity that day. We missed an opportunity to use common sense, to make a judgment and to use the skills and training to de-escalate a situation before it went out of control.”