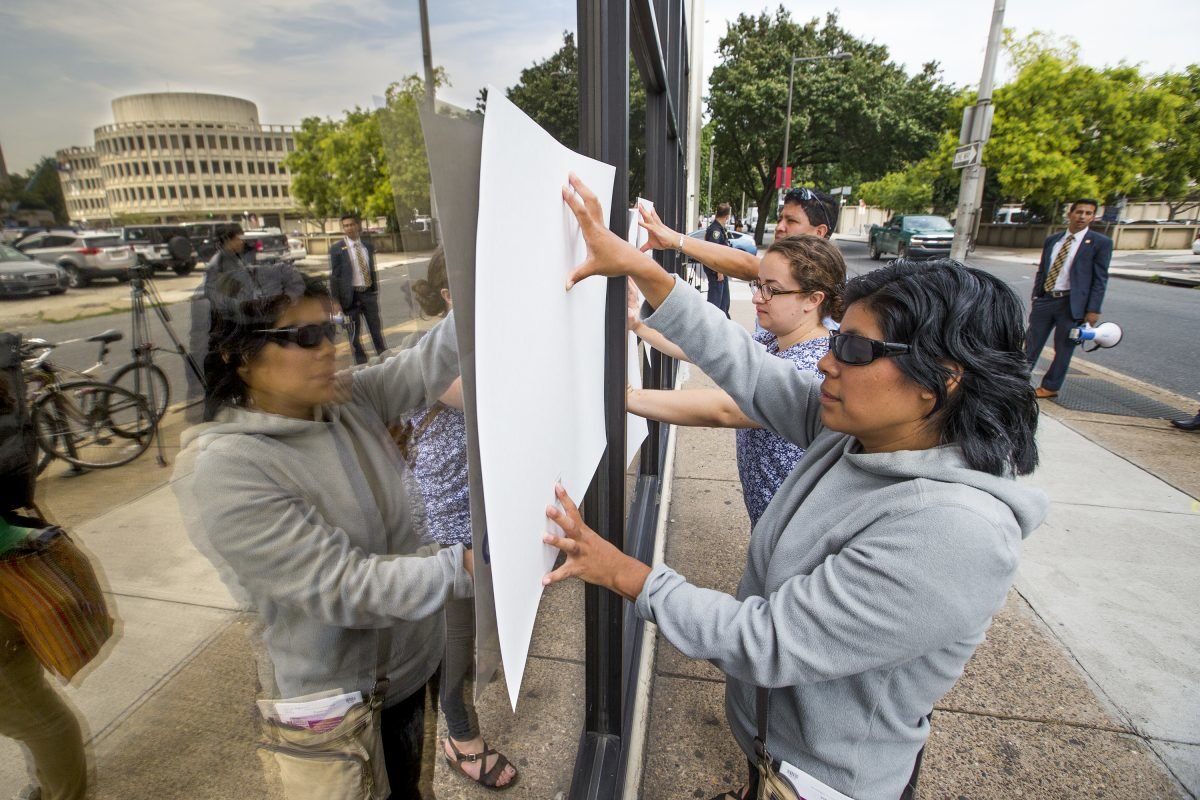 Protesters in Philly demand to see ICE plans for raids

By POWER InterfaithSeptember 13, 2017No Comments

“ICE operates with impunity,” said Erika Almiron, executive director of Juntos, one of the advocacy groups that led the demonstration in Center City. “As much as they demand our community show them our papers, it’s time for them to show us theirs.”

The protest took place amid the national debate over immigration, and only a week after President Trump announced he would rescind a program called Deferred Action for Childhood Arrivals (DACA), which bars the deportation of nearly 800,000 people who had been brought illegally to this country as children, and challenged Congress to deal with the issue.

Asked for comment, officials with ICE, which stands for Immigration and Customs Enforcement, issued a statement saying the agency “fully respects the rights of all people to voice their opinion peacefully without interference.”

Demonstrators gathered on Arch Street and marched north to the corner of Eighth and Cherry Streets, holding hand-lettered signs and shouting slogans through a bullhorn as they reached the ICE field office.

“What ICE is doing is just another attempt to criminalize black and brown people,” said the Rev. Gregory Holston, executive director of POWER, a faith-based activist organization. “We stand together. Show us your papers, ICE.”

“Every single day we have people caught in ICE’s cross hairs,” said City Councilwoman Maria Quiñones-Sánchez, who was among the demonstrators.

Organizers with Juntos, backed by more than 30 advocacy groups and civic leaders, said they had filed a Freedom of Information Act request to try to obtain ICE plans for rumored raids. Activists said similar filings were being made across the country at ICE offices.

The 11-page FOIA request seeks “information related to the planning, execution, cancellation, delay, alteration, or adjustment” of mass enforcement activities that have been reported to be in the works. It asks for all records related to the Philadelphia office’s involvement, including the selection of targets, use of biometric technology, training materials, and the number of officers who may be involved.

Philadelphia attorney Paul Safier, an FOIA specialist with Levine, Sullivan, Koch & Schulz, said the request could face a hard road. Generally, information on future raids can be legitimately withheld — the government is likely to argue that disclosure would interfere with current investigations or reveal law-enforcement techniques. It would probably make the same argument about past raids, Safier added.

Almiron said ICE had confirmed it received the FOIA request. Still, several demonstrators entered the ICE lobby and attempted to hand-deliver a paper copy to agency leaders. They were stopped at the security checkpoint, and peacefully took seats while a Homeland Security officer sought direction from his superiors. After minutes on the phone, he turned to the group.

“Don’t kill the messenger,” he said, explaining that no one in the administration would meet with them.

Juntos leaders said in a statement that under the direction of U.S Attorney General Jeff Sessions, the ICE deportation force “has become unchained and acting with impunity. With rumors circulating of massive raids planned by the agency, advocates plan to monitor the agency’s activity and force its corruption into public view.”

“Unfortunately,” Juntos leaders said in the statement, “we know that the deportation machine knows no bounds and ICE has begun using other methods to gain access to our community, such as waiting for people outside of our courts or even detaining people in our probation offices.”

On Monday, CNN reported that immigrant communities, already grappling with Trump’s decision to end DACA, face yet another challenge. A provision of immigration law called “temporary protected status,” in which the government grants immigrants temporary work authorizations and protection from deportation to homelands deemed dangerous, may not be renewed for some countries. That could mean the expulsion of potentially hundreds of thousands of people, the network said.

In May, the Inquirer chronicled the angst among the several thousand Haitians who live in the Philadelphia region under temporary protected status, which was granted to them after an earthquake devastated the island in 2010. A decision on their fate, expected from the Trump administration in July, was postponed until November by then-Homeland Security Secretary John F. Kelly.

Meanwhile, the Hill newspaper in Washington reported that ICE was preparing to hire 10,000 agents to arrest undocumented immigrants in sanctuary cities.