Home » PRESS RELEASE: No Verdict Can Ease Our Pain. A True Victory is a Changed System

Today, Derek Chauvin was convicted on all three charges for the murder of George Floyd. He is the first white police officer in Minnesota history to be convicted for killing a Black person. Today we feel relief as we take one step closer towards justice and reconciliation. In the case of Derek Chauvin, we have seen a break from the norm in a system that very rarely imposes serious criminal charges against police who murder while wearing the badge.

As people of faith, we know that our country’s legacy of racism, and violence, runs counter to what is prescribed in our most sacred texts. This verdict, while a relief today, is an outlier. As has been widely reported since testimony began on March 29, at least 64 people have died at the hands of police nationwide, with Black and Brown people representing more than half of the dead. This year we have seen an average of more than three killings a day.

“We recognize that there is no justice in this moment. No verdict can ease our pain. George Floyd’s children will never see their father again. How many families around the country grieve for lives lost at the hands of police? This is only one small victory in a place that has had very little justice. A true victory is a changed system. Here in Philadelphia, we must do our part to hold the police accountable. We are fighting tooth and nail through the police union contract. We are demanding $20M in the city budget for the Citizens Police Oversight Commission, and better mental health services for Philadelphians. We will not rest until we have a truly just system and every human being is recognized as a child of God.”
– Bishop Dwayne Royster, Executive Director POWER Interfaith

“The verdict was correct but unjust. A little girl still has no father, and the Floyd family and neighborhood lost a man whose love and talents will never be fully realized. We in the struggle for freedom and justice must transmute this verdict into a crucible that forges a new nation where Black bodies are free from the terror of police brutality, white supremacy and the perpetual white plaque of Black death!”
– Rev. Gregory Edwards, Director of POWER Lehigh Valley

“This does not fix things. Racism in the US is so deep and the carceral system is so broken. Every fiber of our beings must heal for things to change. Now it is up to us to work towards change in this country and be co-conspirators with our Black and Brown siblings. We must hold the police accountable.”
–Rabbi Linda Holtzmann, Tikkun Olam Chavurah, Philadelphia; Philadelphia Faith Leaders Caucus

“This is both the culmination of the last decade of activism and marching in the streets along with the 400-plus-year struggle of millions of anonymous Black Americans fighting for the right to breathe. This win, however, must lead to radical transformation in the governance and oversight of the policing of Black people. In Philadelphia, that means that the new Citizens Police Oversight Commission (CPOC) must have disciplinary power, independence from political pressure, and a budget of at least $20 million to be on par with Internal Affairs.”
– Rev. Mark Kelly Tyler, Pastor – Mother Bethel AME Church, Co-Director of POWER Interfaith’s Live Free Campaign

“Healing comes when justice prevails. Where is justice in America for Black and Brown people? Is there such a thing as justice where Black and Brown people are concerned? It’s obvious that there are double standards. Those laws on the books, those standards that tell them how to treat a Black or Brown person, give policemen the liberty to do what they do, and they do it gladly because they know that there is going to be no kind of consequence. With Derek Chauvin convicted I feel hopeful.”
– Rev. Patrica McAllister, POWER Lancaster

“As a Jewish people of many colors, cultures, and backgrounds, we know we cannot wait for justice to arrive of its own accord. ‘Tzedek, tzedek tirdof: Justice, Justice pursue it,’ declares the Torah. We have to be active in pursuing and co-creating a just, inclusive and equitable world. That means being together in working to eliminate racial injustice, systemic white supremacy and privilege in our own backyards and throughout this nation. We must also be willing to be present to and in solidarity with the grief, lament and rage of countless people of color in our country whose lives have and continue to be taken and are at risk daily. We hope for and welcome the healing that just verdicts may provide – however, as the Mishnah Sanhedrin states, ‘Whoever destroys a life, it is as if they destroyed an entire world.’ Until racially-motivated killing, police misuse of power, and gun violence are addressed, no true justice can be found in our gates.”
– Rabbi Shawn Zevit, Lead Rabbi of Miskahn, Co-chair of Philadelphia Faith Leaders Caucus 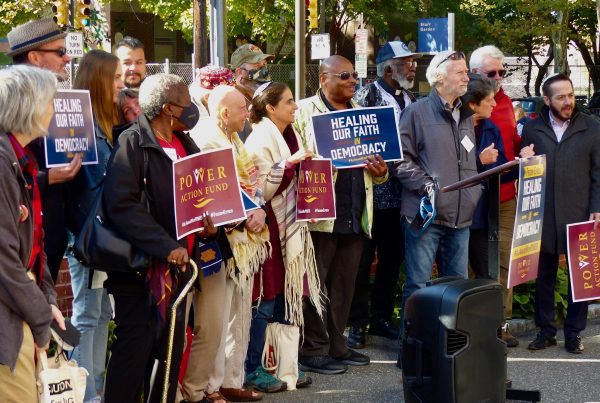 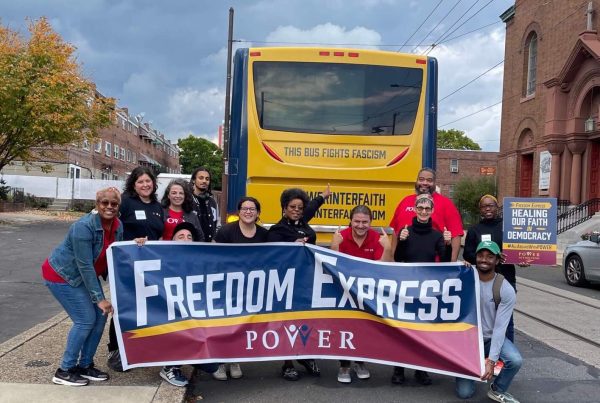