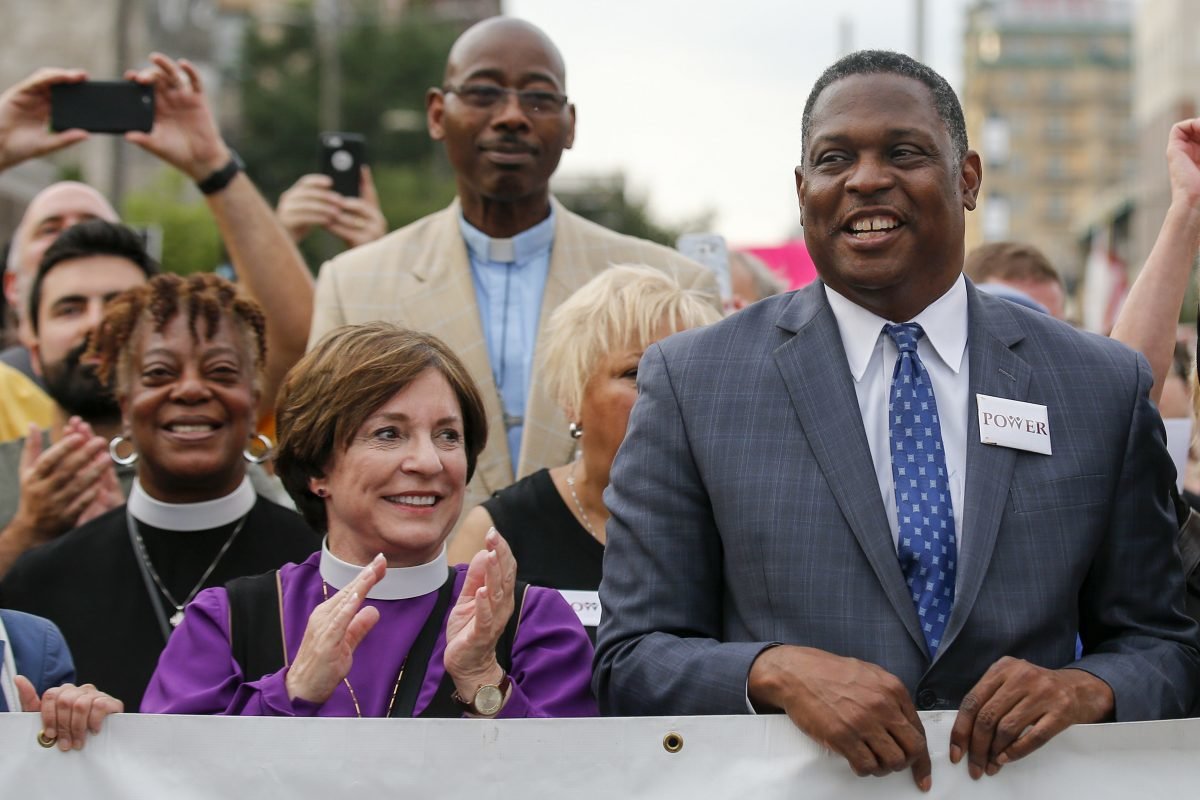 Preaching to both sides of religious aisle in Age of Trump

By POWER InterfaithAugust 21, 2017No Comments

At services this weekend, Rabbi Nathan Weiner plans to stand before members of Congregation Beth Tikvah in Marlton and talk about the deadly horror in Charlottesville. He will decry the hatred, racism, and anti-Semitism that were on unabashed display there. But what he will not do, he says, is speak the name of President Trump.

Yet he concedes he is struggling.  And in that, he’s got some high-minded company.

Even before the tiki-torch marches, the violence, and the president’s equivocal blame-laying, preaching in the Age of Trump has been fraught territory for faith leaders nationwide, many of whom confront flocks that sit, sometimes testily, on opposing sides of the partisan aisle.  As pastors, they must be “caring and compassionate, listening and holding communities and families together,” said the Rev. Nicole Diroff, associate director of the Interfaith Center of Greater Philadelphia. But as voices of a higher authority, they also must call out injustice and immorality, and “speak truth to power.”

The challenge is to do both without angering and driving away those they are charged to lead.

“I’m struggling to find a way to do it that will make me proud of my decisions in 50 years,” said Weiner, “and allow me to bring as many people as I can into the fold.”

The tragic events of Charlottesville, and Trump’s reaction to them, have eased that dilemma for some clergy. There comes a time when naming names is imperative, said the Rev. Wayne Croft Sr., senior pastor of St. Paul’s Baptist Church in West Chester.  In last Sunday’s sermon he did, condemning the commander-in-chief as lacking moral courage by first attributing the mayhem to “many sides” and failing to point the presidential finger at the white supremacist groups massed in the Virginia college town.

A pastoral calling demands taking sides, said the Rev. Leslie D. Callahan of St. Paul’s Baptist Church in Philadelphia, who has openly opposed the Trump administration for what she calls its “racist pedigree.”

“Our commitment to social justice and human thriving and human rights can’t be opaque or general. [Pastors] need to be very explicit and emphatic,” she said. “So I think my preaching is clearer than it’s ever been.”

At a time of heightened political tensions, however, that forthrightness has the potential to be misinterpreted as judgment, of disapproval of the people in the pews.  When Croft assailed the president, his predominantly African American congregation — only a smattering of them Republicans — responded with applause and amens.  Such is not always the case.

Since the November election, several Lutheran clergy reported being approached by church members complaining that a particular sermon was chosen as a way to criticize their political choice. In fact, the denomination’s lectionary dictates the preaching topics for the week, said Bishop Claire Burkat of the Southeastern Pennsylvania Conference of the Evangelical Lutheran Church in America (ELCA).

“Sometimes the ground is a mountaintop and I’m there with hundreds of others,” she said. And “sometimes it’s a very small patch and I need to be sure that I’m firmly planted.”

Imam Anwar Muhamin of  the Quba Masjid in Philadelphia and the Islamic Center of Reading has found that the ability to have thoughtful, measured discussions has been further complicated by the constant undermining of the truth.

“We are living in a time when the truth has multiple definitions,” he said. “Before, a fact was a fact. Now… people are adapting postures not even rooted in truth, so it’s hard to have a productive conversation.”

Earlier this year, the Interfaith Center’s Religious Leaders Council hosted a seminar for clergy at United Lutheran Seminary in Mount Airy (formerly Lutheran Theological Seminary) to discuss the challenge of ministering to such a divided nation. About 180 religious leaders attended,

Some said they had discovered that their congregations were more divided than they had thought, with Trump and Clinton supporters popping up in unlikely places. Some realized an uncomfortable fact: Their personal views varied substantially from those of most of the people in their congregation.

The Rev. Keith Anderson of Upper Dublin Lutheran Church found pain in the political divides in his congregation.  Since the campaign, some families had been so torn apart by the intensity of their differences that members confided to their pastor that they felt cut off from those they love.

So Anderson took on the role of healer-in chief. He organized a series of seminars and brought in a facilitator trained at Pennsylvania State University’s Center for Public Diplomacy to teach conversation skills that would help people communicate and understand the complexity of “why they believe what they believe,” he said. He also brought in the social action group POWER to discuss the role of faith in public life.

The Rev. Gregory Holston, POWER’s executive director, said he empathizes with  pastors shepherding divided congregations, but added that “there is always pressure to preach the Gospel full and free.” Doing so has stirred trouble and hostility since biblical times, said Holston, also pastor of Janes Memorial United Methodist Church in Germantown.

Last Wednesday, under POWER’s sponsorship, he led a “Philly Is Charlottesville” anti-racism march on Broad Street with Burkat and other clergy marching alongside. In the pulpit Sunday, Holston plans to talk about racial justice. The Rev. Christopher Walsh of St. Raymond of Penafort Catholic Church in Philadelphia and the Rev. Tom Newton of Christ Our Light parish in Cherry Hill say they will do likewise.

“I’m not preaching against the president,” said Newton. “I’m not going to stand up at the lectern and say that President Trump is a horrible, mean-spirited, bigoted person. I don’t know that.

“We have people in our congregation who support President Trump and may still,” he said. “I’m speaking against racism, exclusion, in favor of welcoming refugees. That is what the Gospel teaches us.”