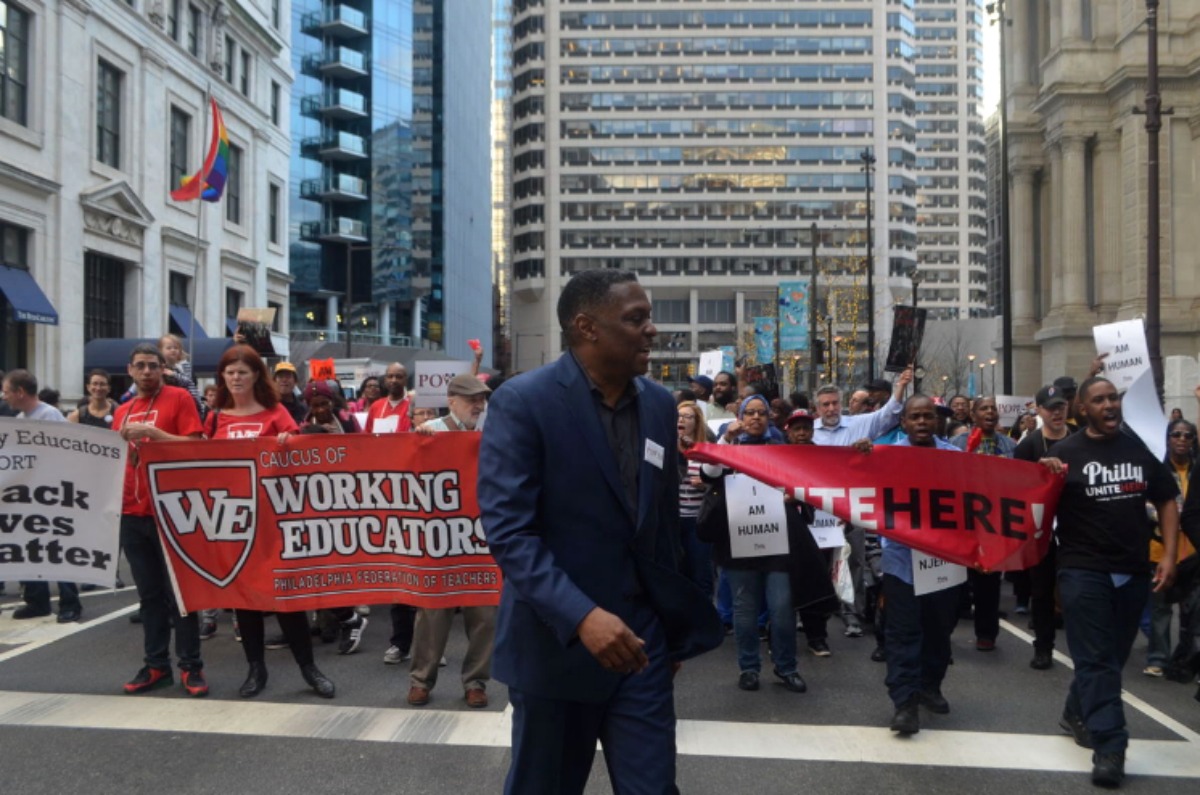 More than 200 demonstrators marched around the perimeter of City Hall, calling for an increase in minimum wage on Tuesday afternoon — the 49th anniversary of Martin Luther King Jr.’s assassination.

The march followed an hour-long rally that was organized by the religious activism group POWER (Philadelphians Organized to Witness, Empower and Rebuild) in recognition of King’s work for the labor movement.

“Martin Luther King Jr., 49 years ago, was assassinated where he was standing up for garbage workers because he knew the civil rights movement and the labor movement had to be one justice movement,” said Rev. Gregory Holston, POWER Executive Director. “Today, we are trying to symbolize that. The labor movement, the civil rights movement, Fight for 15, Black Lives Matter are coming together for one justice movement in this city and beyond.”

Because of Philadelphia’s status as “the poorest big city in the country,” and its violence, Holston said POWER is demanding that local and state officials raise the minimum wage.

Holston added that elected officials who don’t believe that the minimum wage can be raised need to be voted out of office.

“If you don’t believe the poorest big city in the country can be the strongest city in this country, you need to get out of office right now,” he said.

At the rally, several minimum wage workers spoke about their plight.

“My demand is to get $15 and a union,” said fast food worker Ivory Bishop, 27. “I have two kids — seven and nine. I’m a single mother. just trying to work and get through life. My kids want to go to summer camp and I can’t afford it.”

Avery Austin, 27, a worker who works for an airline catering company, makes “$9.40” an hour . He said employees like him, who work for airport contractors and subcontractors, “don’t make as much as the food workers in the terminal because we are not considered airport workers. [But] everything we do is for the airlines. If we stop working, no planes are taking off.”

Austin said he has been working at the airport for a couple of months and so far his employer has granted a 20 cent raise.

“What is 20 cent going to do?” he wondered. “We have babies. We have families. They have to understand this is real. It’s not a want. It’s a demand.”

Other issues raised at the rally included immigration and racism.

“Black Lives Matter stands in solidarity with all the groups here,” said Asa Khalif, Black Lives Matter organizer. “This is a time we must put aside our differences. We have antiblackness…our Muslim brothers are under attack. We cannot allow this raggedy system to divide us.”

After the march, hundreds of demonstrators walked into the Arch Street United Methodist Church for a POWER training that focused on the “black economy” and how people could organize to have their demands met. The demonstrators also signed pledge cards, promising to vote in the next district attorney election.