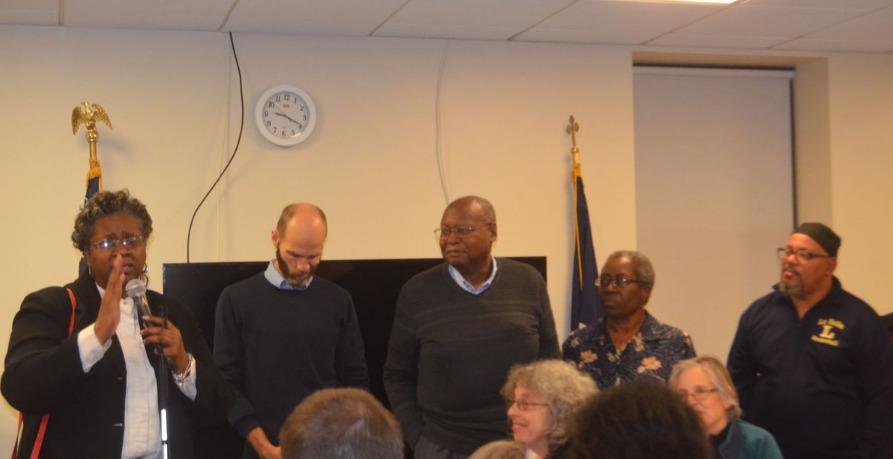 By POWER InterfaithNovember 30, 2016No Comments

Philadelphians Organized to Witness, Empower and Rebuild (POWER) hosted a voter engagement debriefing on Nov. 15, discussing next steps after the election of Donald Trump as president.

“…We made a footprint [in this election],” said the Rev. Melanie DeBose, POWER’S Co-Interim Executive Director. “We gathered at least another 5,000 names in our database. We will use that information to continue to have these conversations. The fight is not over. It’s only just the beginning.”

Prior to the election, POWER worked in Philadelphia and surrounding counties, from August to October, and registered more than 1,500 people to vote, according to POWER spokesperson Beulah Osueke. At the debriefing, they discussed ways to motivate people around their work and new approaches, especially under Trump’s administration.

“We’re taking time to see how to deal with all of this after the election,” said the Rev. Gregory Holston, POWER leader. “There was some rethinking about our efforts in building a city of opportunity that works for all people.” Holston listed some takeaways from the meeting, including, “building new and greater relationships with people of different backgrounds; calling on politicians to renounce hate; and rebuilding efforts to do public education. We need to educate communities about issues that affect them in a greater way — economic opportunity, racial injustice and mass incarceration.” Some of the ideas written by POWER members were “reach out to the vulnerable” and “be present for Muslims and immigrants.”

The Rev. Mark Tyler, Senior Pastor of Mother Bethel AME Church and a POWER leader, said he is using his dissatisfaction with the election as a source of power.

“When I saw the results of the election, I felt sick to my stomach. I felt that way because of what I perceived to be hateful rhetoric from Trump … that it would turn into real actions around the issues that concern me and other people,” said Tyler. “Those feelings have turned into resolve and determination. The history of Black people is having to overcome in times of great political opposition. What we’ve done in the past, we can do today.”

“Black people — we’ve come through the Middle Passage, slavery and Jim Crow,” he said. “Donald Trump don’t mean nothing to us. We fear God. We don’t fear none of that.”

“We might feel a sense of defeat, but we will experience the victory,” she said. “You can’t keep coming up against the people of God and not crumble in defeat.”