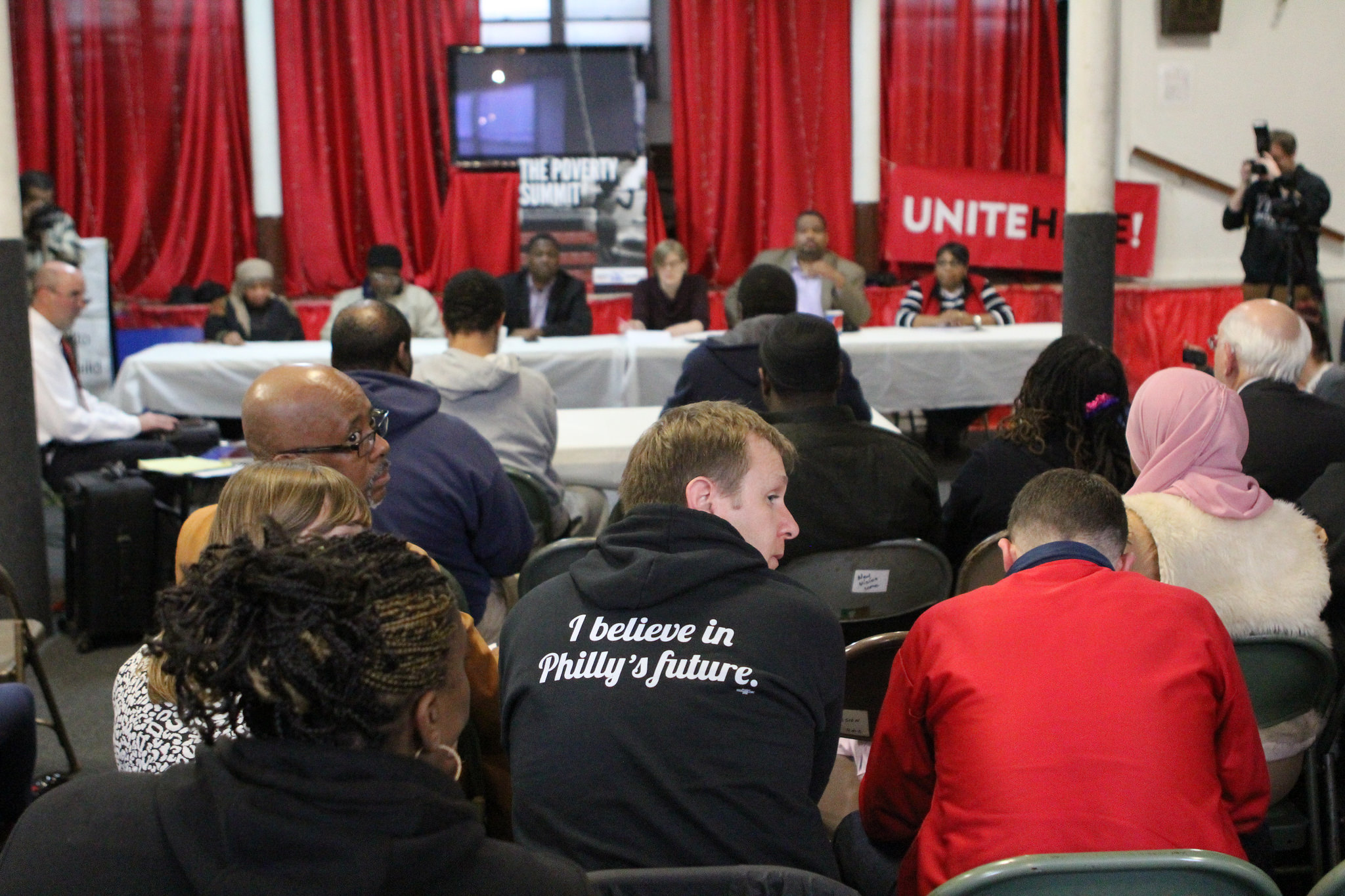 By POWER InterfaithMarch 18, 2016No Comments

Opportunities Industrialization Center (OIC), along with Philadelphians Organized to Witness Empower and Rebuild (POWER) and Unite Here! Local 274 held a public hearing on poverty this week at the New Vision United Methodist Church.

The hearing is one of two that will culminate with the “Poverty Summit: Philly Solutions for Philly Poverty,” scheduled for May 19. It featured the testimonies of dozens of laborers, who have lived or are living in poverty as a result of working underpaying, non-unionized jobs. Most of those who testified were Black.

“This hearing is the first step in building to our poverty summit,” said the Rev. Gregory Holston, CEO and President, OIC. “We are attempting to involve the entire community to [devise] solutions for poverty in Philadelphia. Too often people point to Harrisburg and Washington and we haven’t done all we can to eradicate poverty.”

Holston continued to describe Philadelphia as being in a “state of emergency,” citing the city’s “12 percent deep-poverty rate” and “26 percent poverty rate.” As of 2015, the city had the highest deep-poverty rate of the country’s 10 largest cities.

Workers shared stories of working part time while trying to put their children through college; struggling to pay rent and utilities with minimum-wage pay; and spending nearly half of their minimum wage pay on medications.

“I am working six to seven part-time jobs and I pay over half of my son’s private school tuition,” said Carlton Epps, a suite attendant at Lincoln Financial Field. Epps, in his 50s, said he has a degree and believes that it is his age that has prevented him from getting a full-time job.

From his experience in service at the stadium, he said more training for people for specialized service positions, such as suite attendants, would mean “better opportunities.”

Meanda Hall, a professional housekeeper for the Hilton, also testified. She is a unionized worker and makes about $16 an hour, but she said by the time she pays her monthly rent of $650, in addition to utilities and a cellphone bill, there is hardly any money left over.

Alfred Williams, a non-unionized baggage handler for Prime Flight, which is a contractor for the Philadelphia International Airport makes $12 an hour, with no benefits, working 40 hours a week. He started off making $7.25, but after POWER led an effort to push for an increase in minimum wage last year, which City Council approved, his pay was bumped up. He is one of several airport workers that include wheelchair attendants and baggage handlers, who testified Wednesday evening.

Williams said he is now trying to organize his co-workers to become unionized so they can advocate for better treatment and wages.

“We are fighting for union representation,” he said. “City Council approved it but Prime Flight is not trying to give us a union. Whatever the boss says, we have to do. We are trying to show the company, it’s all of us trying to enlist.”

Another airport worker said since the minimum wage has been bumped up, full-time hours have been cut, so they are still making the same amount as if they were being paid minimum wage; and that the raise came with no vacation or medical time.

Marquon added that he was “released because he took a huge stance” for some cause while working there. “I viewed them as slumlords,” he said. “I wouldn’t advise anyone to go work there.”

Another extreme example was that of Daniel Grant, 29, and a father of two sons. He works for Sky Chefs, also an airport contractor, making $11 an hour, but pays $650 a month in child support. He said he is able to maintain living expenses because he lives with several other roommates in a house that they rent.

Generally, the unionized workers who testified at the hearing made higher wages and had free benefits. They also felt a sense of more job satisfaction.

“I feel more empowered,” said Earlene Bly, a hotel housekeeper and mother of three and grandmother to eight. “Working with the union has changed me and my life for the better. My bosses respect me more now. They come and ask me when they are about to change something. [And] the negotiation skills I’ve learned come in handy. How do you think this city would change if every worker was unionized?”

Bly continued that the “incarceration and the infant mortality rate” would go down if more decent paying union jobs were available.

Robert Pate, a unionized chef for Harrah’s casino, agreed. Some time prior to his current job, he said he was making $9.50 an hour as a non-unionized supervisor. Now, as a union worker, he is making $29 an hour.

“I have a decent home, car and I can send my kids to a good school,” he said. “If [students] in high school felt like they could come out and get a decent job, they wouldn’t mess around,” he said. “We’re not asking to be millionaires. We are asking to patronize the places we work for.”

Wayne Jacobs, co-founder of X-offenders for Community Empowerment pushed the panelists to consider the issues of returning citizens when forming their solutions for the poverty summit.

“Half of the jobs you are talking about, they can’t apply for because of their background,” said Jacobs. “As long as we don’t include formerly incarcerated [citizens] in the conversation, we are going to stay in poverty.”

Holston said the testimonies and suggestions would be used to create a report for the poverty summit.

The next public hearing will feature testimonies from academics and community organizers and is scheduled for April 13 at the First United Methodist Church of Germantown.