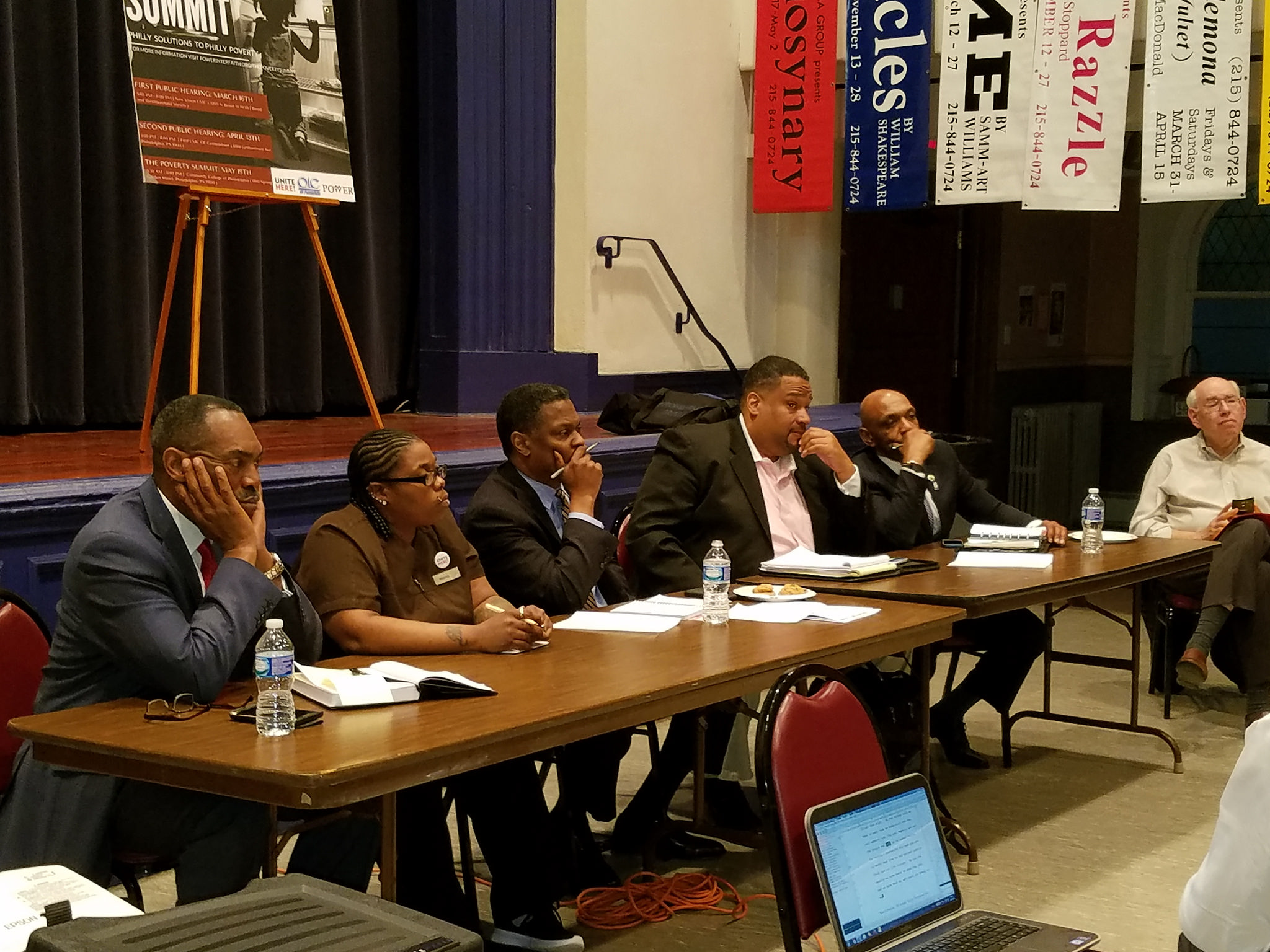 By POWER InterfaithMay 5, 2016No Comments

The Opportunities Industrialization Corporation of America (OICA) and Philadelphians Organized to Witness, Empower and Rebuild (POWER) hosted their second poverty hearing at the First United Methodist Church of Germantown (FUMCOG) last month in preparation for their May 19 “Poverty Summit.”

The summit will be an all day event offering different sessions for people to discuss the recommendations and solutions developed by OICA and POWER, and the delivery of a final report for next steps.

The first hearing, held in March, featured testimonies from working class citizens on the importance of unions and raising the minimum wage.

The second hearing, held April 13, at the First United Methodist Church of Germantown, centered on testimonies from community organizers, educators and nonprofit leads, who shared their ideas to solve poverty.

“It was exciting to hear all the solutions and see how so many are intertwined with each other to build an agenda to end poverty in the city,” said Rev. Gregory Holston, OICA CEO and President. “There was a consensus…these are the kinds of things we need to do because we have the power to do them right within in the city of Philadelphia. We don’t have to ask Harrisburg. We don’t have to ask Washington, D.C.”

Ideas suggested at the April hearing focused on a range of areas — from transportation to child care.

“We have to make Drexel realize there must be mixed income housing,” said Markel. “New mixed income housing is important.” Markel added that “housing policy is education policy” and “you can’t have reform of schools without changing the pattern of where people live.”

Arlene Wayne-Thomas, President of the Philadelphia Metropolitan Board of Realists, the local chapter of the National Association of Real Estate Brokers, an organization supporting Black realtors, said home ownership is one piece of ending poverty.

“We have to be able to obtain mortgages,” she said, especially describing the plight of Black potential home buyers. “If we are not getting credit, we cannot buy a house. The difficulty is criteria — high credit ratings.” Thomas added that one answer to this issue is to “give more flexibility to the policies lenders use.”

“We should have universal high quality care. If not free, then it has to be affordable to everyone,” she said, adding that pre-school “can help inoculate children against the damaging effects of poverty and trauma.”

Transportation was another major issue referenced at the hearing.

John Dodds, of the Philadelphia Unemployment Proiect, said the city should explore ways transportation can be made available for the jobs outside of the city.

“African-Americans spend 22 percent more time getting to work than white workers,” he said. “[And] studies show people need access to vehicles to get to work. We need SEPTA to provide access to suburban jobs for Philadelphia residents. Employers chose to leave our city long ago. [Workers] are stuck with jobs in the city that don’t pay as much.”

Other solutions included ideas promoting grocery store co-ops; investment in solar projects that could result in skilled trainings and jobs; and a public bank.

Holston concluded the hearing, encouraging people to think about solutions to mass incarceration, which he noted as a major driver of poverty.

The May 19 Poverty Summit will be held at the Community College of Philadelphia, from 8 a.m. to 8 p.m.