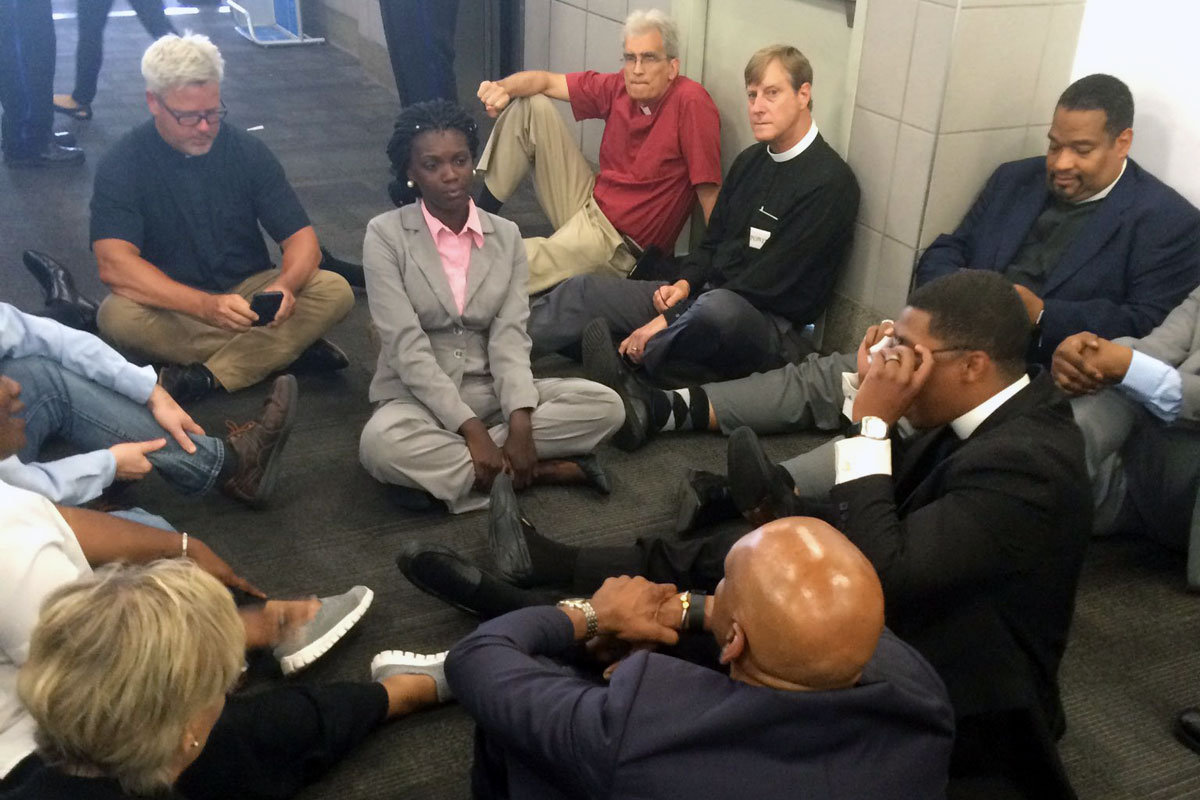 By POWER InterfaithJuly 25, 2016No Comments

The Democratic National Convention is still two days away, but police already have begun issuing civil citations to protesters.

Police yesterday cited 10 clergy members for disorderly conduct at the Philadelphia International Airport after the preachers, frustrated that American Airlines officials wouldn’t meet with them about a fired worker, held an impromptu sit-in. Although the pastors were not arrested, police briefly zip-tied their hands as they removed them from the walkway, in front of a TSA security checkpoint, where they sat singing songs.

Those cited included a who’s who of the city’s activist clergy, including Bishop Dwayne Royster, the outgoing executive director of Philadelphians Organized to Witness, Empower and Rebuild (POWER); the Rev. Jay Broadnax, president of the Black Clergy of Philadelphia; the Rev. Mark Tyler of Mother Bethel African Methodist Episcopal Church; and the Rev. Robin Hynicka of the Arch Street United Methodist Church.

“While we hadn’t planned to sit in, American Airlines’ refusal to meet with good and well-meaning clergy about the livelihood of a young mother with children having been unfairly dismissed made me and the rest of us uncomfortable, so we decided by moral conscience to sit down and obstruct the walkway,” said Hynicka, whose church has long been a haven for city activists.

The pastors say the woman, a wheelchair attendant who worked for subcontractor Prospect Airport Services, was fired Wednesday after participating in a Tuesdayprotest for better wages, benefits and the right to unionize. Airport workers havethreatened to strike during the DNC if their demands aren’t met.

But American Airlines spokeswoman Victoria Lupica, who spoke with the clergy before they were cited yesterday, said the airline’s offices are beyond the secured area, where only employees and ticketed customers are allowed.

Besides, she added, it would have been “inappropriate” for American Airlines executives to talk with the pastors.

“If you want to talk to an employer about reinstating an employee, go to the employer,” Lupica said. “We would have no idea of the circumstances of why this person was dismissed from their job; it’s not our employee.”

Philadelphia clergy have long championed the rights of airport workers.

“I don’t doubt this will be the first of many,” Royster said of the citation. “For us at POWER, the objective is never to get arrested. We’re trying to win something here – a decent wage and good working conditions for airport workers, who come from some of the poorest neighborhoods in the city. The wages there (at the airport) are abysmal. The working conditions are horrible. We think they deserve better than that.”

He added: “We will be back, and we will be more and more disruptive to their business there. When they do what’s right, then they will have peace at the airport.”

The civil citations are a new city strategy to decriminalize minor offenses: Passed into law just last month, the citations enable police to fine (instead of arrest) citizens for infractions like obstructing the highway, disorderly conduct and failure to disperse. City officials say the strategy is expected to divert as many as 10,000 incidents a year out of the clogged criminal justice system. As city code violations, the offense doesn’t go on an offender’s criminal record, nor result in an arrest warrant or jail time.

The preachers’ citations weren’t the first issued. For example, immigration activists – including a 13-year-old boy – were cited for blocking a highway ramp during a protest last month. Police couldn’t immediately provide numbers on how many have been issued to date.

Critics say the citations unfairly deprive citizens of the right to challenge them in court. (The citations are handled by the city’s Bureau of Administrative Adjudication, which also handles disputed parking tickets.)

“For me, when I was arrested (at an unrelated protest), going to court was really important – it was another way to spread our message,” Hynicka said.

He added: “We’re going to fight these things (citations); we’re not going to pay them. I would suggest no one pay them.”