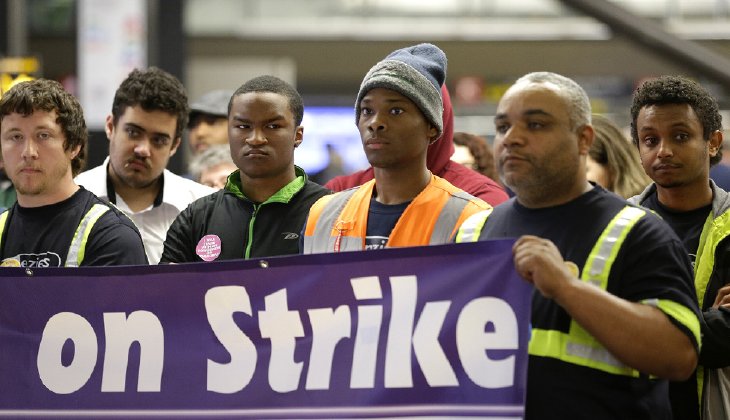 By POWER InterfaithJuly 14, 2016No Comments

Philadelphia airport workers are preparing to go on strike when the Democratic National Convention hits the City of Brotherly Love later this month.

Security workers, baggage handlers, and other workers decided to strike as part of their effort to fight for a $15 per hour minimum wage and is partnering with a union, 32BJ SEIU, to maximize and amplify its effort.

“The airport is Philadelphia’s modern day plantation,” said Rev. Greg Holston of Philadelphians Organized to Witness Empower and Rebuild, in a statement shared by the SEIU. “In the poorest big city in the country, it is a moral outrage that while billions are made at the airport every year, these men and women languish in poverty. We demand that the city, subcontractors and American Airlines don’t leave these workers behind.”

The Democratic Party’s platform expressly includes advocating for a $15 per hour minimum wage, but that will not stop strikers from disrupting the travel of convention-goers who share their beliefs.

“The hardworking men and women at the airport exemplify everything that the DNC platform is about,” said Gabe Morgan, vice president of 32BJ SEIU, in a statement. “They are at the forefront of the fight to rebuild the middle class and address racial and economic disparities.”

Whether the strikers’ actions successfully disrupt the function of the airport for convention-goers remains unclear, but 32BJ SEIU claims there are hundreds of airport workers ready to go on strike.