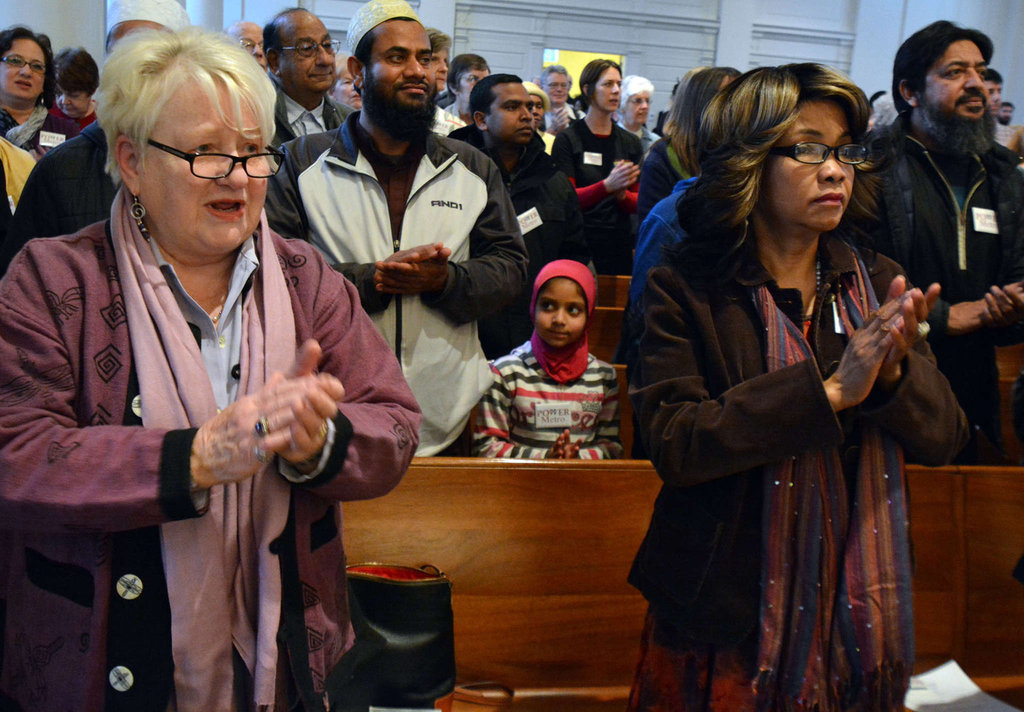 By POWER InterfaithFebruary 22, 2016No Comments

Fresh off recent successes rallying urban Jewish, Muslim, and Christian congregations to enter the political fray, one of Philadelphia’s largest interfaith coalitions has now set its sights on the region.

On Sunday, Philadelphians Organized to Witness Empower and Rebuild (POWER) welcomed members from 16 congregations in Montgomery and Delaware Counties to publicly launch POWER Metro – a new chapter of the social advocacy group out to prove that problems of poverty, crime, homelessness, and poorly funded public education are not just the concerns of city dwellers.

“People think the suburbs don’t suffer from the same problems,” said Dwayne D. Royster, POWER’s executive director and pastor at Living Water United Church of Christ in Oxford Circle. “A lot of politicians want to segment these issues as ‘urban problems.’ But they are issues that affect the boroughs and townships, too.”

But as about 450 faithful – some wearing yarmulkes, others in starched clerical collars or the taqiyah, the rounded skullcap traditionally worn by Muslim men – participated in a two-hour kickoff service at Trinity Lutheran Church in Lansdale, a question hung over the room.

Could the group that proved so successful at building a motivated and engaged coalition in Philadelphia – a city with an established tradition of clergy members wielding political pressure from the pulpit – translate so easily to the region’s far-flung and disparate communities outside the city?

“There have been pockets before of church groups working together on issues in their own communities,” said Royster, who lives in Norristown. “But we’re aiming for a larger stage. We’re thinking counties-wide.”

Todd Stavrakos, for one, was optimistic. And the pastor at Gladwyne Presbyterian Church set out Sunday to prove just how serious he was.

Following a handful of speakers who delivered rousing calls-to-action on issues such as raising the minimum wage and finding a fair funding formula for public education in Pennsylvania, Stavrakos took the stage and called out Gov. Wolf and four state lawmakers who declined the group’s invitation to attend Sunday’s meeting.

Then, he encouraged his audience to do something usually discouraged in church – whip out their cellphones. Stavrakos told the crowd to dial the politicians directly from their pews.

“These people that work for you didn’t think it was important enough to be here today,” he told the crowd. “Our gathering here should be a wake-up call from them.”

Since its founding in 2011, POWER Philadelphia has mobilized its membership to lobby politicians directly, participate in sophisticated public-relations campaigns, and engage in good old-fashioned door-to-door politicking to support causes ranging from education funding to affordable housing.

The group’s most touted success came in 2014 with a push to put a measure on city ballots that would raise the minimum wage for employees working for city contractors.

In the run-up to the vote, POWER deployed its member congregations to reach 50,000 Philadelphians – an effort that helped the measure pass overwhelmingly.

The new suburban chapter includes member congregations from 14 different municipalities that range from some of Southeastern Pennsylvania’s wealthiest Main Line enclaves to the likes of Norristown, with urban-style problems to rival Philadelphia’s.

“This conversation’s going to require us to think about what geographic circle is important to us,” said David Vossen, of St. Rose of Lima Catholic Church in North Wales. “Is it our city, our country, the entire state?”

From its inception Sunday, the new chapter’s organizers appeared to appreciate that different tactics might be necessary for success.

For example, the two primary issues the group have – education funding and the minimum wage – are statewide concerns, requiring action from Harrisburg.

And at his 100-member congregation at St. Luke United Methodist Church in Bryn Mawr, the Rev. David Tatgenhorst has already witnessed a change.

“There’s this great energy that participating in POWER has sparked,” he said. “It’s helped people to think bigger. It’s just given us a way to think how can we effect change on a bigger stage.”