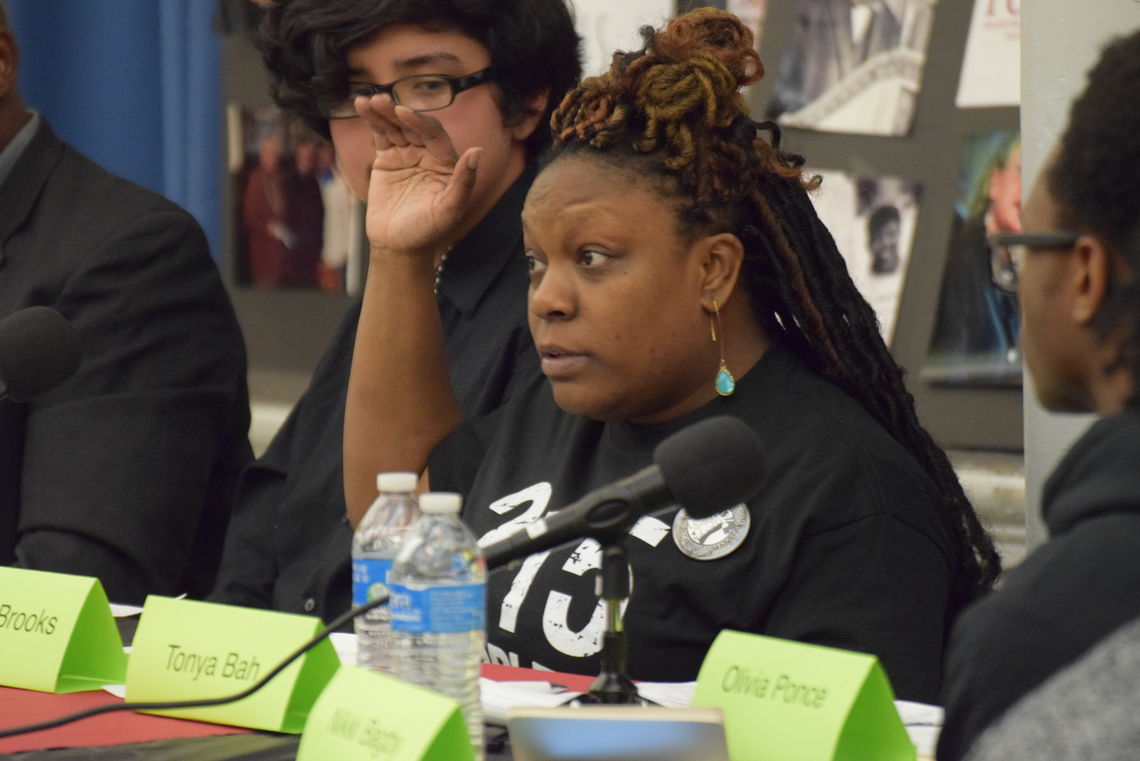 By POWER InterfaithFebruary 7, 2018No Comments

More than 2,000 people tuned in to watch the livestream of a town hall meeting Wednesday in which nearly all the members of the People’s School Board slate of candidates participated. They discussed problems that Philadelphia’s new school board will face, the kind of representation needed on the board, and what they would focus on if appointed by the mayor.

The People’s School Board is made up of parents, educators, and activists from various organizations that joined together last year to form the Our City Our Schools coalition to advocate for an end to the School Reform Commission. Many of those groups have been pressing to dissolve the SRC virtually since its creation by the state legislature in 2001.

After Mayor Kenney’s decision in the fall to move forward with local control, the coalition offered a slate of candidates to press for a nominating process that is transparent and considers grass-roots community members and direct District stakeholders, especially parents.

The event was held at Uncle Bobbie’s Cafe in Germantown, and “watch parties” assembled at other locations in the city.

One of the slate’s larger themes is inequity in resources and the shortchanging of city students.

“Tonight is about what’s next,” said Antione Little, a parent and central organizer for the coalition who is also on the People’s Board slate. Little has an older daughter who attended school in Warminster’s Centennial School District, he said, where “I was in awe, because the very first thing I saw was their state-of-the-art auditorium, where they could put an entire symphony. It had balconies and everything! They had a supermarket in the school. They had a Freedom Credit Union teaching financial responsibility.”

Because of disparities in state funding and what he later described as some “wasteful” spending by the SRC, he said, his son’s neighborhood school in Philadelphia doesn’t have the same resources.

“We have a makeshift library put together with some used books they found somewhere, joined classrooms, no gymnasium, and no counselor,” Little said. “Why are my children who attend school here in Philadelphia afforded a lesser education than my daughter who lives in Warminster?”

Little cited the District’s looming budget shortfall, which will balloon to $700 million in five years if the District doesn’t get more money from the city or state. Although everyone who spoke said they were outraged at the level of education aid allocated to Philadelphia by Harrisburg,  they largely acknowledged that the Republican-controlled legislature isn’t likely to provide up more funding, so the District will have to look to the city instead.

There, they looked at big institutions to contribute, including tax-exempt universities and corporations that, Little said, take advantage of tax loopholes and abatements.

“There are institutions like Penn, Drexel, Temple, Jefferson, Blue Cross, and the biggest culprit of them all is Comcast — they have got to pay their fair share,” he said.

His voice was lost in the crowd’s applause. Little was particularly outraged at the city’s 10-year real estate tax abatement, which he said can be used as a loophole by corporations to avoid paying real-estate taxes and disproportionately benefits the wealthy

Kendra Brooks, an activist with Parents United, recently withdrew from the People’s Slate after being chosen for the Mayor’s Board of Education nominating panel. She cited mandatory school uniforms as an example of the kind of arbitrary policies that stigmatize working-class parents and shouldn’t exist at all.

“It’s not that I didn’t buy them a uniform, but if I have to be at work at 6 a.m. and my children have to be at school at 8 a.m., and I lay that uniform out on the bed — how many of y’all were teenagers and changed your clothes before you left the house?” she said, to laughs from the crowd as everyone raised their hands. “But if I work at McDonald’s, I can’t answer my phone on the front line. If I work at Victoria’s Secret, I can’t walk through the store answering a phone call about a uniform.”

She’s tired of the stigma, she said, which implies that parents whose kids show up without uniforms must not care as much about their children’s education.

“I care because I go to work every day to support them,” she said.

She added that the most important policy for the new school board to adopt is mandatory trauma-informed training “for every person in every school.”

Tonayia Coffer, a parent of children in public, private, and charter schools and a part of the Fox Chase Home & School Association, spoke about the need to increase the accountability for charters. She said that many charters with poor academic records attract students by marketing themselves as “safe,” but don’t explain that they can remove students through “harsh discipline policies” and send them back to their neighborhood school. “That’s how they keep them safe.

“Accountability would benefit not only traditional neighborhood schools, but charter schools too,” Coffer said. “I believe there should be a freeze on the rapid charter expansion. This protects us. Starving public schools while expanding charters would be irresponsible and detrimental to our students.”

Edgar Villegas, a freshman at the High School for the Creative & Performing Arts (CAPA), wants to be appointed to the non-voting student representative seat. The child of undocumented parents from Mexico, he joined the Latino immigrant rights organization Juntos when he was 13 and was involved in organizing to keep open his neighborhood school, Vare Washington.

“As an 8th grader … we only had one counselor, and she only came a few times a week, but she had to help over 60 students,” Villegas said. She was “constantly stressed and overworked. We didn’t have the support we needed to apply [to high schools]. … If it weren’t for Juntos, I wouldn’t be at CAPA.”

Villegas said that students are needed on the board because they know best how to prioritize the resources needed at the school level.

“While we’re in need of counselors, the SRC prioritizes metal detectors and police in our schools.  We need to feel welcome, not like school is a prison,” he said. “I’m very lucky to have gotten into a special admission school … but we all deserve a school that’s properly funded, and I believe that every child, regardless of income, deserves the best education.”

Tonya Bah is an activist with several organizations, as well as the Home & School President for Widener Memorial School, and the SAC facilitator for Wagner Middle School. Bah has twins who are autistic and is a longtime advocate for the rights of the special needs community. She has also worked with the opt-out movement that seeks to end or reduce the use of standardized testing.

“Education is about helping students to get to the point where they want to learn on their own, not just absorb material in front of them,” Bah said. “Education should not be about a person at McGraw-Hill making money off standardized tests.”

Bah said she would continue her activism if appointed to the school board, going so far as to say she wouldn’t take orders from any elected official even if it meant getting booted from the board.

“You’ll probably see me on the news, having just been kicked off, but I’m going to make sure the public knows what’s going on,” she said to a cheering crowd.

Olivia Ponse, an immigrant from Mexico whose son attends Central High School, gave her speech in English — a language she struggles with, causing problems for her when trying to communicate with school staff.

“Access to a language is not a privilege, it is a right,” she said, before describing how she has to arrange to have a District interpreter at meetings with teachers well in advance, and they aren’t available for emergencies. “If there’s an issue parents need to talk about with the teachers, we have to wait until the date that the interpreter is available. … Sometimes they are overbooked and we never get a chance to talk about the issue.”

Niki Bagby, on the advisory board of the Children’s Hospital of Philadelphia (CHOP), said that she just came from a meeting with that board and that CHOP was going to “approach the District about having enough interpreters.”

Bagby, whose children have attended Central High School and Imhotep Charter School, is a parent liaison for the District’s School Improvement Team, works as the marketing manager for United Healthcare Community Plan of Pennsylvania, and has been Home & School president for more than five years.

“My heart is to serve,” she said. “I believe that no matter what I do in the community, it’s my job to protect my children and our community against social detriments” that perpetuate poverty, such as homelessness, hunger, and illiteracy.

She also seemed to prefer an elected school board, or at least more community input into the process.

“It’s important that it’s our choice to pick the people that we want on this board. This is not an entitlement; this is something we deserve. I chose not to move out of the community that I grew up in,” said Bagby, who is from Nicetown. “Just because the economic status of my community doesn’t match that of Chestnut Hill doesn’t mean my kids don’t deserve the same education as those kids. We pay our taxes like everybody else.”

Sheila Armstrong spent the night in motion as she ran between speaking on the panel, managing her son as he helped serve food, and circulating among the audience to distribute literature and answer questions.

“I’m a fighting parent. Some people say that I’m a big-mouth parent,” Armstrong said. “One thing that I tell everybody in the city of Philadelphia and the state of Pennsylvania: When you do not properly educate my children, you are attacking me personally.”

Armstrong comes to the People’s School Boar slate through her work organizing for more education funding with the interfaith activist group POWER, and she is also a plaintiff in the state’s fair funding lawsuit.

“It’s budget season and election season. If we don’t see it in the budget, we’re gonna show them at election time.”