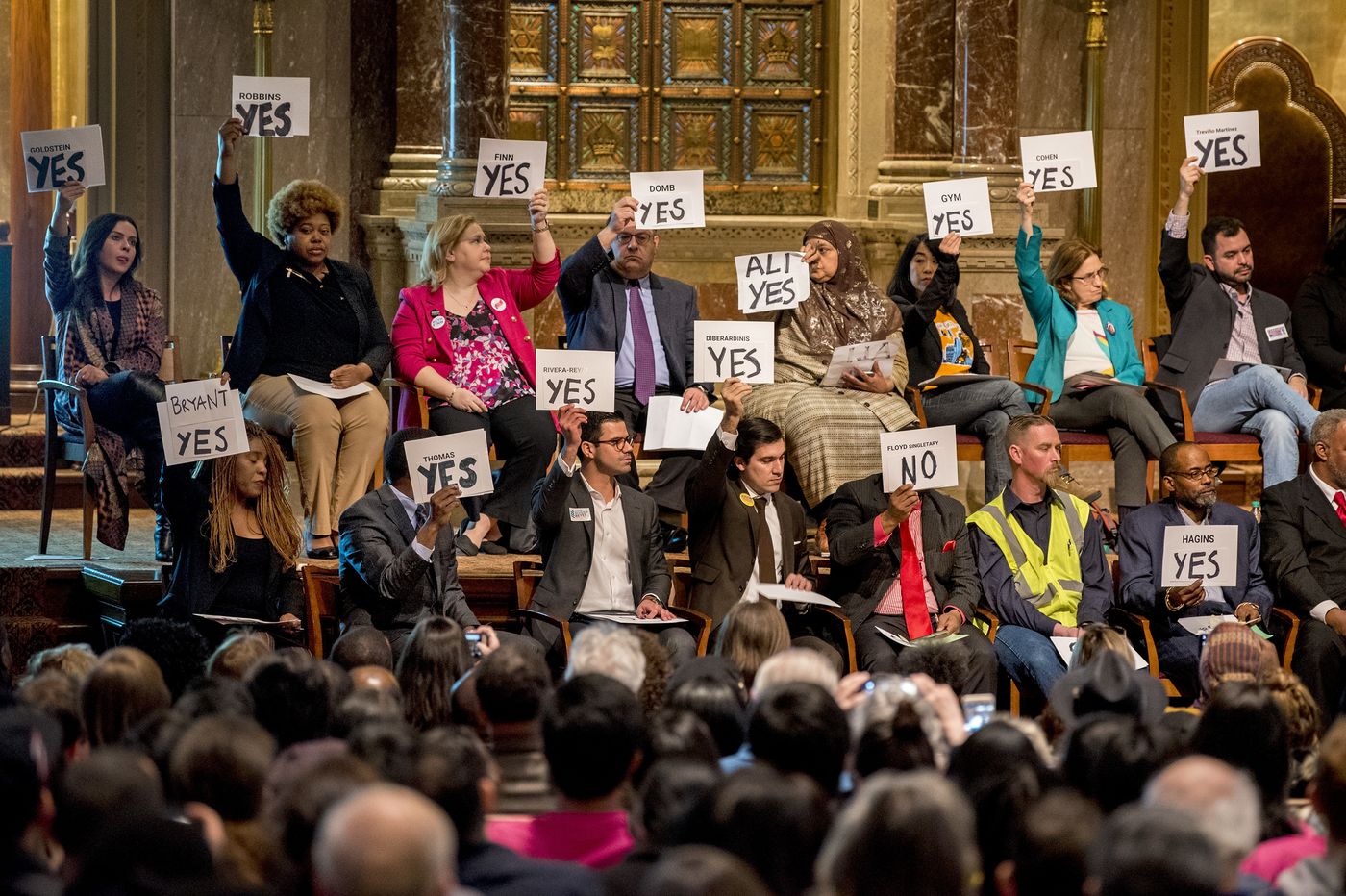 By POWER InterfaithMay 15, 2019No Comments

David Lipscomb, who said he’d been handcuffed during a traffic stop in South Philadelphia, called for an end to stop-and-frisk. Teresa Herrera, who said her son had been deported, called for stronger sanctuary city policies. Gus Grannan, who said he’d witnessed fatal overdoses of people afraid to seek help due to stigma surrounding addiction, called for the opening of supervised injection sites.

The three were among dozens of Philadelphians who spoke to about 1,000 attendees Sunday afternoon at Congregation Rodeph Shalom in Spring Garden at a so-called People’s Forum, which the Alliance for a Just Philadelphia and the MLK Dare coalition called the largest City Council candidate event of this election cycle.

“We believe the people who know best how to fix the problem are the ones who live closest to the pain,” said the Rev. Mark Kelly Tyler, pastor of Mother Bethel AME Church and a member of the activist clergy group POWER, who was one of the forum’s emcees.

Inside the synagogue’s ornate and cavernous sanctuary, questions were posed to 19 City Council at-large candidates to measure how well they lived up to a progressive policy agenda called the People’s Platform.

When Philadelphia voters take to the polls for the May 21 primary, they will be voting for the largest slate of at-large candidates since 1983. All 41 at-large candidates, who are running for seven spots, had been invited to attend, organizers said.

For two hours, candidates — 18 Democrats, including incumbents Helen Gym and Allan Domb, and one Republican, Irina Goldstein — answered policy questions by raising pieces of paper indicating “Yes” or “No.” Most candidates in attendance held similar views. Some questions garnered a unanimous response.

Each candidate was given one minute to elaborate on any answers or discuss a platform in detail.

Toddlers sat on their parents’ laps or roamed the aisles. Members of the same organizations sat together, many wearing matching shirts and some shouting, “Shame!” when candidates’ views didn’t match the policies they favored.

“We continue to see development is happening just fine,” said Antoine Little of 215 People’s Alliance, to rousing applause. “The time for the 10-year tax abatement is over.”

Some in the audience said they were encouraged that candidates shared their views, but wanted to learn more about their positions.

Max Ray-Riek, 35, of Southwest Philadelphia, said that the forum might not change how he votes in the primary, but that he enjoyed learning a bit more about Council candidates with whom he wasn’t previously familiar.

“It was definitely really clear to me Allan Domb didn’t agree with many of the issues I cared about,” said Ray-Riek, a member of the AIDS activist organization ACT-UP.

With little time for candidates to expound on their platforms, La Salle University student Natalia Munive said, she was drawn to the ones who seemed most personable during their one-minute speeches.

During the question portion, “I think that everyone said yes to things, which doesn’t really leave room for what they actually plan on doing,” said Munive, 19, a Colombia native and member of Youth United for Change. But “it was good to see they were all progressive.”

She added: “The questions were a little, like, ‘Are you a good person?’”

Organizers said they were encouraged by the turnout and audience engagement.

During his closing remarks, Tyler addressed the standing-room-only crowd: “Let me just say: Philly is lit because of the people like you in this room.”