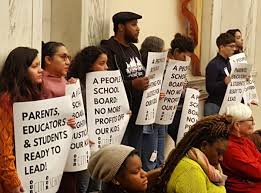 By POWER InterfaithMarch 1, 2018No Comments

PHILADELPHIA — Today, Thursday, March 1, Mayor Kenney made his budget address before City Council. In his plans to close the budget gap facing the Philadelphia schools in the next year, he announced a 6% increase in the property tax, a 8.5% increase in the real estate tax, and a reduction in the rollback of the wage tax.

“We’re glad that our Mayor is stepping up to solve yet another budget deficit in our schools, but we demand that the Mayor and City Council do not balance this deficit on the backs of poor and working people. Our elected leaders must not, yet again, bend to the will of the wealthy and elite that all too often get their way. We need them to do their job and protect the majority of our city who are already struggling with increased housing costs and the Trump tax scam. We are unified in our belief that there can be no property tax that hits low-income and working Philadelphians when the wealthy of our city — corporations, developers and universities — have yet to pay their fair share to our schools. Increasing property taxes, while allowing the ten year tax abatement program to continue for example, is simply unjust. Why do developers and wealthy property owners get tax breaks while working people see their property taxes go up year after year? We have seen what this does in other cities when people of color and poor people are displaced — we say: not in our city!

The Our City Our Schools coalition has put together a funding proposal that will generate over $200 million for our schools every year — not only fixing the deficit but also allowing us to start to envision the schools our kids deserve. Our coalition, which is made up of hundreds of parents, students and community leaders, demand that developers like Brandywine, corporations like Comcast and mega non-profits like University of Pennsylvania stop hoarding wealth and power and pay up.

The Our City Our Schools funding proposal includes: ending the 10 year tax abatement, negotiating PILOTS with universities and other large nonprofits, raising the use and occupancy and stopping the roll back of the wage and business privilege tax. We’re also calling for a full audit of the District to ensure our money is spent well and a feasibility study for a public bank to address the District’s the giant Wall Street payments.”

The Our City Our Schools equitable funding proposal calls on the Mayor and City Council to:
Abolish the 10-year tax abatement program for properties assessed at $500,000 or above.
Negotiate with major tax-exempt institutions — like universities and nonprofits that hold property valued at more than $15 million — to pay 50 percent of what they would if they were fully taxed. (They currently pay zero percent.)
Postpone the proposed cuts to the Business Income and Receipts Tax (BIRT) scheduled over the next five years.
Postpone the proposed cuts in the wage tax scheduled over the next five years and help working people by implementing a low-wage tax credit program.
Increase the Use and Occupancy Tax by raising the overall rate to 1.5 percent while raising the exemption amount to shield small businesses.

The two cost-cutting measures propose as part of the Our City Our Schools proposal:
Undertake an independent forensic, managerial, and performance audit to ensure every School District program is cost-effective.
Fund a feasibility study on a public bank that could address the School District’s more than $300 million in annual debt service payments.