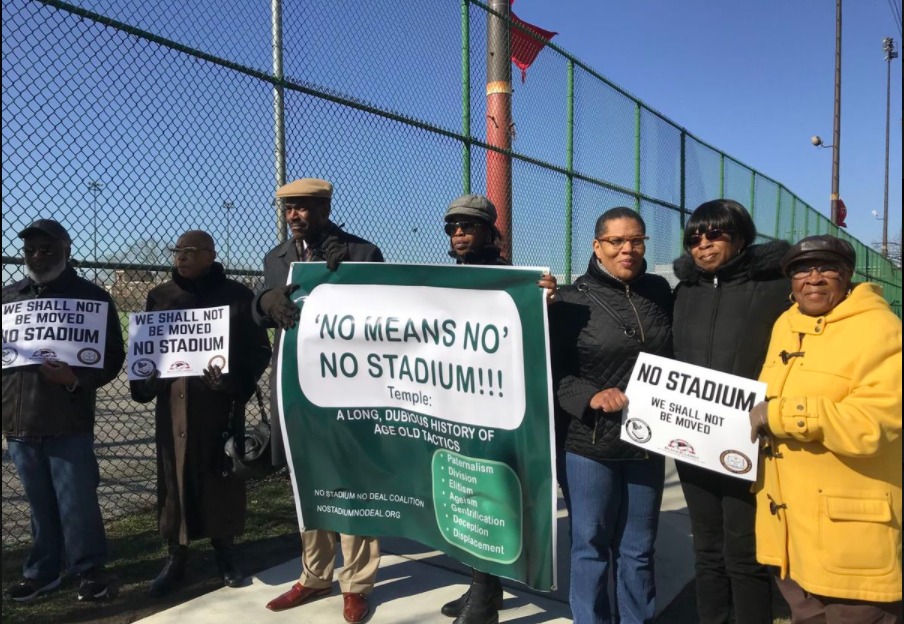 By POWER InterfaithMarch 28, 2018No Comments

When resident Gail Loney looks around her North Philadelphia neighborhood, she sees a building bonanza of luxury apartments and new developments.

But that growth has been fueled by Temple University for its students at the expense of homeowners and lifelong residents like herself, she said.

Now as Temple embarks on its proposal to build a $130 million football stadium at Norris and Broad streets, Loney said residents are fed up and pushing back.

“It’s about [Temple] taking over the neighborhood and not including the people who actually live here,” Loney said. “Everything being built in this neighborhood is mostly being geared toward students. There’s no low-income housing.”

On Monday, Loney added her voice to a growing cluster of community groups and residents united against the stadium.

Members of the The Black Clergy of Philadelphia and Vicinity; the interfaith coalition Philadelphians Organized to Witness Empower and Rebuild (POWER); the community group Stadium Stompers; and the Philadelphia Chapter of the NAACP stood alongside residents near Geasey Field, at 15th and Norris streets where the project is proposed, to denounce the plan.

“This is unacceptable and we’re not standing for it,” Birchett said. “We will not permit this to be built. … We’re saying: No stadium in North Philadelphia.”

Temple has proposed the 35,000-seat multi-purpose stadium on an area bounded by 16th Street to west, Broad Street to the east, Norris Street to the north, and Berks Street to the south. The stadium’s footprint would be partially located on Geasey Field, which is an artificial turf athletic field.

Temple owns the entire area where the stadium is proposed, which will be primarily funded by private donations and bonds, according to the university’s website.

The university also has proposed closing 15th Street between Norris Street and Montgomery Avenue, which would require city approval.

As cars and trucks rolled loudly along the narrow corridor of Norris Street which was lined with residential row houses on one side and Temple’s property on the other, the coalition group that consisted of more than a dozen people chanted “We shall not be moved,” and held a signs, some of which that read: “No Means No. No Stadium!!!”

The Rev. William Brawner accused Temple University of attempting to push through the stadium proposal with no public support and little community outreach.

When asked whether the community would ever support a stadium, Brawner bluntly said: “There is no compromise.”

“There’s no stadium. There’s no deal. And we won’t not be moved,” Brawner said.

Any promise of good paying jobs for the community generated by the stadium is a lie, Brawner added.

“Don’t be fooled and be lied to by Temple, who has traditionally lied to this community for years, and years and years,” he said.

Raymond Betzner, university spokesperson, said Temple will “continue to engage with our neighbors in conversations concerning the benefits of this project during small scale community meetings.”

Although the construction and operation of the stadium will create jobs, Betzner said it was too early to give specifics.

“Until proposal is set, it’s difficult for us to make those kinds of commitments,” Betzner said.

But when it comes to job creation, Betzner said the university has responded to the community with its North Philadelphia Workforce Initiative, which offers career development programs for local residents to secure jobs that pay sustainable wages. The initiative, funded through a $512,000 grant, will do more for the area than the stadium.

“That’s what’s going to make a difference in North Philadelphia, as far as jobs are concerned,” Betzner said. “If you’re really interested in jobs, if that’s really what your concern is, that’s where you’d ought to be focusing right now. We never said that this [stadium] proposal was here as a jobs-creation proposal.”

Temple currently is discussing the proposal with the city’s Planning Commission, Betzner said. No plan has been officially submitted to the city as the university continues to alter portions of the project in response to residents’ concerns, he said.

Among those at the rally was Marsha Thrower, who lives in the Diamond Park apartment building across the street from the proposed stadium and who has been a vocal opponent of the stadium in the past. Diamond Park, which is owned by Partnership For Urban Housing Development, is a rental housing facility for upwards of two dozen senior citizens and disabled individuals.

Thrower, who is disabled and in a wheelchair, said Temple has not taken into account how the stadium will affect those in the housing facility.

“They don’t have to consider the fact that, like I said, a lot of people in this building are disabled. … They don’t care,” Thrower said, referring to Temple.

Natasha Simpkins, a property manager for the Diamond House, said Temple has not courted the housing facility’s owners to buy the building or the other one it owns at 17th Street and Susquehanna Avenue.

“Temple has not contacted the owners of Diamond Park concerning a purchase of any one of those properties,” Simpkins said in a telephone conversation. “No one has approached them.”

In early March, a town hall organized by Temple to discuss the project was shut down by opposition groups, who shouted over Temple President Richard Englert as he attempted to speak.

In addition to the stadium, the university has proposed building a facility to provide early learning, mental health, dental, and job training resources for the community as well as research and training opportunities for students at 13th and Diamond streets. Temple also has pitched a plan to a yet-to-be completed library available to the community.