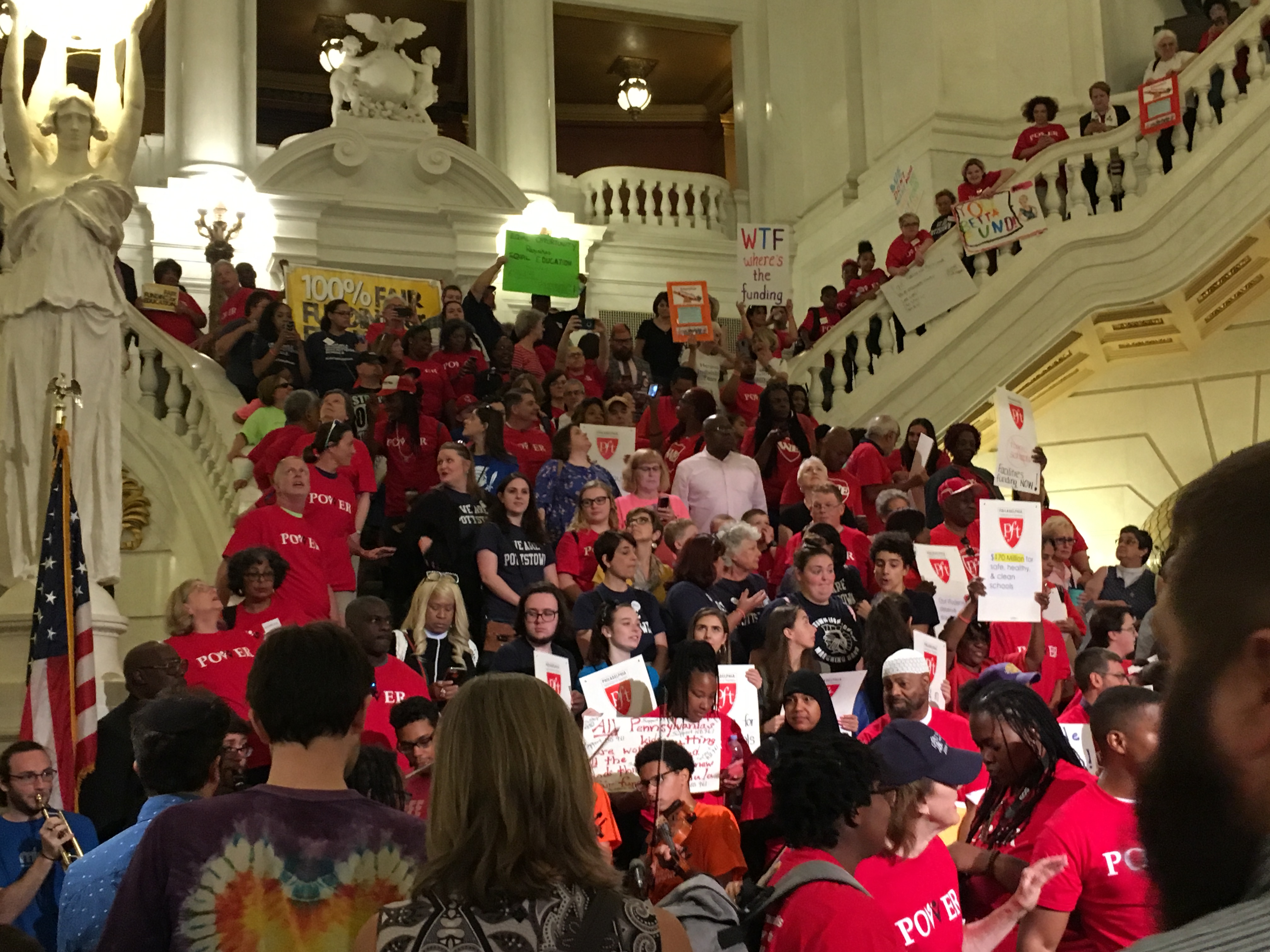 By POWER InterfaithJune 26, 2019No Comments

The Rev. Phyllis Harris of Mount Pisgah A.M.E. Church in Philadelphia volunteers in a kindergarten class at Alain Locke Elementary School every Thursday. She has a passion for education and was one of the leaders of the Rally for Fair Funding on Wednesday in Harrisburg.

“We’re all here in God’s eyes, so we should get equal funding,” she said.

“I believe that this [inequitable funding] is the new form of systematic chains. … The new plantation here is education.”

More than 1,000 people traveled to the state capital Wednesday to rally for fair funding of public schools. The legislature in 2015 approved a formula that would distribute state education aid more equitably by weighing such factors as student poverty rates, local taxing capacity, and property wealth. But then lawmakers only applied the formula to increases in the budget, as opposed to the total amount. A new bill, the 100% Fair Funding Bill, HB 961, has been proposed to allot 100% of the education budget in accordance with the formula.

Philadelphia resident James Solomon said a major reason why only a small portion of the $6 billion in aid is being distributed according to the formula is that the complete implementation would involve taking money away from some school districts to give to others.

“The distribution of money is based on political power now, not equity,” he said. “Only a small portion of the budget is based on equity.”

Adrian Un teaches martial arts in many different schools, including in Philadelphia. He came to the rally to take photos and to support the movement. Un noted the disparities he sees in the schools where he works, ranging from resources to building quality to available equipment.

“The way education is funded is unjust in Pennsylvania and the U.S., and is not sustainable,” Un said.

“I hope we as a collective can draw attention to what’s going on and remind everyone that [equal funding]’s still a pressing issue, that we shouldn’t just accept it, and it’s something that needs to be acted upon.”

Alice Roscoe-Brown, a retired educator, was there with Kathleen Williams and Louise Moss as members of the Calvary St. Augustine Episcopal Church in Philadelphia.

“Tears come to my eyes when I see schools who have money and schools who don’t have the money and the materials to support their students,” Roscoe-Brown said.

Williams and Moss agreed. “It’s very important that they not only see us but also hear us,” Moss said. “It’s not easy; it never is.”

On a bus from West Philly, Harris thanked everyone for coming and explained the event before beginning a prayer and leading the bus in singing, “We Shall Overcome,” replacing the word someday with today.

As buses from all over the state dropped people off in Harrisburg, ralliers started gathering inside the Capitol building. Chants started filling the rotunda with sound, along with music played by a student band.

As people came in, speakers shared their beliefs on the matter of education and the bill. In between the speakers, clergy members – ministers, rabbis, teachers, and imans – stepped up and led the crowd in song and prayer. One of the songs was written by a teacher and her students and called, “Make America Great, Not the Land of Hate.”

“Tell your representatives of Harrisburg to stop doing the wrong stuff. It’s about time they did the right thing,” the Rev. Gregory Holston, executive director of POWER, said to cheers and applause. POWER, which organized the rally, is a group of Philadelphia religious congregations that have come together to make equitable school funding one of their leading moral issues.

“Is it fair in some districts a building administrator needs to choose between a counselor, a librarian, and a school nurse?” asked State Rep. Thomas Murt (R-Montgomery County).

“How do we justify sending God’s children to schools that are not fit for anyone?” he asked.

Hughes also cited an $850 million budget surplus in Harrisburg. Next year, he said, it will increase to a billion dollars and rise again the following year.

A parent from Pottstown, Laura Johnson, spoke about how that district now receives $13 million less than it would if all revenue were distributed through the fair funding formula. Pottstown gets $4,000 less per student than needed, she said.

“The lawmakers know that school funding is racially biased,” Johnson said. “[And yet] many allow the funding to compound year after year because they say it is not politically possible to do anything about it.”

Analyses have shown that districts with more students of color get less state aid per student than equally poor districts that are predominantly white.

Johnson also noted that Pottstown struggles with one of the highest local tax burdens. In addition to the state money not being distributed equitably, Pennsylvania’s overall contribution to education spending, compared to the local share, is one of the lowest in the country, forcing local taxpayers to bear more of the cost.

Legislators and policymakers who don’t correct this are not doing their job, she said.

Students shared their experiences regarding the quality of school food, as well as clean and accessible facilities.

“I know that the color of my skin or the neighborhood I live in should not affect my education – but it does,” said Miracle Farley, a rising 4th grader from Philadelphia.

After the speakers, the crowd dispersed to thank the representatives who co-sponsored the bill and ask others to support it. The rally-goers left small tokens with a note to remind representatives about their cause. Because the House of Representatives was in recess at the time, many of the ralliers had to leave these tokens with staff.

In the meantime, crowds gathered outside in hallways and outside certain offices to chant, while teams of clergy members went into the offices of House leaders, specifically Speaker of the House Mike Turzai, the chairman of the House Education Committee Curt Sonney, and Democratic Minority Leader Frank Dermody.

“SHUT IT DOWN,” the crowd would respond.

Throughout the day, people watched the ralliers or came up and asked questions to hear more about their story. Some of the people working in the offices shook hands with protesters or gave them hugs as they were leaving. Turzai’s office, however, called the Capitol Police on the clergy members.

On the bus ride back, people reflected on the rally. Some appreciated being asked by bystanders about their cause. Others spoke about the need for better acoustics on the second floor. Still others were just glad that they could attend and have their voices heard. People spoke about next-step actions, how to continue the campaign, and a follow-up discussion that POWER will be hosting on June 25.

As people were leaving the bus, Harris reflected on her own experiences in education. She spoke about how her schools could not afford new textbooks, so she had to use old, outdated ones. She was shocked, she said, at seeing a college student with a brand-new textbook.

“We faced the same thing 50 years ago,” Harris said, shaking her head. “We didn’t get fair funding then, either.”