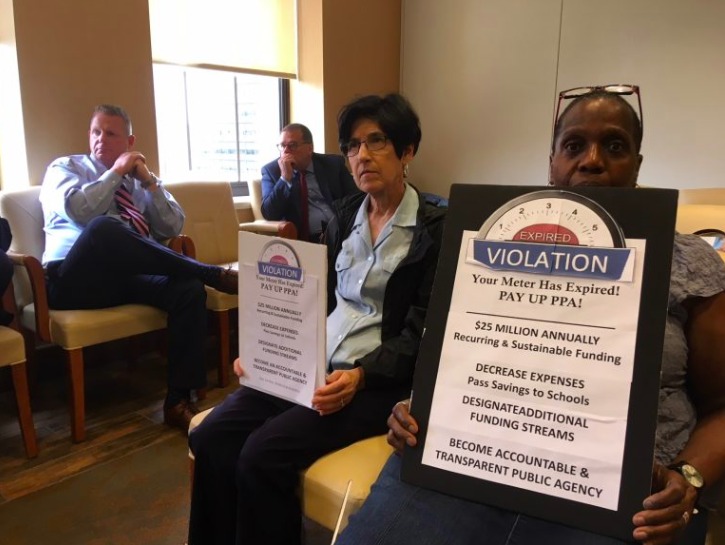 This story originally appeared on PlanPhilly.

Why does the Philadelphia Parking Authority exist?

This isn’t just the lament of drivers filled with the kind of rage that can only be engendered by the discovery of a PPA envelope slipped under the windshield wipers.

It’s a question on which Parking Authority officials and education-funding advocates fundamentally differ, which is why the authority’s board and upper management sat through another tongue-lashing Tuesday from educators and parents upset at how much — or how little — the School District of Philadelphia receives from on-street parking revenues.

“What does the PPA exist for?” asked Thomas Quinn, who teaches civics at Central High School. “If the PPA was created to help fund schools to educate kids in the poorest big city in the country, then your job is every bit as important as mine because I can’t do what I do without a properly funded school system.”

Quinn spoke as a Philadelphia Federation of Teachers member and supporter of Pay Up PPA, a coalition of progressive groups seeking a commitment of $25 million a year from the Parking Authority for Philly’s public schools. “Twenty-five million dollars that the [Pay Up] PPA coalition is asking would pay for 227 librarians, enough for almost every school in the district,” said Quinn.

“We are a business designed to provide a connection between where they were and where they’re going. The parking spot is never the final destination — it’s something else. It’s a doctor’s appointment, it’s business, it’s tourism,” said Petri. “We work with other city transportation entities to ensure that people can get to their destination and to provide fair enforcement to the street and to ensure that the vital economic concerns of Philadelphia are addressed.”

“We only have a school purpose because the legislature and City Council have decided that, which is fine,” Petri added. “If that’s where they want funds to go, then we will provide as much as we can as best as we can within the purview.”

As for the $25 million that the education-funding advocates say the school district was promised, PPA spokesman Martin O’Rourke said that refers to a pledge made by lawmakers when the state took over the Parking Authority in 2001. But, according to O’Rourke, the deal struck by then-Mayor John Street, then-Gov. Ed Rendell and Republican state legislators inserted the City of Philadelphia between PPA’s revenues and the School District, giving the first $25 million in on-street net revenues to the city treasury. That amount was later increased to $35 million, plus an additional amount based on the prior year’s gross revenues. Last year, per PPA’s unaudited data, the Parking Authority sent $38.3 million to the city and $13.2 million to the school district from on-street parking operations.

Petri said that he would gladly send more of the PPA’s revenues to the city’s schools, but that he is constrained by the state law. At a recent joint hearing of the state House Urban Affairs and Transportation Committees, the idea of flipping the funding formula was raised, Petri said. Instead of the city’s getting paid first, the schools would.

“That’s perfectly appropriate,” he said. “If that’s what City Council and the school district want to do, we’re entirely supportive. I thought it was a great idea, very creative.”

The Pay Up PPA advocates also called on the authority to reduce overhead, arguing that top executives were overpaid and too plentiful. “The Philadelphia Parking Authority is a top-heavy organization,” said Rochelle Nichols-Solomon of POWER, an interfaith progressive advocacy organization.

Petri said the authority has hired an independent consultant to perform a review of management-payment practices at the PPA, as compared to other government entities.

Petri bristled at that. “I don’t think we could be any more transparent,” he said. “The board minutes are all online, so are all the salaries, so are all the other information that they complained about — it’s all public information online, as it should be.”

In the year and a half since a sexual-harassment scandal forced the ouster of then-Executive Director Vince Fenerty, the PPA board has authorized a number of transparency and hiring reforms initiated by Petri and interim Executive Director Clarena Tolson. PPA operations were audited in 2017 by Pennsylvania Auditor General Eugene DePasquale, and City Controller Rebecca Rhynhart announced another audit earlier this month.

Year-to-date financials presented at Tuesday’s meeting suggest the changes are already paying dividends. For the first two months of this fiscal year, gross revenues are up $4.2 million compared to the same period last year, a 9.4 percent increase. That includes a $3 million increase in on-street parking gross revenues, from $22.7 million at the start of 2017 to $25.7 million at the start of the current year. After expenses, on-street parking operations have netted $11.6 million so far this year, compared to $9.4 million last year, a $2.2 million increase. The PPA sends its net revenues — essentially, operating profits — from on-street parking to the city treasury and the school district.

Despite the positive trends, instituted reforms, and promises to support legislative efforts to redistribute revenues, the educational advocates remain unswayed. The $25 million they are demanding may not be a huge part of the school district’s $3.2 billion budget. But after decades of the city’s schools doing with far less than their suburban peers, the PPA’s explanations and pledges fell on deaf ears.

During the public comment period, Eleanor Walker had just one thing to say to the PPA board.

“The kids in Philadelphia in some schools don’t even have books. This is a systemic racist system that we’re still living in,” said Walker. “I’m 77 years old, and I don’t think it’s ever going to end.”