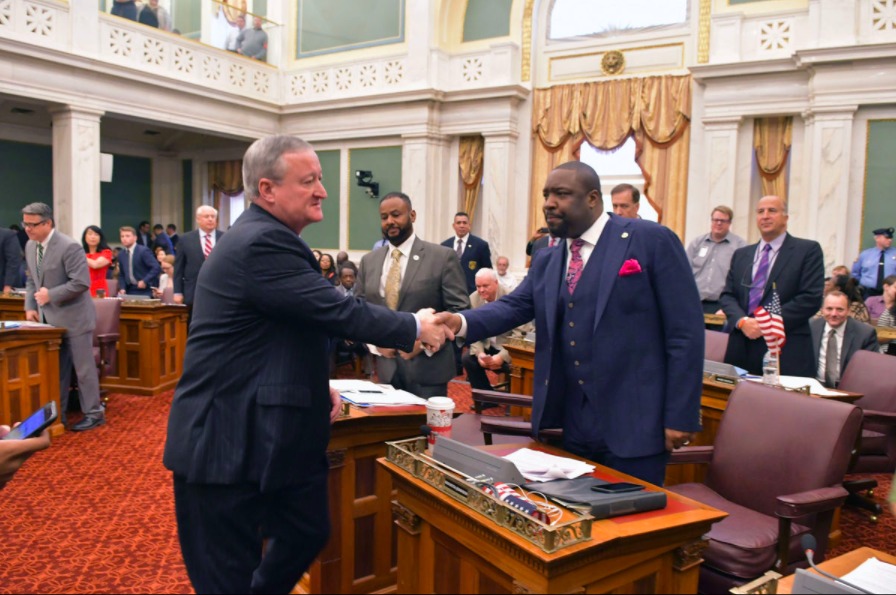 City Council was packed Thursday morning as Mayor Jim Kenney asked members of the School Reform Commission to vote to dissolve and return to local control at its Nov. 16 meeting.

“After nearly two years of careful consideration and research, 98 school visits, and conversations with 158 school principals and countless parents, teachers, and business leaders, I am officially calling on the members of the School Reform Commission to vote to dissolve at their next scheduled meeting,” Kenney said.

Upon disbanding, the current five-member board will be replaced with nine-members recommended to Kenney by a nominating panel. The panel will be comprised of 13 Philadelphians, including four members of the public-at-large, as well as nine leaders of organizations, whose institutions support the public good cause of the city.

“When the nominating panel is in place later this year, we will begin to take recommendations and applications for individuals interested in serving on the Board of Education,” Kenney said. “We will select the members of the school board with one goal in mind: ensuring every child has access to quality schools, no matter where they live, or what they look like.”

The SRC was established in 2001, after the School District of Philadelphia was called distressed for failing to adopt a budget and had failed or would fail to provide an educational program in compliance with the Public School Code, the State Board of Education and standards of the Secretary of Education.

It is made of five volunteer commissioners, three appointed by the governor and two by the mayor.

SRC Chair Joyce Wilkerson said a resolution will be forthcoming. It asks Secretary of Education Pedro Rivera to dissolve the SRC by June 30, 2018, adding that the district is no longer distressed, and no longer requires governance.

“As a result of this progress and stability, we have the opportunity to reexamine the governance structure including the restoration of local control,” she said in a statement. “Strong public education is the most significant factor in the welfare of our city and the future of our children. It is time for Philadelphia to take ownership of that future.”

Kendra Brooks, of the Our City Our Schools Coalition, which has fought to end the SRC, said an elected school board is ultimately what the city deserves.

“There were too many people on the SRC who had an invested interest, not a vested interest,” said Brooks, who has children in public schools. “It’s time out for this 16 year experiment that they had on our city, on the backs of our Black and brown kids.”

Philadelphia Federation of Teachers President Jerry Jordan, called Kenney’s announcement “significant and exciting,” but also recognized that local control in itself is no solution for deep poverty.

“We must continue the fight for more resources from the state to combat the effects of poverty and provide our children with the programs and services they deserve,” said Jordan in a statement. “The PFT feels that a locally accountable school board will make a stronger ally in this fight.”

Moving forward, stability and putting children first is key, Kenney said, noting the district has had three superintendents in the last 15 years.

In 2013, the SDP closed down more than 20 public schools and laid off employees in an effort to fill a budget deficit. Additionally, full-time nurses and counselors were cut. Teachers went five years without a contract.

“Over the last several years, the district has had to make hundreds of millions of cuts,” Kenney said. “Children lost months of valuable education time — setting them back in test scores and, more importantly, in life.”

Collaboration between the city and school district has been one of the mayor’s key platforms. Through the passage of the sweetened beverage tax, there has been an expansion of quality pre-K programs and the development of community schools.

“Local control will multiply these benefits because we will now be working under one common vision — with the full support of the city’s departments and resources behind the district,” Kenney said. “Specifically, we can improve the ways in which school facilities are made available for community use during non-school hours.”

In his next budget meeting, Kenney will propose investments that include: a capital improvement program to address building needs; a 9th grade academy to provide academic support and counseling in order to decrease the drop out rate; modernize career and technical education programs; expanding college access through free PSA and SAT testing as well as more advanced placement classes; hiring reading coaches; equipping K-3 grade classrooms with libraries; and increasing bilingual counseling assistants and filing all teacher vacancies. It was not specified how the improvements will be paid for.

Superintendent William Hite said he will continue to advocate for resources that improve academic outcomes and is optimistic about the future of the district.

“Our priorities remain the same,” he said in a statement. “We are focused on early literacy efforts, preparing students for college and career, recruiting and retaining great talent, and maintaining financial stability. Our work will make sure that all students in Philadelphia have a great school close to where they live in.”

Sheila Armstrong, a community organizer of Philadelphians Organized to Witness, Empower and Rebuild (POWER), an interfaith organization committed to bettering communities, said she hopes the changeover includes a task force.

“I hope a task force is created to ensure that everyone’s voices is heard from parents to teachers and students,” she said. “Our belief is that they are the experts, because they are in the schools every day and in the classrooms.”

“I trust Philadelphians, more than I trust the state legislators to do right by our children, that’s why I support this,” he said. “For people who think this is a panacea, they’re in for a rude awakening.”