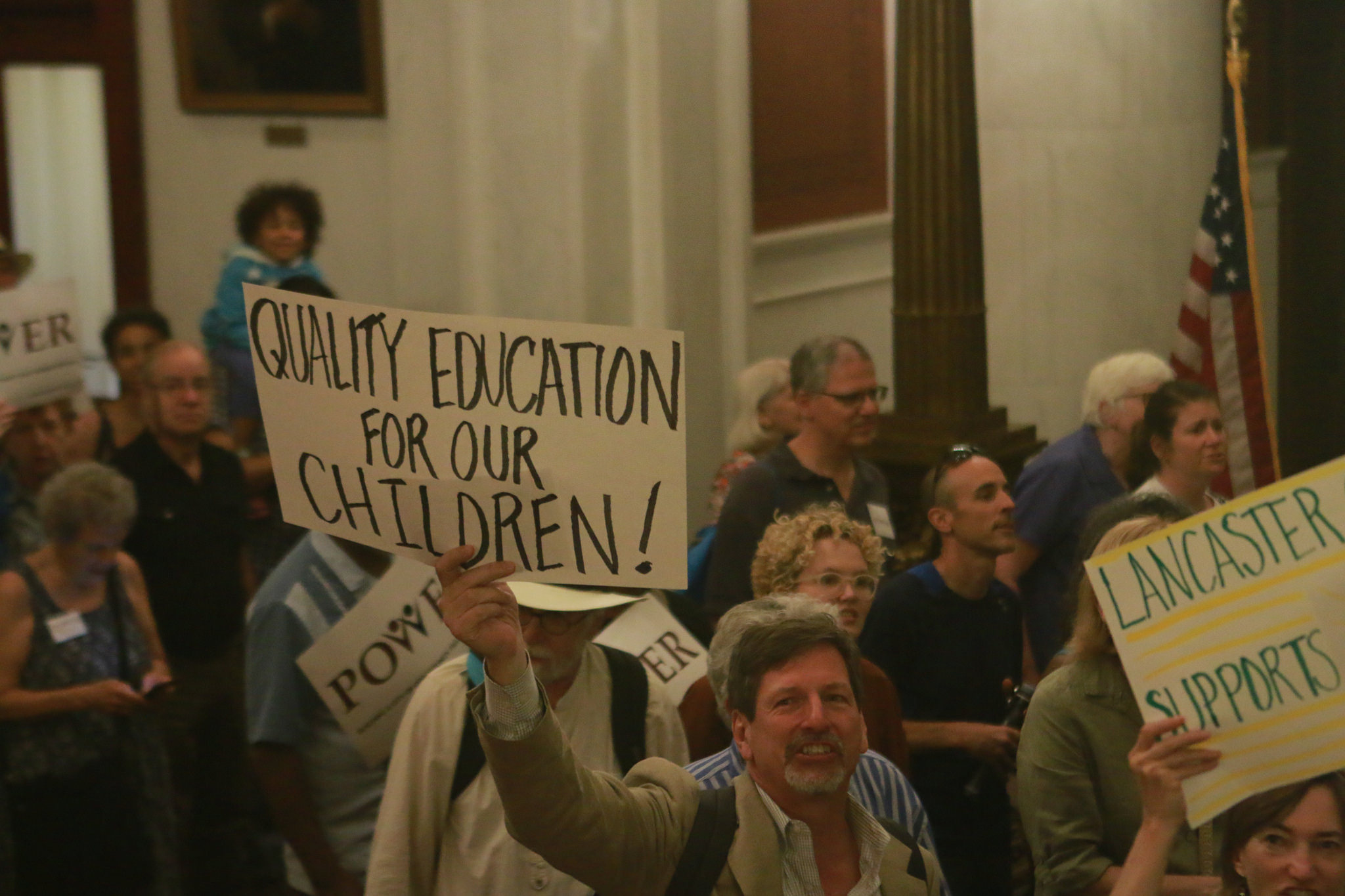 By POWER InterfaithJuly 16, 2018No Comments

City officials, representatives, experts and residents weighed in on Gov. Tom Wolf’s recent announcement at a press conference held at Roosevelt Elementary School in Germantown to give $7.6 million toward a $15.6 million emergency cleanup to remove asbestos, lead, mold and other environmental hazards from 57 District schools.

The Commonwealth is providing the $7.6 million for lead paint remediation at 40 schools in the city, and the district is investing $8 million to remove lead paint, mold and asbestos.

“The safety of our children should always be a priority, and our schools must be healthy environments where students and teachers can focus on learning and building bright futures,” said Governor Wolf in a statement.

State Rep. Chris Rabb said the grant is “a good first step toward ensuring students in the School District of Philadelphia are protected from harmful toxins that can have lasting effects. Moving forward, it will require an intentional and well-coordinated effort to bring all stakeholders together who are directly impacted by these dangerous pollutants.”

He said that in order to address this public health issues, all stakeholders must have a seat “at the table from teachers, staff and students to parents and other advocates.” Rabb added that he applauded Gov. Wolf for “echoing” his push for equitable education funding.

“Only until we guarantee that 100 percent of state funds are allocated through the fair funding formula established in 2015 with unanimous bipartisan support can we end educational apartheid in our state that prevents all kids from achieving the success they so richly deserve regardless of their ZIP code.”

While many city officials, state representatives, and professional experts praised Wolf’s announcement, advocates and parents worried that without adequate external oversight, the district would “botch” the job.

David Masur, executive director of PennEnvironment and a spokesman for Philly Healthy Schools Initiative, said more money for addressing lead paint is great, “but as the Inquirer Series shows in their article “Botched Jobs” if there isn’t adequate oversight, involvement of stakeholders and outside expertise, often the district does the work incorrectly or hires contractors who do it incorrectly.

“I think that is the big challenge here,” he said. “If you are spending millions of dollars to solve an important problem, you want to make sure that problem is properly addressed and that money isn’t wasted. And I think their [the district] track record has shown that can only happen if experts from outside the district are involved and there is transparency. It’s unclear whether that will happen with this project or not.”

Mt. Airy resident Robin Roberts, a parent of a child with special needs and a member of the Philly Healthy Schools Initiative, said there is “no transparency with the district.”

She said despite several attempts by the Philly Healthy Schools Initiative to work out some agreements with the district in regard to transparency and stakeholder involvement, district officials refused to work toward any progress.

“There is no clear accountability towards prioritization for any of these projects,” she said. “There are over a hundred elementary schools that were open prior to 1978 and are very likely to have lead-based paint needing remediation. The district has a track record of doing poor work, not adhering to industrial standards, poor clean up. There is nothing to believe that this rush set of abatements will be anything different. They are putting the youngest, most vulnerable children at risk. They know it and are not changing their actions.”

Rev. Jarrett Kerbel, rector of Church of St. Martin-in-the-Fields, a founding member of Philadelphians Organized to Witness Empower, and Rebuild (POWER), a faith-based community organizing project that seeks to create positive structural and policy changes for the benefit of the most vulnerable members of our communities, said he has “a lot of faith in the new school board.”

“The lead issue is just too important to the safety of our children,” he said. “I am excited that we are going to get this issue fixed. We are going to have healthy classrooms for kids to learn in.”

Kerbel said this is “a great opportunity” for the new school board “to lead and put new [best] practices in place. He commended Wolf for “taking leadership” to restore basic education funds.

“I am excited because it was only a week and a half ago that POWER was advocating for that change,” he said. “I feel like we have been heard. Over 500 hundred people came to Harrisburg to rally in the rotunda.”

Councilwoman Cindy Bass said that in order to ensure that the work “meets or exceeds environmental standards” it requires City Council “to pay close attention to what is being addressed – how and by whom.”

Bass said City Council will be requesting and reviewing all documentation – “not only for what is done but a timely plan for all sites.”

She added that “alternative options for schools with environmental issues must be included as well,” and that her office “is offering the PSD suggestions on how to address the possible temporary relocation of students in the likelihood that some schools may not be ready in September.”

Recently, City Councilman Mark Squilla introduced new legislation that will set best practices for identifying, removing, and cleaning up crumbling lead paint in city schools; mandate that school district officials inform parents and school workers prior to doing lead removal, as well as all testing results and protocols being used; and set timelines that will help solve the problem quickly and reduce the threat posed to the health of children and others in school buildings.

At the earliest, City Council could take up the legislation in the fall, after the summer recess.