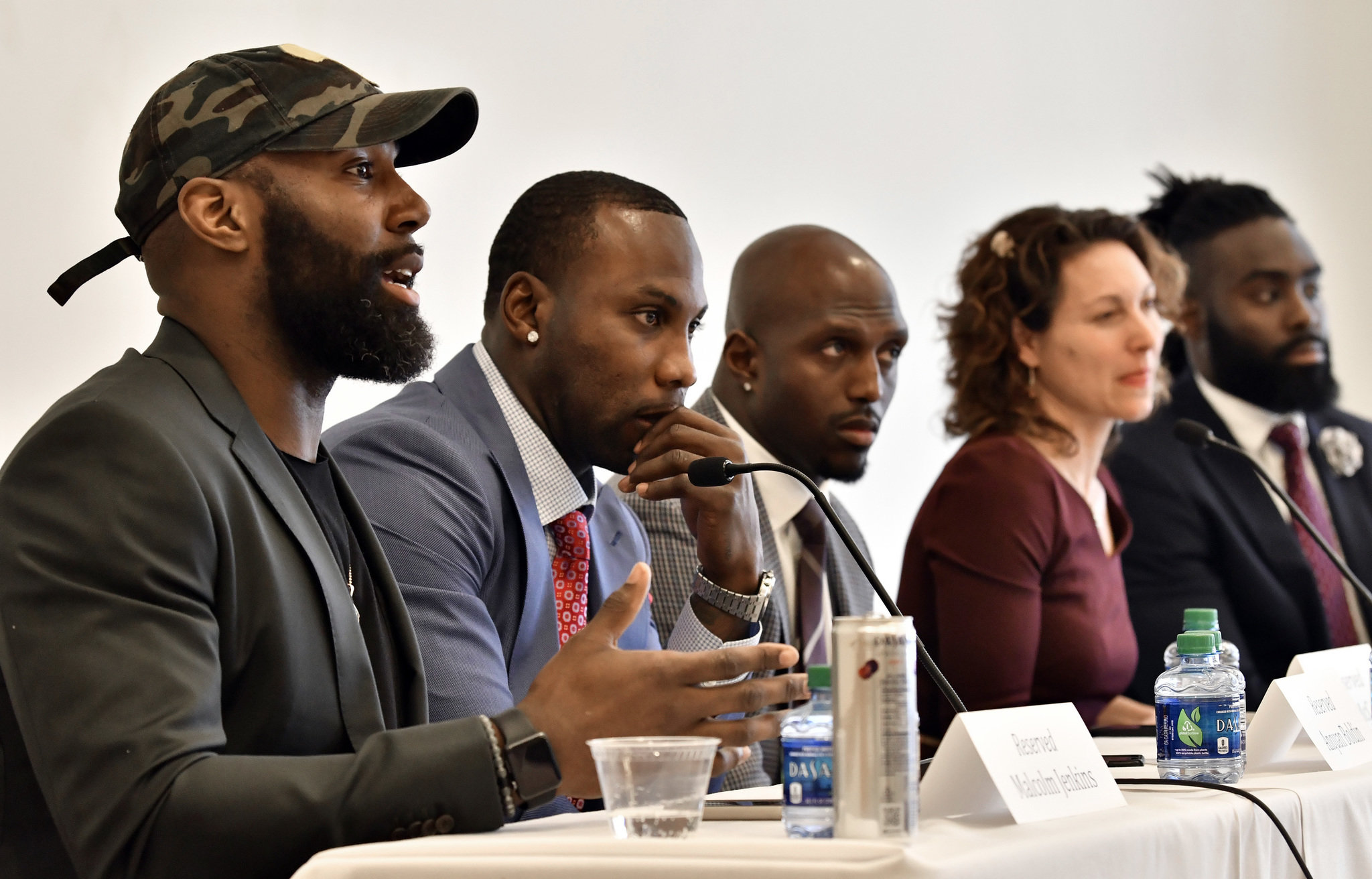 Language of the Unheard

By POWER InterfaithJune 8, 2018No Comments

Home » Language of the Unheard

“I think we’ve got to understand that a riot is the language of the unheard.” -Dr. Martin L. King

It’s been three days since Donald Trump called off the Philadelphia Eagles visit to The White House because so few players wanted to go. In a tweet from June 4th, the President states, “The Philadelphia Eagles Football Team was invited to the White House. Unfortunately, only a small number of players decided to come, and we canceled the event. Staying in the Locker Room for the playing of our National Anthem is as disrespectful to our country as kneeling. Sorry!”

But earlier this week, something interesting happened. Philadelphia Eagles Safety and noted social justice advocate Malcolm Jenkins, during a locker room interview surrounded by reporters, kept vocally silent during an onslaught of questions centered around the rescinded invitation and patriotism. Instead of audibly speaking, Jenkins pulled out handwritten signs, reminiscent of street protests to communicate.

“More than 60% of people in prison are people of color” read one sign,

“In 2018 439 people shot and killed by police (thus far)” was one of the more brutal realities Jenkins shared with the reporters.

Several startling truths written on signs were lifted up by Jenkins throughout the course of the encounter when, at a certain point, one of the reporters actually asked if Jenkins was going to speak or if he was just going to pull signs the whole time. To which he reached down and pulled up one more sign that read in big bold letters,

As has been proven in the last three days, despite the President’s intentionally inaccurate (lying) explanation for the rescinded invite connecting it to kneeling during the National Anthem, no Eagles players knelt during the Anthem in the last season. The lack of interest in attending the event was linked to the reason Malcolm Jenkins chose not to speak to reporters in the locker room. Despite the wide reaction to protests by those literally pushing for a ‘more perfect’ union, supposedly “patriotic” decision-makers are in fact NOT listening and consistently demonstrate a lack of interest in the first place. The President’s clear commitment to injustice is a willful distancing from the cries of the Americans he professes to put first, under the guise of a narrowly defined and white rural-centered “Patriotism.”

Though the President is committed to his own created narrative about disrespect of the flag as the fundamental reason for protests demonstrated by NFL Players last season, the players have been very clear from the beginning about what their intentions are: To highlight the failure of our country to protect people of color from police-involved shootings and the various other social injustices. That has been very clearly stated more times than necessary, and the only reason anyone else, including the President, can arrive to a different conclusion about the purpose of these protests is if they are doing what Malcolm so clearly proved: Not listening.

When politicians aren’t listening the people aren’t being heard.

In a conversation with a reporter during the 60’s, Dr. King stated, “I contend that the cry of Black Power is at bottom a reaction to the reluctance of white power to make the kind of changes necessary to make justice a reality for the negro.” Bringing his point to a head he lifted up a truism that remains relevant today, “I think we’ve got to recognize that a riot is the language of the unheard.” The context surrounding the rescinded Eagles invite proves again the attempt of the oppressed to make clear their need for justice and the oppressors’ commitment to not listen, but instead, to silence the voices that call for the righteous treatment of and dealings with God’s people.

When the people speak out about the problems they face, they are unheard.

When they shout, they are unheard.

When the march, they are unheard.

When the cry, they are unheard.

When they protest they are unheard.

When they literally spell it out on cardboard signs, they are ignored and unheard.

The consequences of consistently being ignored and unheard as the President has done with NFL protests hurts those of us who experience and feel the pain we speak out about and it may seem to narrow the options of what to do next. But what Jenkins chose to do in the locker room reveals to us what we are all still called to do. In spite of the deafness of the self-proclaimed patriots, the sacred fight to make real justice in our communities must continue.

While I do not advocate for rioting on principle, I understand and believe in the need for necessary uprisings for the causes that literally mean life or death for people of color and all those who suffer oppression in this country. Though players like Long, Kaepernick, and Jenkins have larger platforms to draw attention to the issues present in our communities, they are not separate from us on these issues. We are all included together in these just causes for criminal justice reform, gun violence reduction, decarceration, and the expansion of police accountability. Understanding that organization is the engine of political power, the only difference between lovers of justice and those who currently occupy the seats of power is that they are currently more organized than we are.

This does not have to be. We must organize ourselves for the realization of justice, with the same vigor and intentionality as those who are committed to the silence of our voices. We must organize because criminal justice reform is too serious an issue to have to beg leaders just to hear us. We must hear us. We must care for us. We must love us enough to continue the fight in spite of those who stand against us. By continuing to live into our calling we are living out part of what it means to be “Beloved Community,” and by being Beloved Community we are demonstrating for the world how God would have us all to live. Where the riotous language of the unheard is made manifest by community transformation driven by Love for all of Gods people.