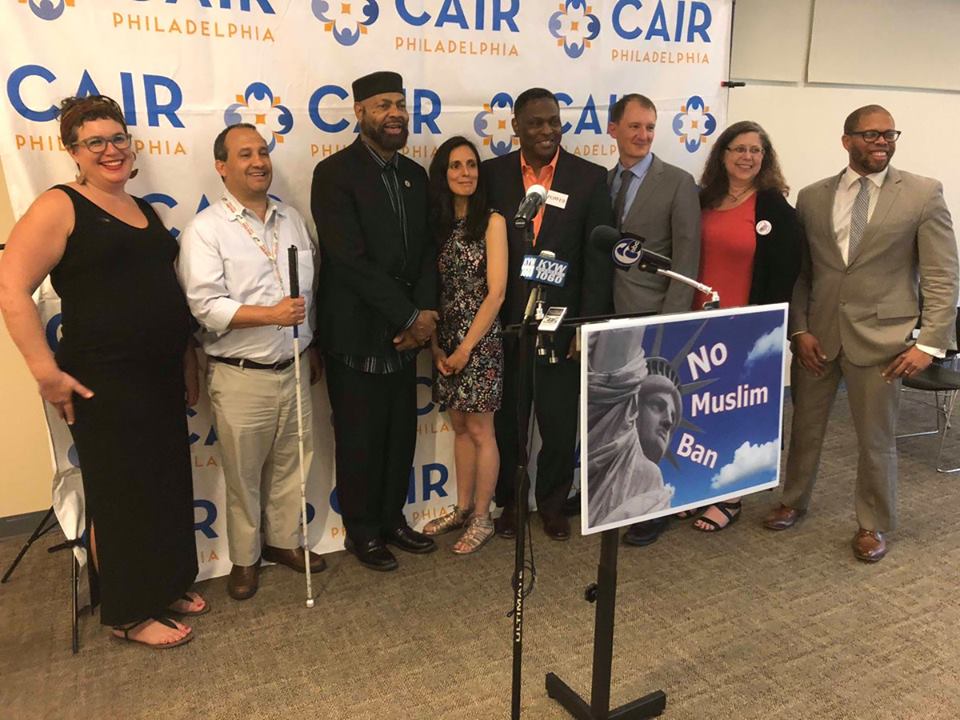 By POWER InterfaithJune 27, 2018No Comments

Philadelphia leaders of faith gathered on Tuesday after the U.S. Supreme Court’s decision upholding the travel ban on citizens of Muslim-majority countries to decry the decision as a legal advancement of white nationalism, bigotry and xenophobia.

“We are a country of law,” said Kenneth Nurridin, imam of the Philadelphia Masjid, said at a gathering hosted by the CAIR (Council on American-Islamic Relations) Philadelphia chapter, before quoting the Declaration of Independence. “The basis for that law begins ‘We the people.’ It doesn’t say we the white people, it doesn’t say we the Christian people, we the Jewish people, we the Muslim people, we the black people — it says we the people of the United States. … This is the premise that every office-holder stands on.”

While religious persecution is blatantly unconstitutional, and would violate the First Amendment, the Supreme Court’s decision sided with President Donald Trump’s order, now known as a “travel ban,” which restricts travel into the U.S. by citizens of mostly Muslim-majority countries, and also including countries Chad, Venezuela and North Korea.

But Trump famously introduced the idea for a ban on Muslims while campaigning for president in December 2015, days after a Muslim couple of Pakistani descent killed 14 people in a shooting in San Bernardino, California. At the time, Trump called for “a total and complete shutdown of Muslims entering the United States until our country’s representatives can figure out what is going on.” But Trump later tweaked the message, altering the policy to block people from Muslim-majority nations, before expanding it to other nations, ostensibly based on their lax visa protocols.

“The Supreme Court has made a mistake. It’s a terrible mistake,” said Thomas Earle, executive director of the Philadelphia Commission on Human Relations, at CAIR-Philadelphia’s meeting. “Today, we are blemished. We are blemished because the Supreme Court is allowing discrimination on the basis of religious animus to be a factor in excluding humans from our country. … It’s an example of terrible white nationalism that is ripping our country apart.”

“This never was an issue of religious or racial bias, contrary to arguments by his opponents,” said Dan Stein, president of the Federation for American Immigration Reform. “This temporary pause in immigration to the United States from dangerous regions of the world gives our government time to correct longstanding and mounting loopholes in the admissions process. This order reduces current risks and assures heightened national security moving forward.”

But Philly leaders disagreed, calling the order a clear sign of religious and racial discrimination. Many called on the public to ask elected officials to push to change the laws that allowed this ban to take effect.

“This White House practices and believes in a philosophy of white nationalism,” said Rev. Gregory Holston, executive director of the interfaith social justice organization POWER (Philadelphians Organized to Witness, Empower, and Rebuild). “All of our faiths stand together against this Muslim ban. And we will fight and we will fight. We say to all people, are you willing to take up the standard and fight yourself?”

A protest is planned starting at Logan Square at 19th and the Ben Franklin Parkway at 11 a.m. of Trump’s immigration policies under which parents and children are separated at the border, which is expected to include protests of the travel ban.