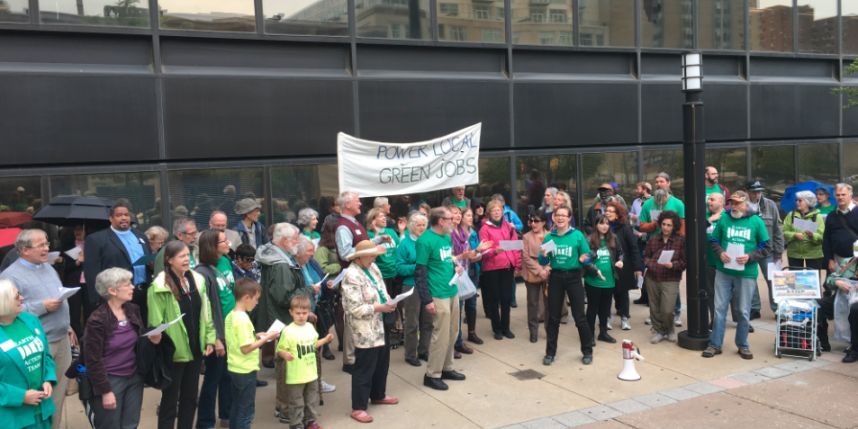 By POWER InterfaithMay 11, 2016No Comments

Roughly 150 people gathered at PECO’s West Philadelphia front gates Tuesday to demand the energy company expand its services to explore solar power, which they say could come from local rooftops and create upwards of 10,000 new jobs across the Delaware Valley.

Assembling beneath a 25-foot map of the five-county region, the group of clergy members, Quakers, and young and old activists gathered with bullhorns and signs to ask PECO to provide 20 percent of its electricity from local rooftop solar farms by the year 2025.

“For such a slow company, we think this is in their best interest to catch up on the green economy,” said Greg Holt, a member of Earth Quaker Action Team (EQAT) and Philadelphians Organized to Witness, Empower, and Rebuild (POWER).

“PECO needs pressure to face present reality…In general, utility execs know the old business model has to change, and see solar as a major part of the future.”

Ultimately, the activists groups are calling for PECO to create jobs in high unemployment areas, beginning in North and West Philadelphia.