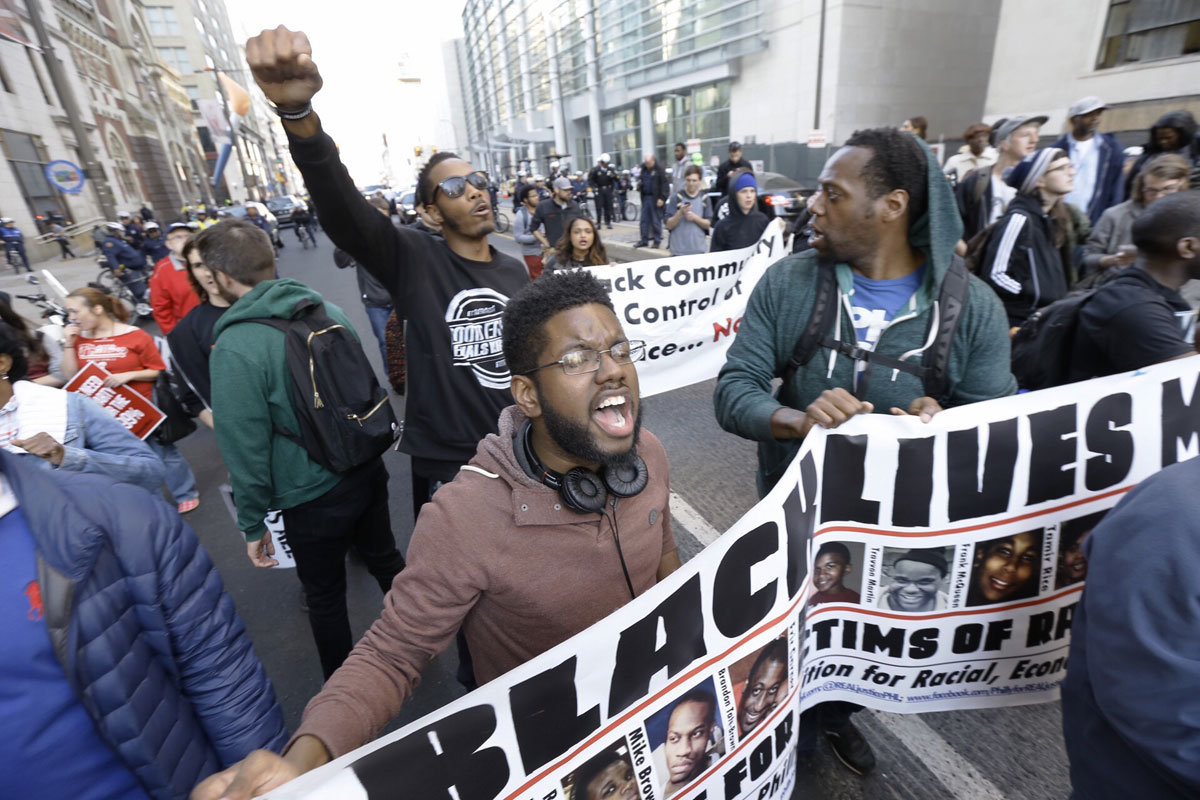 By POWER InterfaithApril 17, 2016No Comments

As the evening rush of motorists descended upon Center City on Thursday evening, protesters from varying movements joined together for a large-scale “Day of Action” march to bring attention to their many causes.

The marchers – including a few hundred activists seeking a national $15-an-hour minimum wage, a halt to a proposed stadium for Temple University, and an end to racial injustice – snaked down North Broad Street all the way to City Hall, where they stopped traffic for more than an hour.

“It’s about disruption,” he said.

It all began about 2 p.m. near Temple, where demonstrators protesting a planned football stadium in North Philadelphia – holding signs that read, “Shut It Down,” “Up With the Community,” and “Down With the Stadium” – were joined by those seeking improved wages. Together, they made their way down Broad for a rendezvous two hours later at the McDonald’s restaurant at Girard Avenue with protesters calling for an end to stop-and-frisk, police violence, and other social and racial injustices.

There, the group called for “economic justice” and union rights for fast-food workers before again heading south.

By then a couple of hundred strong, including drummers and dancers and others who held a large “Black Lives Matter” banner, the group marched to and around City Hall before returning to Broad and Arch.

Setting up outside a McDonald’s there, the throng held a prolonged demonstration, with calls for action and speeches that focused on the varied agendas.

Throughout the march, demonstrators shouted and shared their issues.

Francis Elling of Fairmount was angry with stop-and-frisk and Mayor Kenney.

“It’s only happening, pretty much, to minorities and poor people,” he said of the police crime-prevention tactic. “I’m really mad at Kenney for backing down. He ran saying he was going to stop stop-and-frisk, and now he’s backing off.”

Another demonstrator, a 20-year-old junior studying neuroscience who wanted to be identified only as Ian, said that although he lives in Yardley and commutes to campus, he is against the stadium and its impact on North Philadelphia.

It would “displace community members,” he said. “Paramount, because it’s a racist program designed against native North Philadelphians.”

Royster said the different groups striving under one umbrella had the same goal: To grab the attention of political and business leaders, and push them to put the needs of the community before their business interests.

“We’re all fighting for the same thing in different ways,” he said, “economic justice.”

Chief Inspector Joseph Sullivan said there was a lack of communication about how far south the marchers were going to go – whether they had planned to make it all the way to City Hall.

“I don’t want to get anybody in trouble,” he said. “As we were going along, they gave us indications of what they wanted to do,” not beforehand.

“We got it as three separate protests, but we kind of assumed that they would at some point merge,” Sullivan said.

He said there were no arrests, and no incidents were reported.