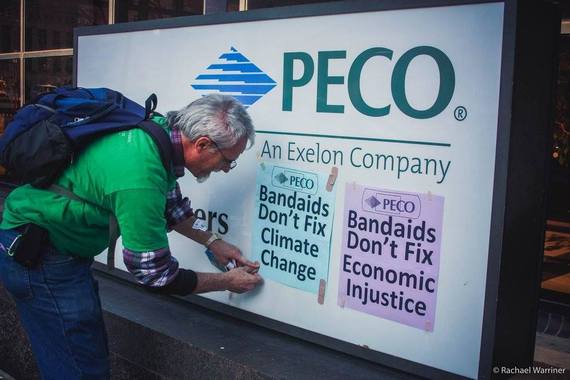 How to Move a Utility: Get Moving Yourself

Home » How to Move a Utility: Get Moving Yourself

Last week, Pennsylvania’s largest utility, PECO, floated some possible pilot projects to increase solar in its service area over the coming years. If all are enacted, the projects, could double the amount of solar energy PECO delivers. So why are green jobs activists, like myself, planning to do laps around the utility’s Philadelphia headquarters in a protest called the PECO Runaround?

First, doubling its solar only sounds impressive if you don’t realize what a miniscule amount PECO currently procures: 0.25% of its electricity, the state minimum. That means these programs, if all are enacted, would move the utility towards half of one percent solar, doing relatively little to reduce climate change causing emissions, especially from natural gas.

In contrast, the Power Local Green Jobs Campaign is calling for 20% local solar by 2025, prioritizing rooftops in neighborhoods hardest hit by unemployment and divestment. These are the same communities hit hardest by fossil fuel hazards, like high asthma rates, as well as climate change risks, such as rising temperatures and extreme weather. In addition to mitigating climate chaos, a major shift to solar could bring a variety of economic benefits to southeastern PA, as New York state is finding as it moves toward 50% of its electricity from renewable sources by 2030.

We are heartened that PECO’s potential pilot projects include access for low-income people and could create hundreds of short-term jobs. Clearly the utility is feeling the pressure of our year-long grassroots campaign. However, there are no indications that PECO is ready to move away from natural gas and make the kind of major commitment to solar that could spur thousands of jobs and long-term sources of community wealth. In fact, given its history, it seems likely the company is hoping to get us off its back with as little action as possible.

Consider how PECO has been giving Pennsylvania the runaround on solar for years:

In other words, PECO has actively made it more difficult for its customers to go solar, despite plenty of evidence that its current rate structure does not account for all the ways solar adds more value to the entire system, even benefitting the utility, especially when correctly deployed.

This lobbying, stalling, and road-blocking has had a disastrous effect on the local solar industry. PA currently ranks 40th in the country in per-capita solar jobs. My own solar installer tells me he doesn’t work in southeastern Pennsylvania much any more, instead driving to New Jersey, or even five hours to Ithaca, NY, for work.

That’s why we started this campaign under the banner Power Local Green Jobs. The two lead organizations—Earth Quaker Action Team (EQAT) and Philadelphians Organized to Witness Empower and Rebuild (POWER)—are working together for a moral economy on a livable planet. In the past year, we have had sixteen creative actions, which included: 75 people dancing the Electric Slide on PECO’s terrace to tell the company to “get moving” on solar; 150 people gathered on its terrace to map out our expansion across PECO’s service area; and since then, smaller actions at sites outside of Philadelphia, led by developing leaders who are now organizing across PECO’s footprint.

PECO is starting to pay attention. In addition to the new conceptual programs it is floating, the company is now meeting with frustrated solar contractors and promising to fix the second meter issue. The company also says it is planning to purchase its state-mandated 0.25% of solar locally, which could be a good start—if it really is a start. As Solar States founder Micah Gold-Markel told me at last week’s meeting with PECO, “These programs are like laying a few decorative tiles on a kitchen floor without fixing the foundation of the house.”

A major shift to solar will require PECO to change the way it does business, making solar an infrastructure priority rather than an inconvenient afterthought. Yet at last week’s meeting, when I asked PECO general council Romulo Diaz if the company would now put its considerable lobbying weight on the side of solar, the former lobbyist was noncommittal. That’s why we are continuing to take action and build pressure.

On Saturday, October 1, in a protest that is also a fundraiser, people of all ages will run, walk, and wheel around PECO’s corporate headquarters to let PECO CEO Craig Adams know that he cannot continue giving us the runaround on solar. The steps PECO is now taking need to be followed by many more, and not just baby steps, but bold leaps and bounds toward a just and sustainable energy economy. Until Adams shows this kind of leadership, we will stay on the move ourselves, building up the climate justice movement as we do.