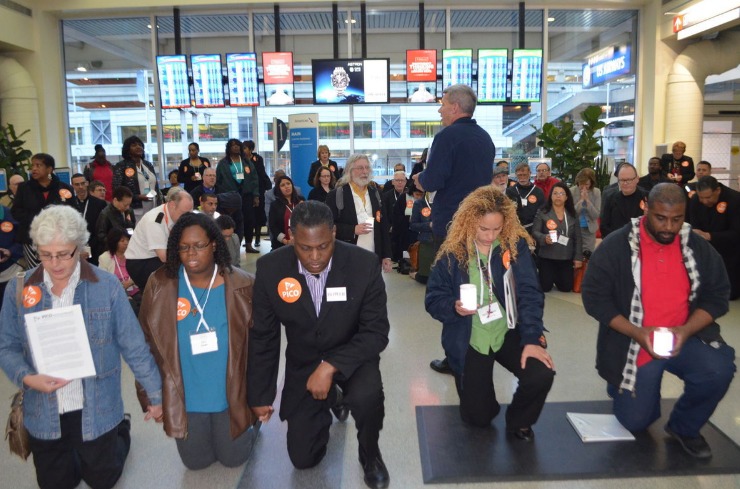 By POWER InterfaithJanuary 4, 2017No Comments

Philadelphians Organized to Empower Witness and Rebuild (POWER) has selected the Rev. Gregory Holston, Esq., as its new executive director.

Holston has been a POWER volunteer for five years, four of which were as leader of the Economic Dignity team. He plans to continue advocating for the issues POWER has traditionally taken up — living wages and fair funding of education included, but with some different strategies and a more powerful base.

“I’m thankful and honored that the folks I work with thought enough of my leadership,” said Holston. “It usually doesn’t work that way — it’s usually not the person that close.”

Even though Holston holds this view, several POWER clergy said his experience with the organization made him a prime candidate. Guided by Holston, POWER hosted a series of poverty hearings and a culminating summit earlier this year that recommended strategies to help Philadelphians out of poverty.

He also led the effort that resulted in a 2014 referendum passed by City Council to apply the living wage increase, which now stands at $12 an hour, “to all contracted and subcontracted workers.

He said, “this was a particular victory for airport workers, some of whom were making as little as $2 an hour” before the referendum was passed.

“We were looking for a prophetic leader who could inspire faithful action for a better world. He is extraordinarily rooted in the world of faith and the world of justice,” said Rabbi Julie Greenberg, of Congregation Leyv Ha — Ir ~ Heart of the City, and a POWER clergy member who served on the executive director search committee. “He had already been standing with POWER for five years, day in and day out as we worked for change in this city and region. [And] he really listens. He is committed to building a multi-faith and multi-racial coalition and that is huge. He understands the worlds of faith and of activism — the integration of faith in action.”

Holston said one goal is making POWER a stronger organization.

“The Nov. 8 election was a turning point for the entire world,” he said. “It pushes us at POWER to get bigger, better, stronger and faster in everything we do. We have to work at all levels — local, state and national to make sure the issues we care about and the principles we care about are lifted up and pushed forward, not being pushed back.”

The strategy to grow “bigger, better and faster,” he continued, is reaching out to the towns and rural areas that lie in the shadows of the city.

“We will begin to be a part of a coalition of faith groups across the state [and] we will be building to influence in a stronger way what happens at the state level with [school] funding and minimum wage,” said Holston. “We are in the process of hiring an organizer to reach out to people in the middle of the state, to speak to them about the concerns they have about fair wages and education for all.”

Holston added that, locally, POWER would continue to advocate for “the use of public funds to benefit the poorest in the community… and fair and just criminal justice where people are treated equally in terms of the law,” in addition to education funding and livable wages.

In response to proposed policies from the Trump administration, Holston named some national issues POWER plans to tackle.

“We are also going to [address] what the new administration is doing in Washington,” he said. “There are a variety of issues — the most dangerous is that in the [Paul] Ryan budget, which Trump supports, there’s a 30 to 50 percent cut in Medicaid proposed, which serves 78 million across the nation. One in three children born in this country — their expenses are paid by Medicaid, more so in poor communities. It destroys what’s left of the safety net, so we are going to be apart of resisting that at the federal level. We expect to be apart of these issues [and] the deportation of 11 million immigrants which is against our faith. Our faith tells us to love our neighbors and that’s not the right response. That’s not loving our neighbors.”

“[Holston’s] position will not only be good for our movement, but it will be good for all persons in the city of Philadelphia,” said Tyler. “He brings a true concern for the ‘least of these’ and works extremely hard to eliminate the root causes of economic injustice. My sense is that he will continue to strengthen the efforts that were initiated by his predecessor, Bishop Dwayne Royster. I suspect that he will continue to lead us as we endeavor to serve as lobbyists for the people who can’t afford lobbyists.”