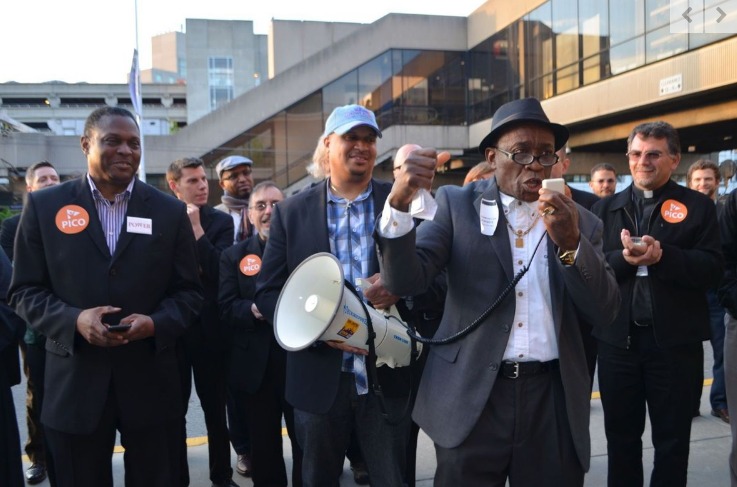 Calling themselves the “Reclaim MLK Coalition,” more than 30 community, religious, labor, student and environmental groups say they will observe this year’s Martin Luther King Jr. Day by “taking to the streets in the spirit of activism and resistance in which this great American tirelessly worked.”

The Rev. Greg Holston, pastor of New Vision United Methodist Church and leader of POWER, said, “Martin Luther King was not just a man of service. He was a man of action, a man of transformation and change.”

The observance will include a Martin Luther King Day of Action, Resistance and Empowerment (DARE) March that will step off from outside the President’s House at Sixth and Market, before moving on to the corner of Sixth and Lombard, in front of Mother Bethel African Methodist Episcopal Church and, for an unveiling of a 21st Century Declaration of Rights.

“With the new administration coming in, we thought it was important to talk about not what we’re against, but what we’re for,” Holston said.

The coalition first came together for a march in 2015 shortly after the police shootings in Ferguson. Several hundred people marched from Broad Street to Erie Avenue April 3 in a call for economic justice and an end to poverty.

The Rev. Mark Kelly Tyler, senior pastor of Mother Bethel A.M.E. Church and POWER member, said this year’s protest is a response to threats of rolling back progress made by previous presidential administrations.

“This march resists all threats coming to our community, whether it’s immigrant, Muslim, Black or LGBT,” Tyler said.

Climate justice will be featured for the first time at the DARE coalition march. Groups participating include the Food and Water Watch, an organization that focuses on corporations and government policies related to the food and water people consume.

“We really want to make the broader connection that racism and climate justice are not isolated events,” Tyler said.

The march will be held on the same day as the MLK Day of Service volunteering event. While organizers support the day of service, both Tyler and Holston stress the importance of recognizing King was also a man of action.

“We believe some people want us to believe Dr. King was about service. But he was also a prophetic voice,” Tyler said. “He refused to wait.”

He pointed out similarities in the efforts of the march and in the plan first crafted 200 years ago at Mother Bethel A.M.E. Church, which hosted the largest gathering of free Blacks in 1817, for a meeting that helped thwart a plan by the American Colonization Society to deport all free Black people from America.

“Both starting and ending locations are significant in their own way,” Tyler said. “Both speak to past struggle and current struggle, and connects us to it.”

Holston said the march will be the beginning of 100 days of faithful resistance, paralleling the first 100 days of President-elect Donald Trump’s administration. Organizers are planning training sessions on nonviolent action and the understanding of how policies are influenced by corporations.

“We are organizing a movement for justice in our city and beyond,” Holston said.

Tyler said he wants the march to inspire a fighting spirit within the community. After the election, he witnessed people feeling like there is nothing they could do to make an impact.

“Even if it looks overwhelming … we still have to fight,” Tyler said.

Information about the march is being spread on social media through the hashtag #ReclaimMLK. The MLK Dare Coalition also has an official Facebook page, reclaimmlk. Upcoming meetings related to march planning are available at powerinterfaith.org.