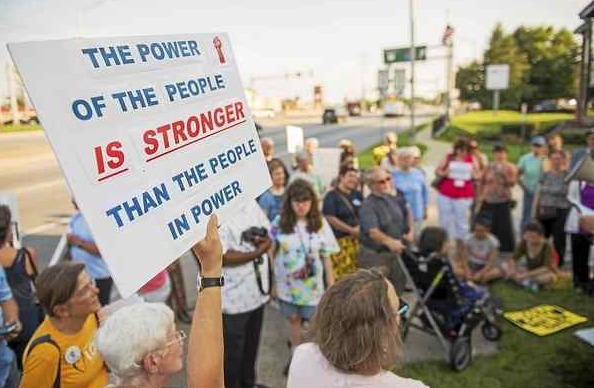 Group continues to press its support for Obamacare

Home » Group continues to press its support for Obamacare

SPRINGFIELD – Tuesday three Republican members of the U.S. Senate said they will oppose of a plan to abolish the Affordable Care Act — aka Obamacare — outright in a repeal-and-replace later scenario.

President Trump in response said his plan was to “let Obamacare fail” in lieu of a repeal-and-replace bill that failed in the Senate and now a repeal-without-replacement plan also failed.

However, for many who benefit from the ACA and Medicaid, who would suffer greatly and could face loss of coverage and even bankruptcy, failure is not an option.

“Without consistent and reliable source of funding, people like my son won’t be able to stay independent. He would wind up in an institution rather than being able to live independently or at home,” said Emily Fine, of Newlin Township in Chester County.

Her son was diagnosed with autism at age 2 and through employer-offered health care and Medicaid reimbursement offered him tutors who helped him pursue a degree at West Chester University.

She said cost for his tutors repays in dividends by giving him the tools to work and contribute to society.

Fine was among a few dozen concerned community members, clergy, Medicaid recipients and others who gathered outside the office of U.S. Rep. Pat Meehan, R-7 of Chadds Ford, Tuesday evening.

Rev. Greg Holston, the executive director of POWER — Philadelphians Organized to Witness, Empower and Rebuild — led a procession of speakers from the Peace Lutheran Church in Bensalem to the United Church of Christ in Levittown to Beth Am Israel in Penn Valley.

“We are Muslim, Jewish, Catholic, Baptist, we are African American, Latino, white. We are different races, backgrounds, creeds, histories, heritage, that have come together around the issue of health care,” Holston said. “It’s a universal issue, everyone in their lifetime has a health issue and has a need of health insurance no matter how rich or poor you are.”

Holston said the plan to repeal the ACA without a replacement was “simply an outrage.”

“Every American who has any concern for justice and fairness and equality needs to speak out and speak out now, not just for themselves, but for their families, their friends and their loved ones because we’re all affected,” he said.

Anne Kybert, who was born in Kent, England, and came to the United States in 2004 when she was 49 years old, said she was blown away to see people in the “richest country in the world” unable to afford medical care.

“People should be able to be treated without having to worry what the bill is going to be,” said Kybert, a Haverford resident. “That’s not to say we shouldn’t care what health care costs — obviously we need to address the costs. But people should not suffer because they’re unfortunate enough to be sick and to become poor as a consequence.”