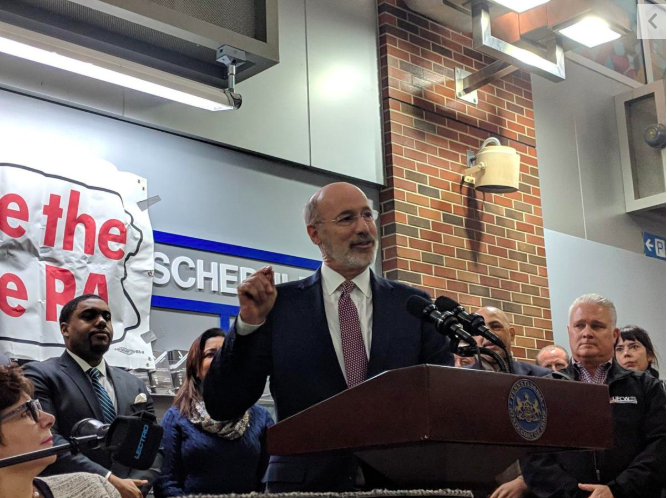 By POWER InterfaithMay 15, 2019No Comments

Gov. Tom Wolf took his campaign to increase the state’s minimum wage to $15 an hour to Northern Philadelphia on Friday.

Standing alongside Wolf was a clutch of Democratic state senators and representatives, as well as Mayor Jim Kenney and Councilwoman Maria Quiñones-Sánchez.

“The living wage of $15 an hour would literally change the lives of thousands of our residents,” Kenney said.

Wolf’s proposal initially would hike the minimum wage to $12 an hour, then annually increase the rate by 50 cents until it hits $15.

The governor’s plan would tie the minimum wage to an annually adjusted cost-of-living formula, which would theoretically increase the rate automatically each year without the need for state legislators to hash out new legislation.

The proposal also would eliminate the state’s tipped minimum wage, where workers like waitresses currently make $2.83 an hour plus tips. Pennsylvania’s tipped wage has remained unchanged for more than two decades.

Wolf said raising the state minimum wage would bring savings to the state, too. Many low-wage workers would no longer require public assistance, shedding hundreds of millions worth of annual benefit obligations from the state, he said.

“If you make $7.25 an hour, you qualify for a whole host of public assistance — local, state, and federal,” the governor said.

State legislation to increase the state’s minimum wage is expected to be introduced in the coming weeks.

Pennsylvania’s minimum wage, tied to the federal rate since 2009, lags behind all of its neighboring states. New Jersey recently passed legislation to raise its minimum wage to $15 an hour by 2024.

Democrats stood united inside the transportation center, saying increasing the rate would provide an economic boost to low-wage worker and lead to less employee turnover for businesses.

But Republicans control both state House of Representatives and Senate, who have scuttled past attempts to raise the minimum wage.

State Sen. Vincent Hughes, D-7, said public pressure on the GOP could lead to a bi-partisan solution. Hughes noted the state faced a similar political landscape in 2006 when state legislators, including the GOP-led Senate, hiked the wage to its current rate.

“We did it then; we’re going to do it again now,” Hughes said.

Freshman state Rep. Malcolm Kenyatta, D-181, said advocates must make a moral and economic case to raise the wage to the public and unconvinced state lawmakers.

“It’s economic stupidity to continue to see the cost of human services increase because we’ve refused to put the onus on our business owners to pay people a living wage,” Kenyatta said.

“It is a crime against God to exploit workers,” Holston said.

For West Oak Lane resident Stephanie Williams, payday is a cause for stress.

The 58-year-old health homecare worker earns $10.50 an hour, the same rate for the past three years. Although higher than the minimum wage, the wage is still low enough that she has to decide which bills to pay and which to delay each month.

William said she could relax if she earned $15 an hour.

“I [wouldn’t] stress as much,” she said. “I [wouldn’t] sit there staring at my bills, or throw them to the side and pretend they’re not there.”