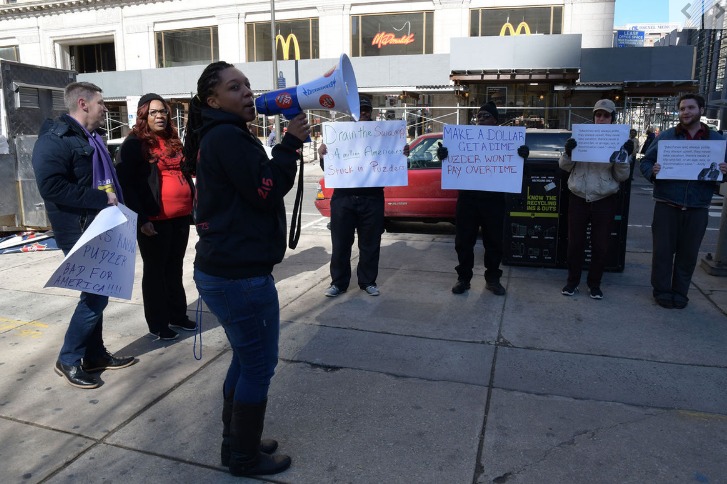 By POWER InterfaithFebruary 21, 2017No Comments

Days ahead of Andrew Puzder’s confirmation hearing for labor secretary, local workers advocating for a $15 minimum wage demanded the fast-food mogul withdraw his nomination or be rejected by the U.S. Senate.

Puzder, the CEO of CKE Restaurants, Inc. the parent company of the Carl’s Jr and Hardees chains, is expected to face a tough Senate hearing Thursday.

Democrats, workers and labor rights advocates have criticized Puzder for his opposition to increasing the federal minimum wage to $15 an hour and rules on overtime pay.

A group of about 20 fast food workers, members of SEIU (Service Employees International Union) Local 32BJ and faith leaders protested Monday afternoon outside of the McDonalds located at 1401 Arch St. in Center City.

Protestors such as Philadelphia native Alicia Hamiel were critical of Puzder’s stance on wages and overtime pay.

“I’m out here today to make sure that Andy Puzder does not make it because he doesnt care about workers,” said Hamiel, who works for McDonald’s. “Basically he wants robots to replace workers. He doesn’t think that workers deserve overtime.”

For the last five years, Hamiel has worked for McDonald’s, where she makes $7.25 an hour. Hamiel said she needs more money.

“I need to be able to survive, to support my family and to be able to not have to worry about what bills I’m going to be paying next,” said Hamiel, who has a one-year old son and is expecting another baby.

“I’m just tired of people trying to say that workers make too much or workers are out here and they are doing too much to try to fight for higher wages and a union, when in reality we are only asking for the bare minimum.”

The Rev. Gregory Holston, executive director of POWER, was on hand to express his support for the protesting workers. Holston said the city and the nation could be transformed by raising worker’s wages and lifting them out of poverty. He also expressed his opposition to Puzder’s nomination.

“We stand up against this nominee today because he has consistently shown that he does not believe that citizens and even his own workers should have a living wage,” Holston said.

“He thinks so little of workers, he would rather replace them with machines than to have the workers make a living wage to build families and prosperity in this country, and he has the nerve to stand up and say ’I should be Secretary of Labor.’ The secretary of labor is supposed to be a champion for workers.”

The protest in Philadelphia was one of more than two-dozen rallies held across the country on Monday to declare that Puzder is unfit to serve. Hundreds of fast-food cooks and cashiers also converged on CKE’s corporate offices in Anaheim, Calif., and on Hardee’s corporate headquarters in St. Louis, Mo.

“We are standing with workers all across the country because we cannot turn over the Department of Labor to an anti-labor, fast food CEO,” said Gabe Morgan, vice president of Local 32BJ, SEIU.

In late January, workers at Puzder’s restaurants filed 33 complaints with state and federal agencies alleging wage theft, sexual harassment, and retaliation and intimidation against workers trying to organize on the job.

While Puzder has faced much criticism, he has garnered support from groups such as the National Restaurant Association and the U.S. Chamber of Commerce.

The U.S. Chamber of Commerce urged the Senate and the Senate Committee on Health, Education, Labor and Pensions to confirm Puzder in part because, it said, he would be “the first CEO of a company to go directly to serving as secretary of labor.”