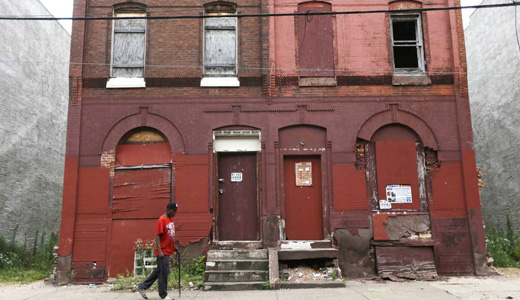 By POWER InterfaithJuly 27, 2016No Comments

This article is part of a series on the Democratic National Convention.

PHILADELPHIA – Thousands of Democratic Party delegates, members of the media, and political tourists have made the pilgrimage to Philadelphia for the convention where the first female candidate from a major party is seeking the office of the President on an agenda that prioritizes an economy that works for everyone.

There are few cities that could use that sort of economy more than Philadelphia. According to a new study entitled Black Work Matters, “many parts of the city are still reeling from the loss of hundreds of thousands of factory jobs”. With 23.6 percent of the city below the poverty line (and approximately 13 percent of those in deep poverty), Philadelphia is the poorest city in America.

The organization behind the study is Philadelphians Organized to Witness Empower and Rebuild (POWER), a coalition of over 40 faith congregations in a majority of the city’s 44 zip codes. Rev. Gregory Holston is the President of POWER and he introduced the problems the city faces to the Democratic Party’s Labor Council.

“In this major city, 40 percent of our children are hungry every night and as long as we can frame the issue around those children having a better life, we have justice and fairness and equality our side.

“It can’t just be about unionization, unionization has to be a tool we use to make their lives better.”

What was formerly known as “The Workshop of the World” has been left in the dust by de-industrialization.

This position has been made especially pertinent given the rhetoric employed by Republican nominee for president Donald Trump who has repeatedly promised to bring manufacturing jobs back to the United States, but who has also fought unions at his own hotels.

Holston concluded that Philadelphia’s booming service industry has the potential to provide the quality jobs that used to be provided by the manufacturing industry.

The next speaker was Yvette Jones, a representative of the Philadelphia teachers union, and she concurred with Reverend Holston’s analysis.

As a teacher, her and her union see the results of the high rate of deep poverty.

“Children show up hungry, tired, and ill prepared to learn. Traumatized by the violence in the neighborhoods. We can’t continue working harder with nothing in order to turn the tide of deep poverty.”

According to Jones, one of the keys to turning back the tide she speaks of is the transformation of schools into community schools in Philadelphia.

Community schools are distinct from traditional schools because they seek to become a hub in the community by identifying the unique issues plaguing students and providing social and health services to people who live nearby.

On July 20, Philadelphia announced the first 9 schools that will receive the extra funding to become community schools. The announcement of 16 more schools is set to follow over the next four years.

Michael Mulgrew is the President of United Federation of Teachers New York and he’s seen the wealth of benefits that can be wrought by successful implementation of community schools in impoverished areas.

The brick walls built into the school system for parents and teachers combined with the reticence to move on issues of poverty drove his local to pool their dues to experiment with different models.

“We had to create a model that fits the community because the community wants the responsibility of taking care of their children…” Mulgrew said, “Every community had different challenges.”

One particular community school provided eyesight tests for the children and found that 42 percent of them needed eyeglasses. Every school they had done it with since has had over 35% of the children needing eyeglasses.

“Can you imagine a bunch of fifth and sixth graders in school taking a standardized test, failing and nobody realizing they just needed reading glasses? This is about smart governmental policy and my union wouldn’t have been able to do this if we weren’t unionized workers,” concluded Mulgrew.

Mulgrew hopes the school experiments he and his union have pushed for can provide a basis for action in Philadelphia and across the country.

Photo: Not seen nightly on TV with all the glitter at the DNC is the deep poverty affecting Philadelphia. Poor housing, inadequate schools, and lack of jobs plague the city where more than 200 years ago the Founding Fathers declared the formation of a free and independent nation.   |  Matt Rourke/AP