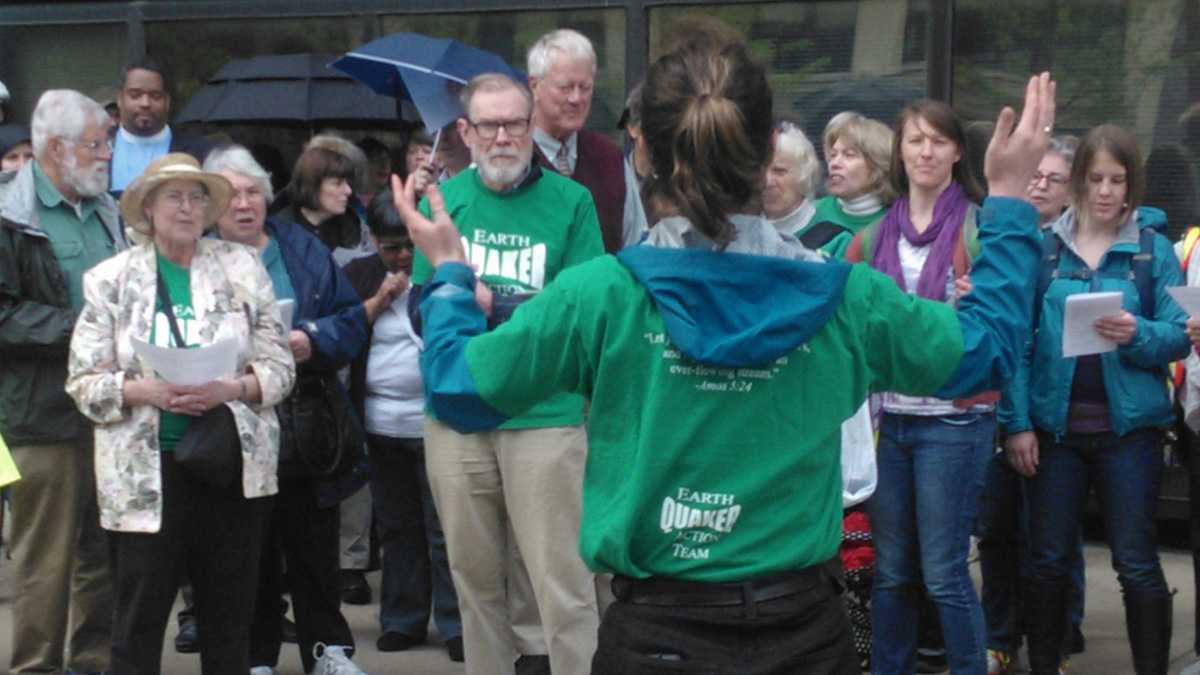 By POWER InterfaithMay 11, 2016No Comments

Urging PECO to buy 20 percent of its power from solar sources by 2025, advocates for solar energy and green jobs rallied in Philadelphia Tuesday. They say the utility has a responsibility to help create jobs while cutting its use of power generated by fossil fuels.

About 120 people led by the Earth Quaker Action Team and Philadelphians Organized to Witness, Empower and Rebuild gathered in front of the PECO building in Center City Philadelphia to call on the region’s biggest utility to sharply increase its purchases of solar energy.

Greg Holt, a spokesman for the Quaker group, said PECO is currently meeting only its legal minimum requirement of purchasing 0.25 percent of its total energy from solar sources.

Organizers said the increased purchase of solar power would meet the utility’s goals of increasing its use of renewable fuels while creating badly needed jobs.

“The fossil fuel economy is grossly unfair,” said Eileen Flanagan, board president of the Quaker group, in a speech. “It has made a few people rich and a lot of people sick.”

Flanagan said the demand that PECO buy 20 percent of its power from solar sources, though ambitious, is achievable.

“We don’t want to ask them to do something that’s impossible,” she said, noting that the organizers had consulted energy experts about setting a reachable goal.

Anticipating the utility’s objections that it is legally required to buy power from the cheapest source, Flanagan urged its officials to consider the long-term costs to the environment, and to human health, of continuing to use fossil fuels.

“We are asking them to think in the long term,” she said.

The groups’ demands represented an increase from their earlier call on PECO to buy solar power generated on rooftops in North Philadelphia, an economically challenged section of the city that organizers said would benefit from jobs created by the installation of solar panels.

The utility said on Earth Day in April that it would set up a “Solar Stakeholder Collaborative,” which will include the organizations leading Tuesday’s event as well as other utilities and environmental groups, to discuss ways of increasing its use of energy from solar. The collaborative group is expected to have its first meeting in June, said Cathy Engel Menendez, director of communications for PECO.

Whatever proposals come out of the meetings won’t allow the utility to boost its solar-power purchases to the level demanded by the demonstrators because it is legally required to buy power at the lowest cost — and that does not include solar, even though its cost is coming down, Menendez said in an interview.

“Those purchases are taken at the lowest cost, and that helps to ensure the lowest cost for all of our customers,” she said. “So going out and just purchasing 20 percent of the energy we need from solar, we would not be allowed to do that right now because it would not be able to meet that most reasonable cost.”

PECO currently purchases enough solar electricity to power about 2,000 homes a year, and 70 percent of its solar purchase comes from power generated in Pennsylvania, Menendez said.

Concern for the future

Demonstrators, many of them dressed in green T-shirts, gathered around six billboards depicting the five Philadelphia counties plus the PECO distribution area as a whole. Participants were invited to fix stickers to the boards naming groups or individuals in their communities who are sympathetic to the solar cause.

Sue Edwards, a retired educator from Swarthmore, said she had come to the event because she’s concerned about the future for her sons.

“I want the world that my sons maybe have children in to be clean and safe, and I don’t think we’re on the right path,” Edwards said. “It feels like we’re in a car with a drunk driver, and we’re heading towards a cliff. That’s what it feels like with fossil fuels but our politicians don’t seem to understand that.”

“PECO can do much better in terms of fostering energy that is clean and efficient,” Carluccio said.