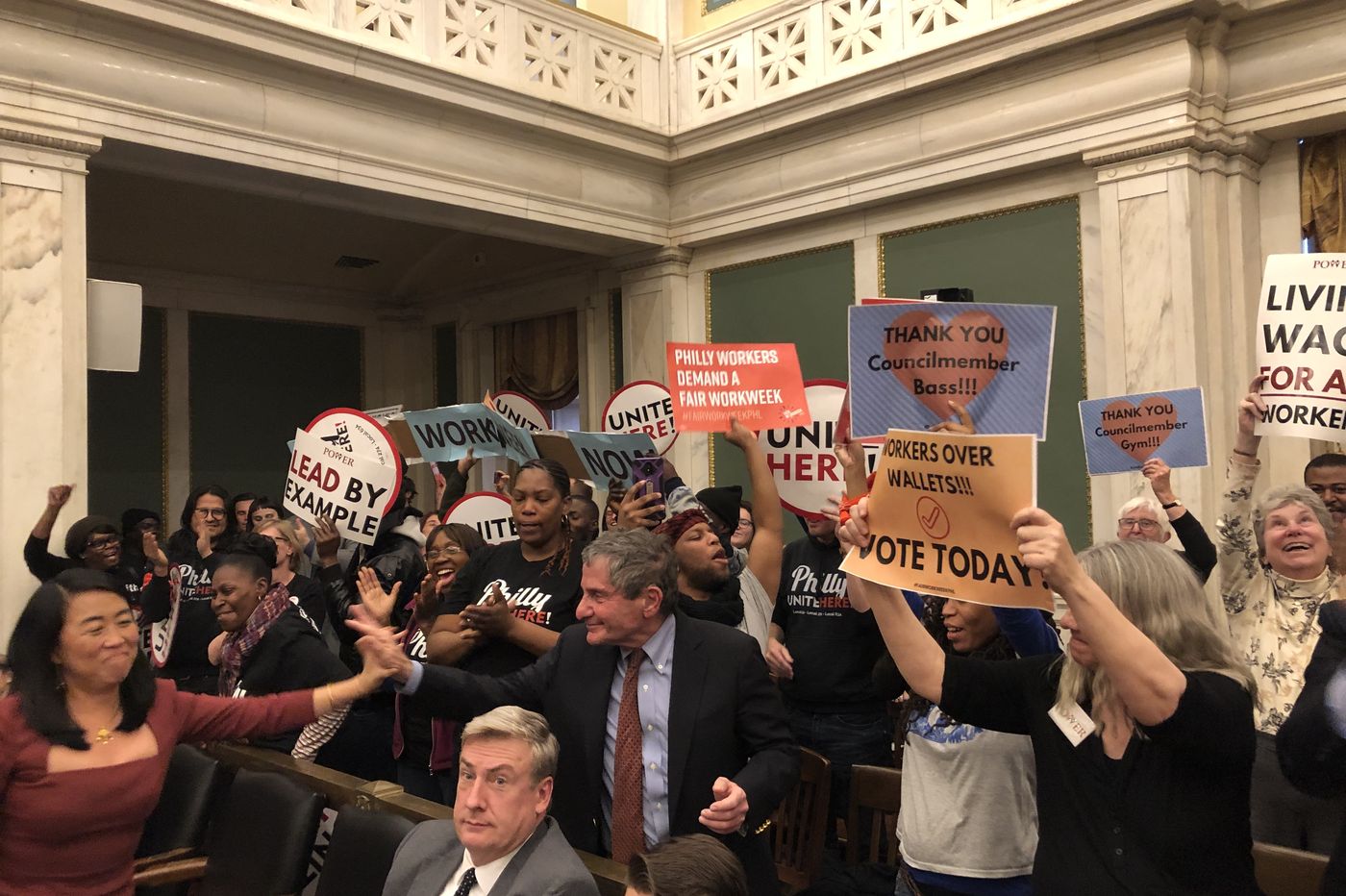 Terrence Wiggins is trying to support his family, but it’s been difficult.

The 24-year-old graduate of Olney High School left his job at a Target store two weeks ago because the company couldn’t accommodate his schedule — he’s only able to work daytime hours because in the evenings, he has to take care of a nephew who has cerebral palsy. Now, he works at Ross on City Avenue, where he’s in charge of making sure people don’t steal. But because he’s only getting 25 hours, he makes about $200 each week. His managers said they’re trying to make him full-time.

If he could even get 32 hours a week, he said, it would make a big difference to his relatives, including his grandmother, who has cancer.

“I’d be able to provide for my family,” Wiggins said.

A bill approved by City Council on Thursday and expected to be signed into law by Mayor Kenney could help him get those hours. The “Fair Workweek” legislation, part of a national movement to provide more predictability in the lives of retail, fast-food, and hotel workers, passed by 14-3, nearly a year after advocates and workers launched a campaign to fight for more predictable scheduling.

The bill would require employers with more than 30 locations and 250 employees to give workers two weeks’ advance notice of their schedules and offer “predictability pay” if schedules change after that. It also would requires employers to offer available shifts to existing employees rather than hiring new ones, a move that could help bring part-time workers, like Wiggins, closer to full time.

Council members David Oh, Al Taubenberger, and Brian O’Neill voted against the bill. O’Neill said he doesn’t think unionized workers, who are covered in the bill, need those protections. This was a part of the bill that labor advocates had fought for.

Thursday’s vote makes Philadelphia the second-biggest city in the country, after New York, to pass a scheduling law.

It’s expected to affect 130,000 workers, according to Councilwoman Helen Gym’s office, including those who are unionized (unless their contract stipulates an exemption) and hotel workers — Philadelphia would be the only city to pass a “Fair Workweek” law that covers the hotel industry. (Oregon’s bill also covers hotel workers.)

One possible threat to the law is a preemption bill under consideration in Harrisburg that would stop cities from passing workplace laws. State Rep. Seth Grove (R., York) has said these worker-oriented laws cause “multiple human-relations problems and compliance issues.”

Another major concern is enforcement: The Mayor’s Office of Labor would be in charge of enforcing the new rules, along with paid sick leave and wage theft laws. Richie Lazer, who heads the office, said he hopes to work more closely with community groups to spread the word about workplace laws.

Also Thursday, Council voted unanimously to raise to $15 the minimum wage for city workers and those employed by city contractors and subcontractors. That bill was introduced by Councilman Mark Squilla on behalf of Kenney, and it builds on a 2014 action that raised the minimum wage to $12 an hour. The city is not sure how many contracted and subcontracted workers the law would affect, but said it would likely include those employed by social-service agencies, like after-school aides and custodians.

“This is a time period when people feel like there’s such little movement for issues for working Americans,” Gym said Wednesday. “We in our city are choosing to do something about it, and I think it matters that we’re doing it in the poorest big city in America.”

The fight for the Fair Workweek bill, the latest in a national trend of cities and states passing similar laws, has been more contentious than the minimum wage hike. (No opponents to the wage bill testified at a City Council hearing in late November.)

Supporters of the bill, from the Democratic Socialists of America to the interfaith group POWER and labor unions, packed Council chambers during an October hearing and again the following month. Advocates hosted numerous rallies and marches throughout the year to keep attention on the issue.

The Greater Philadelphia Chamber of Commerce had opposed the bill, saying it would hurt business growth in a city that badly needs it. But Thursday, the chamber offered a milder tone in a statement: “While the ordinance passed today has objectionable components, the chamber looks forward to working with the city to further ameliorate its concerns.” It also suggested that changes could be made to how the bill would be enforced among hotels and franchises.

Other opponents included the Philadelphia Convention and Visitors Bureau, which said the bill would hurt the tourism industry in the city; chains like Wendy’s and Target, which have expanded their footprints in Philadelphia in the past year; and the Greater Philadelphia Hotel Association.

Gym, who introduced the bill with seven co-sponsors in June, sold it as “anti-poverty” legislation, said Ed Grose, executive director of the Greater Philadelphia Hotel Association, but he said that the typical hotel worker is not living in poverty. According to a survey conducted by the association, hotel workers make $44,000 a year on average.

Some hotel workers, like those at the Philadelphia Marriott Downtown, say that their unpredictable schedules can result in lower take-home pay, even if their hourly rates have been increased.

A coalition of traditional labor and “alt-labor”

The coalition that backed the legislation is notable for how it united traditional labor unions and groups backing nonunion workers, and speaks to a change in the labor movement. A traditional labor mindset might not support broad worker protections because it could hurt the case for unionization. Kenney, backed by unions, ran on a labor platform, but when Kenney was a councilman, he voted twice against a paid-sick-leave bill.
Times have changed. Lazer has been an outspoken supporter of the bill, as has the Philadelphia AFL-CIO. AFL-CIO member unions like Unite Here, the United Food and Commercial Workers, and the Communication Workers of America are covered by the bill.

It helped that in a letter sent last month, Pat Eiding, president of the Philadelphia AFL-CIO, asked Council to keep unionized workers covered by the bill. The AFL-CIO acts a spokesperson of sorts for many labor unions in Philadelphia.

How Philly’s bill compares with laws across the county

Philadelphia’s Fair Workweek bill is stronger in some ways than others across the country and weaker in others, said Rachel Deutsch, an attorney with the Center for Popular Democracy, a main organizer of the national Fair Workweek movement.

According to Deutsch, the bill’s strengths include that it:
– asks for employers to pay “predictability pay” to workers for changes in not only time of shift, but location,
– requires employers to provide more detail in their estimate of how many hours a job will entail and states that an offer made in bad faith is a violation.
– requires the employer to make the new fair workweek rules clear so that employees know their rights.