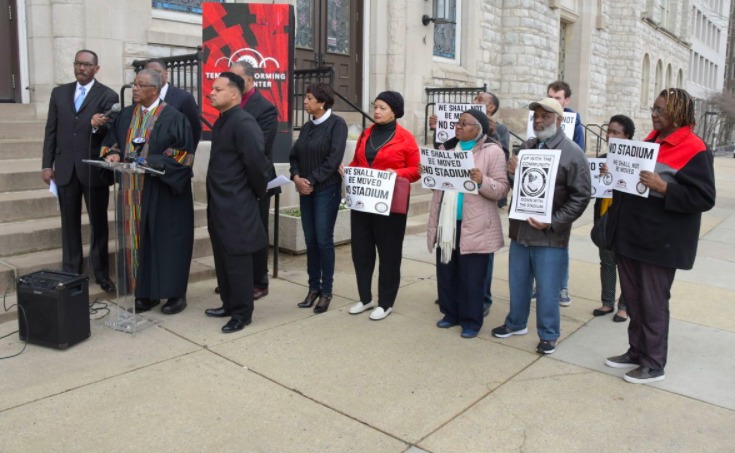 By POWER InterfaithApril 2, 2018No Comments

As Temple University presses forward with a proposed $130 million stadium, community leaders and groups continue to dig in for a long battle.

“It’s blatant disrespect,” said Pastor William Brawner on Friday about Temple’s recent unveiling of additional details about its 35,000-seat stadium and multi-purpose center in the face of neighborhood opposition.

“Since when does anyone tell a community what it needs?” he demanded.

At the second rally against the university’s proposed project within a week, Brawner spoke that day alongside more than a dozen other people outside the Temple-owned Baptist Temple on Broad Street and Polett Walk.

The groups reiterated their unilateral opposition to any proposal for a stadium, saying the project would increase traffic and garbage and noise in the area, and offer no benefits to the wider community.

“If we let this complex go forth, Temple will effectively have its foot on the necks of the residents of North-Central Philadelphia,” Pastor Robert Shipman said at the rally.

The brief rally, held on the sidewalk that morning as Temple students walked by, included Rodney Muhammad, president of the NAACP in Philadelphia; members of the Black Clergy of Philadelphia; the interfaith coalition Philadelphians Organized to Witness Empower and Rebuild (POWER); the community group Stadium Stompers; and residents.

Brandon Lausch, a spokesman for Temple, said in an emailed statement: “We continue to engage our neighbors on this and other substantial issues that are important to the residents of North Philadelphia.”

The multi-purpose complex proposal — which includes a 35,000-seat stadium, classrooms, research space, and retail space — would be build on the area bounded by 16th Street to the west, Broad Street to the east, Norris Street to the north, and Temple’s Pearson-McGonigle halls and the Aramark STAR Complex on the south.

This week, Temple unveiled additional details about its project, which included building the stadium 25 feet below the sidewalk level on two sides so as not to dwarf the nearby rowhomes.

Temple owns the entire footprint where the project is proposed to be built, which will be primarily funded by private donations and bonds. In addition, the project requires the demolition of a single university-owned building, and Temple does not need to purchase any private homes to make way for the multi-purpose complex.

The university also will seek city approval to close 15th Street between Norris Street and Montgomery Avenue as part of the project.

Temple is now discussing the proposal with the city’s Planning Commission, said a university spokesman earlier in the week. No plan has been officially submitted to the city as of Monday.

Muhammad accused Temple of failing to consult with the wider community about its proposal.

“There’s been no consult with the community on a wide scale,” Muhammad said. “Temple has just been moving forward with a group of hand-picked people that have assured them that the community was going to lay down and go for this, and that there wouldn’t be resistance.”

City Council members, Muhammad added, should remember who put them in office when considering whether to support the Temple proposal.

“[City Council members] weren’t voted in by Temple; they were voted in by us, the voters,” Muhammad said. “Temple can’t keep them in office.”

Brawner said he expected the groups to increase pressure on Temple as the university marches along with its proposal.