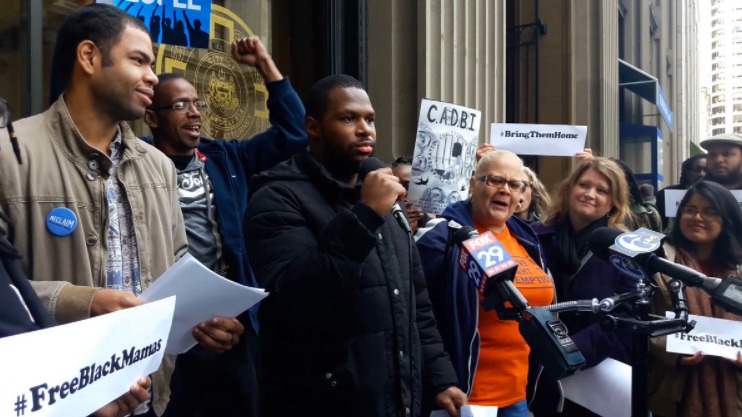 A group of civil rights and community organizations working together as The Philadelphia Coalition for a Just District Attorney has announced a set of action items they say need to be implemented by District Attorney-elect Larry Krasner.

Made up of the American Civil Liberties Union (ACLU) of Pennsylvania, Juntos, Philadelphians Organized to Witness Empower and Rebuild (POWER) and other organizations, the Coalition is pushing for immigration justice, juvenile justice, transparency and an end to the cash bail system, as part of their “First 100 Days” platform for Krasner.

“This isn’t oppositional. It’s a working collaboration,” said Rick Krajewski, a Coalition organizer. “We’re there to back him. We’ve been working on this platform for the last year [and] it was designed by survivors, community members, and people who have been directly impacted.”

“At the age of 16 I was locked up and charged as an adult and held in adult prison, pre-trial, for 18 months until my case was eventually dismissed. During that time I witnessed hundreds, if not thousands of people, being held solely because they could not afford to pay bail,” said Joshua Glenn, Coalition member and co-founder of the Youth Art & Self empowerment project (YAS). “[Krasner] ran on a platform of ending cash bail and that’s why we support him 100 percent…Nobody should be sitting in jail just because they are poor.”

Erika Almiron, Executive Director of Juntos, called for support of immigrants, stating that she knows “personally the fear” the community is feeling to “have a dictator as president” and that the district attorney’s office should not be colluding with “ICE (Immigration and Customs Enforcement)” and that the “First 100 Days” platform should be implemented.

“Make no mistake, the district attorney is ultimately accountable to the people,” she said in her address to the crowd. “There can be no accountability without transparency.” Mullen then suggested that Krasner initiate “a quarterly release of data on a publicly accessible website,” and “regular public forums particularly in neighborhoods brutalized by the criminal justice system.”

Before her remarks, Mullen noted that the ACLU Pennsylvania is involved in an ongoing case in which they sued the city for “stop and frisk” policies. “The city has incrementally improved but we won’t be satisfied until there’s no racial profiling,” she said.

“Ending destructive prosecutorial practices that target youth,” and re-sentencing for life prisoners without parole were also among the proposed ideas from the organizers.

“We need Krasner to start creating something to bring families together…to do policies that will heal our communities,” said Lorraine Haw, a member of the Coalition to Abolish Death by Incarceration (CADBI). “We need resources for restorative justice.”