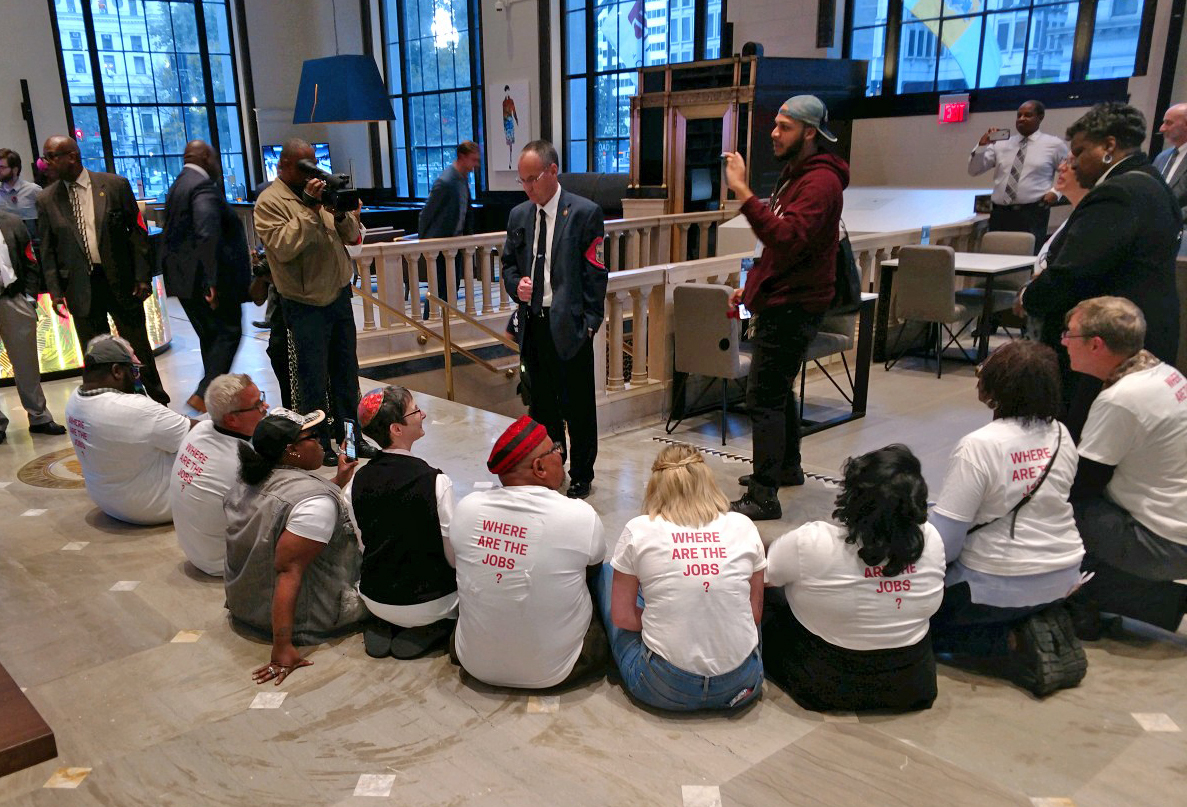 A group of 12 clergy and hospitality workers were arrested for staging a sit-in on behalf of workers’ rights at the Aloft Hotel on Thursday evening.

The sit-in was organized by the Center City Organized for Responsible Development (CCORD) with support from Philadelphians Organized to Witness, Empower and Rebuild (POWER) and UNITE HERE Local 274 to protest Aloft’s “abuse of government funds.”

According to a CCORD statement, Aloft, which opened on Aug. 31, “promised 170 jobs, 115 of which would be at a destination restaurant,” in their 2013 application for state funds. “The hotel is slated to receive $33 million of public subsidy — $183,000 for each hotel room, making these funds the most heavily subsidized hotel rooms in Philadelphia.” The subsidies include $2 million from the state Redevelopment Assistance Capital Program (RACP); $10 million federal Historic Tax Credits; $15 million federal New Markets Tax Credit financing; and a $5.9 million city property tax abatement.

“They were able to secure $33 million in subsidies with commitment to bring 170 full-time, well-paid jobs. Much later in the process, they decided they will only do 55 jobs and we’re saying, provide the jobs that were promised or the subsidies should be returned,” said the Rev. Mark Tyler, a POWER organizer. “They should give the subsidies back. We live in an age where persons who receive welfare are hunted down over petty things. Everything they do has to be accounted for and their lives are heavily monitored, yer corporations receive government welfare and there is no accountability.”

The group of 12 protesters that were arrested included clergy from different faiths — Christianity, Islam and Judaism — and hospitality workers from the airport and hotel industries. They sat on the floor of the hotel lobby and sang civil rights-era freedom songs, including “Victory is Mine” and “Ain’t Going to Let Nobody Turn Me Around.” After three requests from a Philadelphia civil affairs officer to leave the building, the 12 refused and continued to sing, prompting the arrests.

“If developers want to come to the poorest big city in America and ask the public to pay for their projects, we will hold them accountable to the promises they make. We demand that the Aloft Hotel either create the jobs they promised, or give us back our money,” said the Rev. Robin Hynicka, CCORD president and one of the arrested.

More than 100 other hospitality workers and organizers demonstrated outside the hotel at Broad and Arch streets as the sit-in took place. They shouted chants of ‘What do we want? Jobs! When do we want it? Now!” and had an impersonator of President Donald Trump fighting with the people over a $33 million check.

“If they promised to give us jobs, I want to see these jobs,” said Earlene Bly, a hospitality worker that lives in North Philadelphia and came out to protest. “If not, I want to see that money go in our schools, our parks. We need better housing. That money could be going to the homeless.”

A CCORD volunteer said that the next step is to wait for a response from Aloft or the developer HRI and that they are willing to have an “open conversation” with the companies. An elected official that has expressed concern for the federal New Market Tax Credit that Aloft received is Congressman Bob Brady. In June, he wrote a letter to the U.S. Treasury Secretary, stating that he was “deeply troubled” by the Aloft development project. He continued, “This project is neither located in a low-income community, nor will its benefits accrue to the residents of the surrounding neighborhood.”